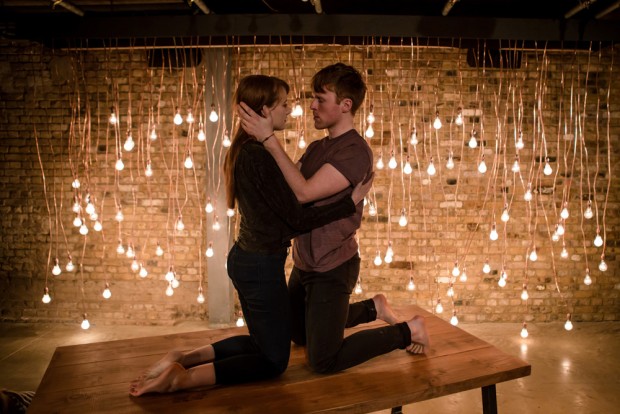 Despite the age of austerity, London theatre is booming. Not just the West End, but Off-West End and the fringe as well. One sign of its health is its openness to Continental imports, especially to plays that have been transposed into English by their own authors. If the market leader of this trend is Croatian-born Tena Štivičić’s 3 Winters, then the latest example is Maria Milisavljevic’s often equally compelling Abyss. This play originally opened as Brandung at Berlin’s Deutsches Theater in 2013, and it is still running in that venue’s repertory. It won the prestigious Kleist Award for Young Dramatists, and another production has recently opened at the Tarragon Theatre in Toronto. Now, in a version directed by Jacqui Honess-Martin, London audiences at the ever-enterprisng Arcola Theatre get a chance to see this poetically written story about a missing woman.

The events are inherently painful: one freezing cold night in Germany, four friends are having a party. Shit, they’ve run out of cheese. So 24-year-old Karla nips out to the shop, and doesn’t come home. The other three – her boyfriend Vlado, her best friend and the story’s nameless female narrator, and the narrator’s sister Sophia – begin to look for her. They start with desperate attempts to convince the police that she really is missing, and then they start to search for her themselves. Their quest takes them into the grim Russian quarter of the city, and they seek help from some unsavoury characters.

Emotionally, the suddenness and inexplicable nature of their loss results in a variety of trauma. And the attempts of these three to alleviate their pain result in complications: the narrator has a new boyfriend, Jan, which provokes jealousy in Vlado, who is attracted to her himself. So what does this imply about his feelings for the missing Karla? The theme of disturbed masculinity, with competition between the men for the love of the woman, comes across strongly as it weaves its way through the bruised sensibility of the trio.

And, gradually, the family life of Vlado emerges. His mother is Croatian; his father is Serbian. This means that he’s seen as suspect by the German police, who are as racist as you’d expect. At the same time, the politics of the former Yugoslavia and the history of the Balkans haunt the imagination of the European heartlands, seeping into the troubled heart of the play like black ink slowly billowing in stale water. Milisavljevic chooses to talk about these issues not in the form of journalism, but as a nightmare deeply rooted in feeling.

So images pile up on images, as screams echo through tempests, while skies burn and seas boil and bubble. Waves smash on far-off shores. The lost past smells of sun. But principally the poetic passages evoke the horror of nightmares, as the guilt and longing of the characters take centre stage. At times, this is enthralling playwriting, but it also has its problems. Often the feelings of the protagonists are clearer than the narrative of the story, which is rather obscure at the best of times. Sophia’s episodic account of the skinning of a rabbit, a metaphor as strong as the central idea of an emotional abyss, is powerful but not immediately comprehensible.

As a play about loyalty, sexual passion and family ties, Abyss is complex and gradually almost hypnotic in a kind of incantatory way. The love triangle between the narrator, Jan and Vlado — which sometimes reminded me of Abi Morgan’s brilliant Tiny Dynamite (2001) — is psychologically convincing, and Milisavljevic neatly undercuts and criticises the play’s identity as a cop thriller. Sadly, this magic is broken by an unnecessary interval in Honess-Martin’s otherwise enthralling and physically fluid, often inventively so, production. I was also slightly disappointed that, at the end, the play explains Karla’s disappearance: I wanted to stay in the zone of ambiguity.

Honess-Martin’s directing is elegant, both delicate and direct, with a good pace and attractive cast: Nicola Kavanagh portrays the narrator with a light touch, aching, reasoning and yearning. Iain Batchelor impressively plays both the mild Jan and the passionate Vlado, while Jennifer English portrays the coolly efficient and tightly wound-up Sophia. They are all well served by designer Lucy Sierra’s bare set, with its hard table, gymnastic bars and lightbulb sculpture, which flickers and blazes beautifully. Like the rest of the play, this mini-symphony of lights is both fascinating and a bit estranging.