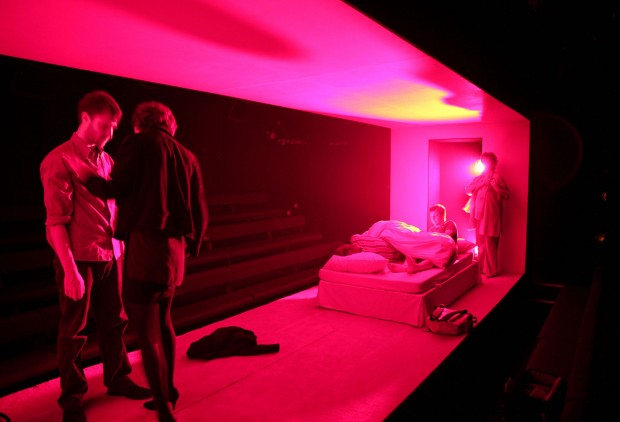 Can elections cause erections? In Jack Thorne’s new 90-minute play, 2nd May 1997, Tony Blair’s historic landslide victory over the Tories is the background to three stories about sex and love. As the media pumps out the election results, including the memorable Portillo moment, three very different couples in three very different bedrooms react very differently to the dawning of a new political age.

The first couple is seventysomething Tory MP Robert and his wife Marie. He’s about to lose his seat and defeat forces him to admit that his career has been less than glorious, while at the same time Marie stolidly counts the cost of her own self-sacrificing support of her husband. It’s a rather sad portrait of old age and ill health, a good metaphor for the departing Conservative administration.

In the second scene, Ian, a pleasant Lib Dem party-worker, brings home Sarah, a young and apolitical woman he’s met at an election party. She’s much more drunk than he is, and their encounter, as he tries to rebuff her sexual advances, is one of the most excruciatingly embarrassing episodes I’ve ever seen on stage. In a well-judged moment of theatrical daring, she whispers her most intimate secret to him while pumping Donna Summer music makes her words inaudible to the audience. Thorne neatly keeps us guessing. But although the scene is emotionally powerful, it’s hard to grasp its political point.

The third couple, 18-year-old sixth-formers Jake and Will, are two New Labour supporters who have fallen asleep together at some point in the early hours. The headiness of victory is nicely matched by their emotional uncertainties. Will is in love with Jake, but Jake can’t, or won’t, reciprocate. Added to that, class is an issue. Both know that while Jake looks set to go to Cambridge, Will is more likely to end up at Leeds. Despite the fact that they are united in euphoria, they are destined to grow apart.

As in his previous play, Stacy, Thorne is at his very best when he explores the acutely personal sensations of embarrassment and misunderstanding. He is a writer that has made the adjective “excruciating” his very own. In each scene, the mix of sexuality — whether exhausted, drunken or teenage — and politics is both emotionally charged and metaphorically rich. But although the play does give convincing snapshots of the lives of three couples, it suffers from the fact that there are not enough ideas to link the three scenes together. It should be seamless; in the event, it’s episodic.

Directed by George Perrin, on designer Hannah Clark’s versatile set, 2nd May 1997 starts off rather slowly, with Geoffrey Beevers and Linda Broughton as Robert and Marie, comes to excruciating — that word again — life with Phoebe Waller-Bridge’s amazingly brave performance as the drunken Sarah, and ends in a nice mix of hope and disillusionment with James Barrett and Jamie Samuel’s beautifully fresh performances as Jake and Will.

But if setting a play at the time of the 1997 election inevitably raises expectations that it will have something apposite to say about dying days of the current government, or the arrival of the next, Thorne avoids these issues and concentrates instead on moans, hormones and vulnerability. In this case, a quick blast of D:Ream’s “Things Can Only Get Better” provokes the obvious response: I very much doubt it.