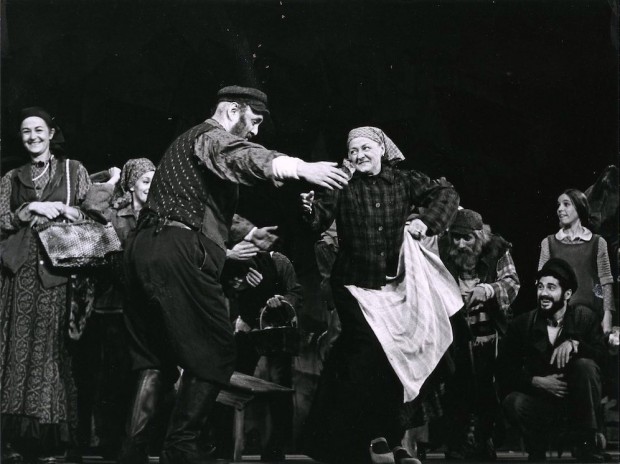 One from the archives: when Jerry Bock and Sheldon Harnick’s Fiddler on the Roof was first staged at Her Majesty’s Theatre in the West End in 1967, with Topol in the lead role, its director and choreographer Jerome Robbins arrived at the first preview, just in time to recreate his show, which had been rehearsed by his assistants. He didn’t like what he saw and, as actor Jonathan Lynn (who played Motel the Tailor) remembers, set about changing things, wielding a disarming smile: “He was appalled by the way the men danced the big numbers like the Wedding Dance. He smiled. ‘When you pirouette into the middle of the circle you look like you’re afraid to bump into each other.’ ‘We’re doing the steps right,’ said a defensive dancer. ‘I don’t do “steps”!’ The smile was now really menacing. In my dreams at night after rehearsals the smile sometimes seems completely divorced from the face, like the Cheshire Cat’s. ‘All movement has meaning. It’s based on character, and the dramatic situation. You’re meant to be farmers, workers in the fields, not campy West End dancing boys.’ Robbins could say that because he was gay, and political correctness had not been thought of yet. One of the dancers said, ‘It’s dangerous. We might get hurt.’ ‘Fuck that,’ he replied pleasantly and leapt up on the stage. ‘I’ll do it with you.’ He cued the accompanist. He danced it differently, tough and unflinching.” (Jonathan Lynn, ‘Don’t Be the Victim’, TLS, [2019])