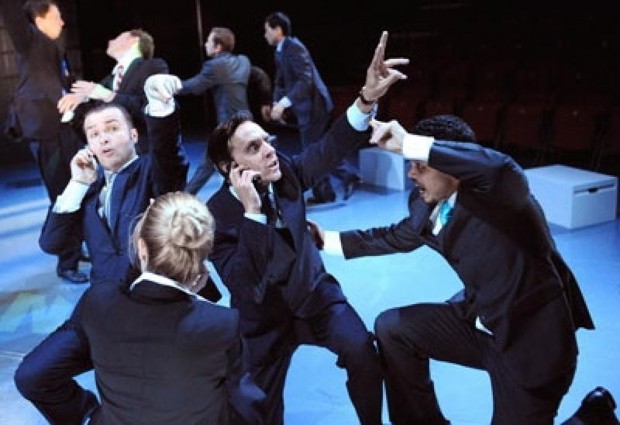 Curious to see what all the fuss is about, I went down to the Minerva in Chichester to see Lucy Prebble’s new play, Enron. Now I know. Not only is the text a model of lucidity, mixing thorough research with imaginative ways of giving lessons in business economics, but Rupert Goold’s excellent production for Headlong is full of neat touches. It all makes for a highly entertaining event, and, gratifyingly, the theatre was packed. Not only that, but the audience left the building discussing the play, Enron and globalised capitalism (bankers were mentioned, and abused, in passing). All very gratifying. But Enron is also the latest example of a tendency that seems to be inherent in live performance: you gradually learn to love the villain. Jeffrey Skilling, the mastermind behind the Enron scandal, is played by Sam West, who visibly grows from nerdy geek into a Master of the Universe, then crumbles into a paranoid jailbird. By the end, you can’t help liking him. And this is the man whose crazy antics not only created a multi-billion-dollar fraud, but who also ruined the lives of thousands of his employees. In reality, he’s a con man, a shit, in moral terms worth less than an ant’s arsehole. Yet, on stage we love him. But this is more than the Richard III phenomenon (the audience love the bastard who’s manic enough to compel its attention); this is the Sam West phenomenon (like many stars, he’s so personable you can’t help but love the character he plays). Does this mean that a play that’s critical of capital ends up being a quiet celebration of the worst side of the system?