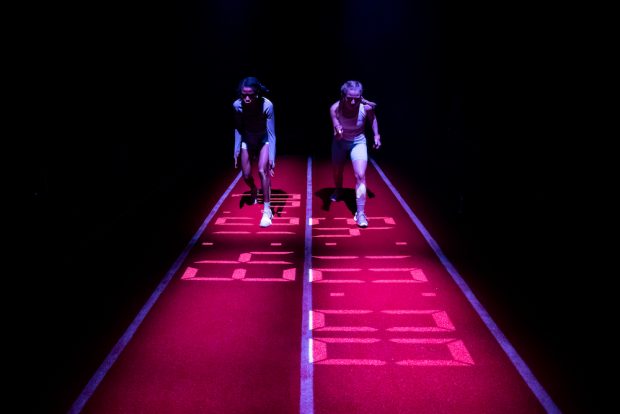 It’s a sign of the times that one of my last trips of the year, to Ella Road’s Fair Play at the Bush Theatre, was cancelled because of COVID. Not that much of a surprise really: it’s only one of many London shows that have had to take an extended break over Christmas. But it does mean that I can’t review it. At least, not in the normal way. I mean, I won’t be able to begin my review of this drama about two female champion runners by praising Road’s promising debut, The Phlebotomist, nor by name-checking previous sports dramas, such as Roy Williams’s Sucker Punch or Bryony Lavery’s Beautiful Burnout, both from 2010. Or Joy Wilkinson’s more recent The Sweet Science of Bruising. No, I won’t be able to follow up with some pun about running, such as “This dynamic two-hander tracks gender and race in sport”, nor to summarize the plot, which is about African-American athlete Ann, who joins young Brit star Sophie’s running club. Apparently, the two girls couldn’t be more different, but soon their shared passion makes them inseparable — they dream, I’m told, in lanes and lap-times, and wake up thinking of Olympic medals. In a play about female friendship, both supportive and competitive, I will not be able to describe how it’s put to the ultimate test. Nor will I be able to confidently compare the two young women, the working-class, religious background of Ann, with the more privileged blonde-pony-tailed and Adidas-sponsored Sophie, who has devoted her entire life to the sport. As for the show’s themes, I won’t be able to say how successfully Road explores the idea, surely influenced by Caster Semenya’s story, of elite sport rules about testosterone levels, and in general international sport’s implicit ideology of white supremacy. And what can I say about Road’s writing, as I can’t savour its precise delineation of the two young women’s voices, nor the way that she brings up issues of race, gender identity and personal responsibility while telling a deeply human story. I can’t even be sure that she uses a spirited mix of humour and emotional truth in depicting the rivalry of Ann and Sophie, and the thin line between love and hate. Likewise, I really can’t comment on the commitment and expressivity of the actors, NicK King (Ann) and Charlotte Beaumont (Sophie), or say much about how they show the tensions in their relationship. Or describe their on-stage energy. I won’t be able to appreciate Monique Touko’s directing, and especially the contributions of movement director Joseph Toonga and designer Naomi Dawson. If the production makes good use of Heather Small’s affirmative “Proud” I won’t be able to say. Lastly, I won’t be able to show off with a neat payoff line such as “this show will run and run”. Nor can I give it the four stars it probably deserves. But, hold on, maybe I can. After all, don’t I have a second chance? Fair Play returns to the Bush Theatre in January, with a streamed version online on 7–12 February. So I might get to see it yet…