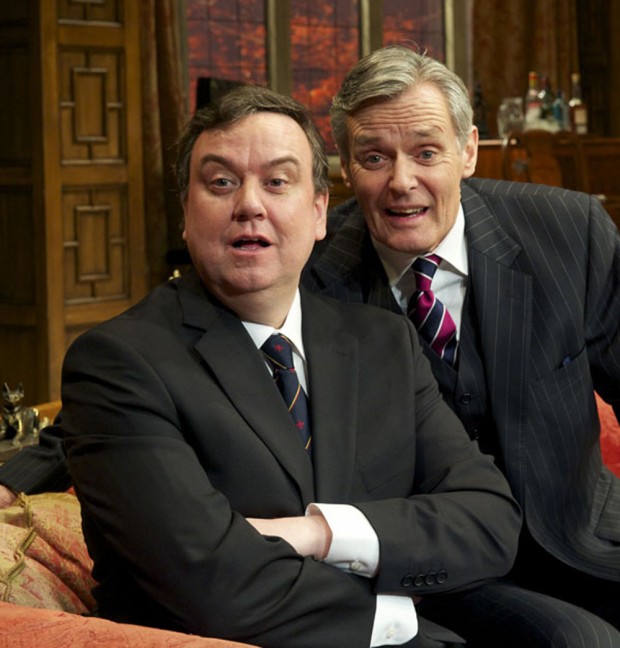 Situation comedy relies on strong brands, and some ideas just run and run. Yes, Prime Minister is the stage version of the long-running 1980s BBC television shows Yes Minister and Yes, Prime Minister, which memorably starred Nigel Hawthorne and Paul Eddington. This incarnation, first seen at Chichester last year, now returns, with a new cast, for a second West End season. But how does this trusty old brand stand up to the stresses and strains of current political life?

Updated to include references to the Coalition Government, the story starts, and indeed remains, at Chequers, with Prime Minister Jim Hacker — an unexpectedly topical name in the weeks in which the News of the World phone-hacking scandal went toxic — hosting a summit to discuss a financial bailout of Europe by the oil-rich fictional country of Kumranistan. In return, this Asiatic republic plans to build a pipeline across Europe in order to sell us its black gold. So far, so good. But a crisis is soon precipitated when the Kumranistani Foreign Minister demands an under-age girl for his evening’s entertainment. Can Hacker and his Cabinet Secretary, the legendary Sir Humphrey, suppress their moral qualms in the face of this national emergency? And what about the splits in the Cabinet, the falling value of the pound and the future of the entire European project? So many questions would be enough to perplex any politician, and offer plenty of chances for good gags.

Written by Antony Jay and Jonathan Lynn, the comedy of Yes, Prime Minister is as familiar as an old cardigan. Humorous, farcical and broadly contemporary (the appearance of Special Policy Adviser Claire shows how power at the top of British politics has shifted over the past 20 years), this is a show that is both laugh-out-loud funny and comfortably satirical. It is certainly a pussy cat when compared to the bare-toothed aggression of the BBC’s The Thick of It. The jokes about power and ineffectual politicians are good, but very undemanding. It’s a very English night at the theatre.

I liked the scenes in which Hacker’s private secretary, Bernard, replies to BBC questions by using a folder full of formulaic answers, each one more empty than the previous one, and Sir Humphrey’s long and convoluted set-piece speeches are models of passionate obfuscation and deviousness. Directed by Lynn, and starring Richard McCabe as Hacker and Simon Williams as Sir Humphrey, this offers much in the way of inoffensive comedy. The farcical scene in which McCabe, eyes bulging in terror and his face fixed into a rictus, hides under a table to escape the appalling consequences of the crisis are pure fun. Occasional explosions of spontaneous applause suggest that audiences appreciate, now more than ever, seeing their politicians taken down a peg or three.

Williams’s smooth definition of Sir Humphrey’s public-school snobbery inspires the requisite joy of recognition and the supporting cast — Chris Larkin as Bernard the private secretary, Charlotte Lucas as Claire and Kevork Malikyan as the Kumranistani ambassador — are entirely competent. Although the play struggles a bit to keep up with the appalling farce of political reality, I expect that new lines are currently being written about the relationship between politicians and journalists in the wake of recent revelations. If so, they are sure to bring even more applause.