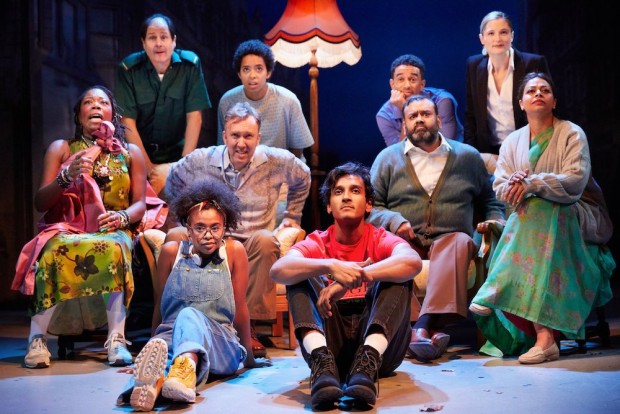 You can see why artistic director Indhu Rubasingham chose to stage this version of Zadie Smith’s classic White Teeth as part of the Kiln’s opening season. The bestselling 2000 debut novel is set in Willesden, Kilburn and thereabouts so it’s a good fit for what is essentially a play that pays tribute to the area’s multicultural character. Ironically, of course, the Kiln’s previous incarnation, the Tricycle Theatre is mentioned in the book, and Canute-like protesters outside the venue continue to campaign in vain for the old name to be reinstated. Forget about them: how does Stephen Sharkey’s adaptation cope with the novel’s multitudinous variety of voices?

In a radical rewrite of the original, the play starts with Rosie, a young dentist who is attacked — for reasons that are unclear — by Mad Mary, a Jamaican woman who inhabits Kilburn High Road and is blitzed out by apocalyptic millennarian fantasies. As Rosie lies in a coma in hospital, she is visited by her mother Irie who, encouraged by the doctors, talks to her, telling her the stories of the two families that are at the center of Smith’s book, and provides the answer to the question of who her real father is. As in the book, this is a story about the lifelong friendship of Archie Jones, a white working-class man, and Samad Iqbal, a Bengali Muslim, who first met during the second world war.

Here is where it gets complicated (a word often used in this story): Irie is the daughter of Archie and his much younger Jamaican wife Clara, while Samad, who works as a waiter in a curry house, is married to Alsana, and the couple have two identical twin sons, Magid and Millat. Samad is tormented by how difficult it is to be good Muslim in the West so he sends Magid to Bengal so that he can be brought up as a practising Muslim. Smith’s irony here is that Majid is increasingly Westernised, becoming a secular scientist, while Millat, after spending his early teens enjoying sex and drugs and rap music, joins the hilariously named KEVIN (Keepers of the Eternal and Victorious Islamic Nation), a fundamentalist group.

Because of their fathers’ friendship, Millat and Irie have known each other since infancy and when they are caught smoking dope at school they are sent for extra tuition to the home of Marcus and Joyce Chalfen, a middle-class family with highly academic aspirations for their son Joshua. Marcus is a scientist working on the comically named “Future Mouse”, a project aiming to cure cancer through genetic intervention. Because of his work he comes into contact with Magid and, when the latter returns to London, he quarrels with his Islamist brother Millat. Is Western science a human good or are its practitioners usurpers of God’s creation — and therefore blasphemous?

Sharkey’s version follows the novel in having several rewinds, and then fast forwards, which are often a bit confusing, and this is one of those plays which really need some prior knowledge of the original to make any sense at all. Clarity is not helped by the decision to stage the story as a play with music, with several song and dance routines, none of which are particularly thrilling or memorable, although a couple have a comic touch, usually involving Mad Mary, who acts as the story’s narrator. The play milks the local references for all they are worth, and succeeds more or less in celebrating the “multi-culti London muddle” which is part of the novel’s appeal. But its music and energy are not a patch on the Young Vic’s Twelfth Night.

In fact, for all its faults, Sharkey’s adaptation does respect the broad harmonies of Smith’s original, with its scenes that resonate with each other, and its strong metaphorical content: teeth that remain white whatever an individual’s skin colour; the role of randomness (flipping a coin) versus design; gun shots that miss. In some moments you can even hear Smith’s distinctive voice, although her fans will miss Samad’s epic masturbations, Joyce’s cringing middle-class blunders, and Joshua, who gets barely a line. Also sadly missing is the wonderful tale of Samad’s putative ancestor Mangal Pandey, a Hindu soldier famous for firing the first shot of the Indian Mutiny of 1857 (he missed). But, in compensation, Irie’s passionate attraction to Millat gets centre stage, and the role of Islamism makes the story hotly contemporary.

One of the other big themes of the original novel, the idea of the end of days, is often reiterated by Smith and here is likewise present. Archie meets Clara at a hippie End of the World New Year’s party while Clara’s mother is a Jehovah’s Witness, a sect which precisely and wrongly predicts the Second Coming. But, perhaps most presciently, this apocalyptic sense of the end of an era also reflects the date of the novel’s original publication, a year before 9/11. By discussing, even in a largely comic way, the rise of militant Islamism — at one point Millat and KEVIN go to Bradford to burn Salman Rushdie’s Satanic Verses — Smith is almost visionary in her anticipation of the War on Terror.

By expanding the roles of Mad Mary, a minor character in the novel, and Rosie, who hasn’t even been born yet in the original, Sharkey’s adaptation has the effect of tilting the gender balance more towards the women — Rosie, Irie and Mad Mary — and emphasizing the idea of the multicultural present as a successful melting pot in which everyone has a comedic role. Although I’m not very impressed by Paul Englishby’s music, I can certainly appreciate how it pastiches the sounds of the past, from music hall to Boy George to hip-hop, and its message is that pop culture helps the migrants to blend in harmony, celebrating the sheer vibrancy and unpredictability of the way different peoples can rub along together. So although this is a rather tuneless and toothless hymn to Kilburn High Road, you just know that its heart is in the right place.

Rubasingham directs effectively, on designer Tom Piper’s simple set, although the song and dance sequences strike me as messy and often half-hearted. The cast is large and diverse. Ayesha Antoine is a mild-mannered and sincere Irie, while Amanda Wilkin has an attractive calm openness as Rosie. Richard Lumsden and Tony Jayawardena play Archie and Samad almost as a cautious double act, while Assad Zaman is satisfyingly expressive as Millat. Best of all is the scene-stealing Michele Austin as the larger-than-life Mad Mary, who is full of fun and at one point, during a PTA meeting, transforms with a sudden change of accent into a middle-class teacher. They all contribute to an evening which balances uneasily between fun and muddle.