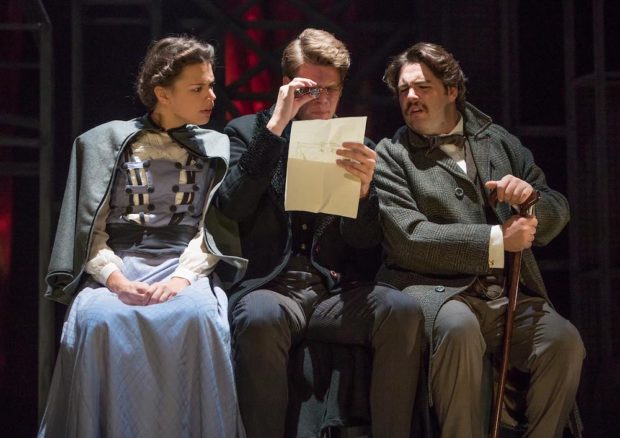 Earlier in the week, I watched the enterprising Blackeyed Theatre’s touring version of the classic Sherlock Holmes novel The Sign of Four. First published in 1890, the story involves the solution of a missing father and stolen jewels mystery, set in south London, in which Mary Morstan enlists the famous detective and his side-kick Dr Watson. As the legendary sleuth demonstrates his powers of detection, while also giving evidence of his habitual drug use, the adventure jumps into action. Arthur Conan Doyle’s original story has a slightly distasteful historical context, involving as it does India and Empire in the heyday of British imperialism (Conan Doyle has Sikh characters with Muslim names), but director and adapter Nick Lane’s version is nevertheless sensitive to contemporary sensibilities and the storytelling of a complex tale is brisk and clear. Some additions, including Holmes’s bare feet and a joke about facts, are very agreeable. With music by Tristan Parkes, on Victoria Spearing’s minimalist set, the show has a theatrical vigour and intrinsic interest to all Holmes fans. Energetic performances by Luke Barton (Holmes), Joseph Derrington (Watson) and Stephanie Rutherford (Morstan) are all good. Produced in association with New Theatre Royal Portsmouth and South Hill Park Arts Centre, and seen by over 50,000 people across the UK, The Netherlands and China, this stage adaptation premiered in September 2018. Shot by Clive Elkington and James Hastings, this is a rather rough-and-ready archive film, but it well conveys the theatricality and humour of the stage show.