Home » Reviews » We Want You To Watch, National Theatre

We Want You To Watch, National Theatre 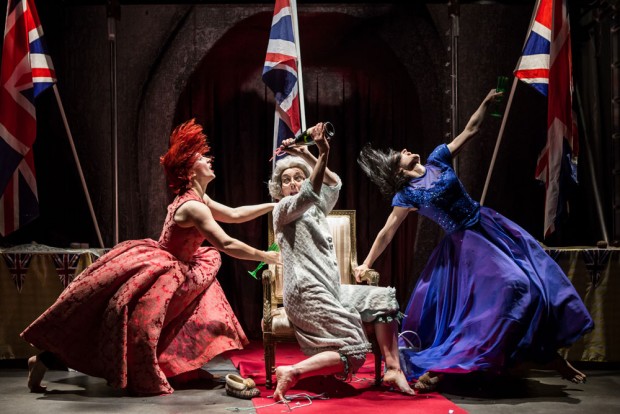 You can see what I mean about this not being a literal show. Of course, some of the best satire thrives on exaggeration, on pushing ideas to their logical limit, so the general argument of the play could be described as refreshingly extreme. And the script is clear: we are not against sex; we just hate pornography. The trouble is that the sketches performed by RashDash, whose work features rawness, music and dance moves, are often clumsy, charmless and rather uneven.

In the first one, two women cops — played by Greenland and Goalen — beat up a male suspect because they believe that his addiction to violent online sex has led to the death and dismembering of a young woman. It’s a sketch which questions the stereotypes of vicious policemen and argues that disturbing sexual fantasy is almost the same as violent acts. When these women petition the Queen (played by Helena Lymbery) there’s a strong and memorable sequence in which they illustrate what watching porn feels like: brutish, hard, awkward, mindless, unlovely. A kind of repetitive banging. Then the Queen illustrates what, by contrast, sex feels like. It’s funny, frantic, delicate, sexy, ridiculous, intense, heartfelt. A soft, warm and firm unfolding. It’s the best illustration, actual and metaphorical, of a female orgasm that I’ve seen on stage.

But the rest of the show is a bit disappointing. There’s another metaphor — tins marked SEX — which suggests the commodification of desire, but its stage presence is weak. Performances, with help from Adam Charteris, Lloyd Everitt, Bettrys Jones and Peter Markinker, are often raw, but not always in a good way. There is a raucous atmosphere which can’t quite disguise the fact that the play feels oddly inconclusive and tentative, as if it didn’t quite believe in its own message. Like Blurred Lines, which was a devised feminist piece in the same studio space last year, this play can’t quite shake off a feeling that it is a student show.

Still, there are some moments that are enjoyable. Her Maj boogies to Beyoncé; the orange-suited master hacker who has the awesome power to close down the internet is a dominating tyrant; at the end, there’s a lovely episode of mercy as the cast help an old man, lost and burdened, to find his home. But the argument of the play finally feels superficial and lacking in nuance, while the staging — directed by Caroline Steinbeis and designed by Oliver Townsend — is too crude. Having said that, I’m in two minds about this show. Perhaps because I love its project, but not its execution. Good intentions are sadly not enough to make up for lack of content. As so often, the absurdism of the style means that the play’s ideas are perhaps too easy to dismiss. And that’s a real shame.