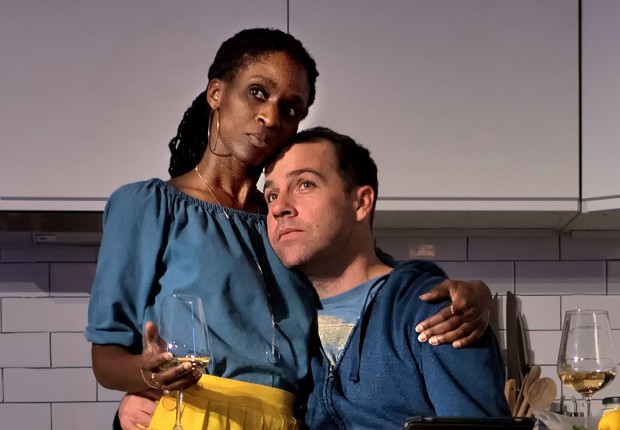 What does it mean to feel contemporary? Feel. Contemporary. Really feel. According to theatre-maker Chris Thorpe, whose new play Victory Condition has just opened at the Royal Court in tandem with Guillermo Calderón’s B, being contemporary is a really disturbing mixture of feeling all-powerful and completely powerless. In a short two-hander, Thorpe emphasises that something is very wrong at the heart of daily life. We all know this; we all feel this. But what is it? Well, it’s the sense that everything is on the verge of breakdown.

Set in a modern new-built flat, Victory Condition is basically two intersecting monologues, one male and one female. The Man is employed by a repressive state as a member of a special unit, and his mission is to assassinate key people who are demonstrating in the city’s central square. Positioned in a disused building, high above the demonstrators and their make-shift barricades, he trains his rifle sights over one particular figure. As his finger hovers over the trigger, he is one breath away from changing history. We could be in Ukraine in the recent past, or, even more disturbingly, this is a reminder of the atrocity in Las Vegas, where a lone gunman did terrible damage.

The Woman, by contrast, is employed in a high-tech office. She is something to do with graphic design, with advertising, with product development. Upstairs, one of her colleagues has helped design the logo of a cute bear on a can of sparkling pomegranate juice, the kind of fizzy drink which is advertised optimistically, with the implication that if you buy it, “you’re going to live forever”. But she has apocalyptic thoughts; her work mates seem to be holograms. She imagines dying of a brain haemorrhage on the underground. And somewhere, in the city, she is obscurely connected to a little girl, who has been abducted and is being used for sex.

What both Man and Woman share is a will to self-destruct. Thorpe very cleverly and very intelligently shows that their acts have a nihilistic self-defeating flavour. Both are agents of the system, but both seem ready to self-destruct, and to bring the system down. The title “Victory Condition” refers to a crucial moment in a video game, when you can either win or lose. In the play, the stakes are equally high. Imagine, implies Thorpe, that the future hangs on a series of moments when isolated ordinary individuals have the power to change everything. Imagine also that they are self-destructive.

This idea of ordinary individuals is underlined by the play’s staging. Vicky Featherstone’s sympathetic production, on Chloe Lamford’s shiny set, follows Thorpe’s playtext faithfully, with Man and Woman represented as Mr and Mrs Normal, returning to their new flat after a holiday abroad. They drag in their luggage, they change clothes, they wash, they eat a takeaway pizza, they play a video game. They are part of the banalisation of everyday life, as in thrall to the spectacle as anyone else. In this era of the total domination of capitalism, they are us, and we are them.

Thorpe’s text contains a couple of nods to Sarah Kane, and Caryl Churchill, but the dark angel hovering over the play is JG Ballard, the seer of Shepperton. Every action suggests that Ballardian sense that despite the feeling that everything is normal, we are all only a couple of steps away from apocalyptic breakdown. The system is fragile; weak. So what saves this play from being a rather trite exercise in postmodern relativism is its pervading feeling of dreadful anticipation of disaster. Behind the facades is nihilism. Collapse. In a prose that is deliberately drained of effect, Thorpe follows psychotic trains of thought.

With its quirky emphasis on the logo of a sweet soft drink, on the closed systems of thought and control, Victory Condition is a delirious satire as well as a troubling vision of imminent collapse. In a mere 55 minutes, Jonjo O’Neill as the charming Man and Sharon Duncan-Brewster as the coolly controlled Woman create a coherent world in which their monologues come across as the kind of private thoughts we might all share. At times difficult to fully understand, at times almost willfully obscure, at other times frustratingly unclear, this is nevertheless a powerful piece of new writing — and a stunning evocation of the nihilistic reality of the contemporary world.