Two Into One, Menier Chocolate Factory 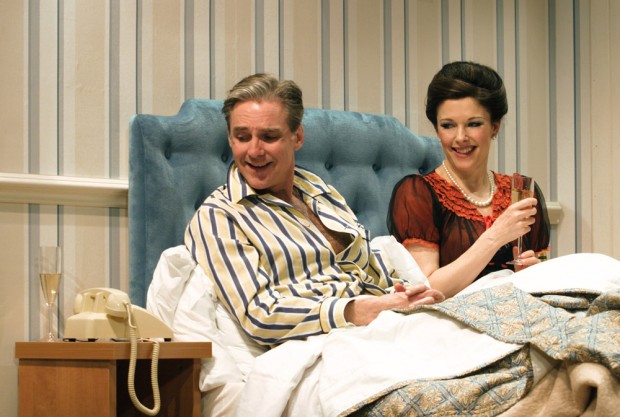 Political farces always start with a distinct disadvantage — the reality is so much sillier than the fictional version. Never mind, if anyone can make a stage comedy funny it is Ray Cooney, who is not only one of the most entertaining playwrights of our age, but also a national treasure in his own right. This play, originally written in 1984, predates the recent dip in the popularity of MPs, and also features a neat cameo appearance by its author.

The set-up is classic. A Cabinet Minister, called Richard Willey (yes, really), wants to have sex with Jennifer, a secretary at the Palace of Westminster. Both, of course, are married to someone else and it’s no spoiler to say that Richard’s wife and Jennifer’s husband turn up at the same hotel where the afternoon assignation is taking place. Fuelling the misunderstandings is Richard’s own Private Secretary, George Pigden. Add one disapproving hotel manager, a waiter who claims to know kung-fu and the morally correct anti-vice campaigner Lily Chatterton, and the brew is ready to cook.

And it does bubble. Very quickly. As you’d expect from a Cooney farce, Two Into One has moments when you just can’t help yourself — a spasm of convulsive laughter grips your throat and leaves you gasping for air as the tears stream down your cheeks. Cumulatively, there’s a risk of an aching stomach, although tonight there was no one actually rolling in the aisles. Yes, it’s funny. And fun. But I couldn’t help but think that there is something very safe about the 1980s setting. The Thatcher era is now a haven for nostalgia. The prowling anti-vice campaigner Chatterton is never dangerous enough to really raise the stakes, and the prospect of a parliamentary vote on a bill to outlaw pornography is mentioned as a really serious issue — and then quietly forgotten.

In its place, Cooney gives us a vision of humanity as a roaring tribe of stiff cocks and damp pussies forever trying to get their ends away. There’s nothing innocent about these misunderstandings and, since consummation is so rigorously withheld, the evening is one long frustration. Here, laughter is a poor substitute for orgasm.

Despite the mentions of Thatcher, the farce’s rather cynical view of Westminster politicos as sexually obsessed predators feels more general than specific, and the evening soon becomes one happy party, a sexual playground peopled by randy husbands playing away, unsatisfied housewives longing for excitement, straights mistaken for gays, with a random suggestion of cross-dressing and bisexuality. Yes, it’s a perfect festival of stereotypes — and this makes you long for a play that might, just might, scare the horses.

Cooney himself directs this conventional farce with reasonably clockwork precision, and plays the minor role of the waiter with enormous charm (very inspiring for an octogenarian). As Richard, Michael Praed exudes an oily smoothness while Josefina Gabrielle as his wife is amusingly desperate. Nick Wilton’s Pigden is a lovely mix of hopeless helplessness and wild mania. If at times the actors are upstaged by designer Julie Godfrey’s versatile set, which efficently transports us from hotel lobby to each bedroom in turn, this remains a modern classic which will not disappoint the fans of Cooney.