The Trial of Ubu, Hampstead Theatre 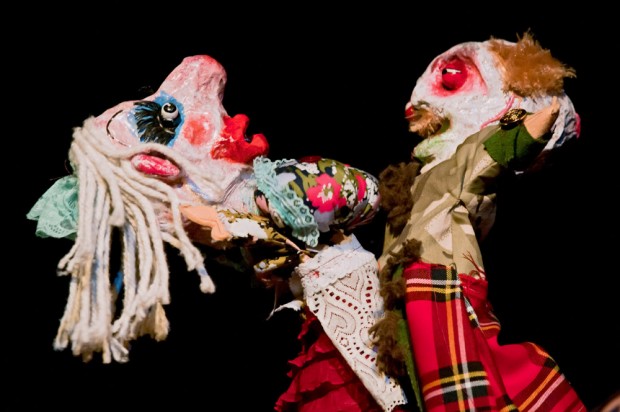 Some theatre openings will be legendary for all time. One such was the Parisian evening of 10 December 1896 when Alfred Jarry’s character Père Ubu stepped onto the stage at the Théâtre de l’Oeuvre and intoned “Merdre!” (roughly translated as Shittr!). The effect was electric, and the scandal outlasted the show’s run. In Simon Stephens’s new version of the play, which opened tonight, the original story has been supplemented with a longer second half that updates the action to today, and sees mad boy Ubu tried for war crimes.

As an exponent of the imaginary science of pataphysics, which is fascinated by exceptional events and parallel universes, Jarry pioneered an absurdist sensibility which embraced the juvenile, the weird and the exhilarating, and then pulled its pants down and farted in our faces. In his King Ubu, he elaborated on the monstrous character Pa Ubu, who — in a wicked parody of Macbeth — is pursuaded by his wife, Ma Ubu, to murder Good King Wenceslas, seize the throne of Baleshnik and grow fat on the country’s taxes. It all ends in mass murder, but his rule is overcome by a Russkie invasion.

Stephens’s version of this absurdist classic is mercifully short, about 15 minutes, and is performed in Katie Mitchell’s vivid production as a puppet play. This gives free rein to the knockabout humour of the original, and metaphorically grounds Pa Ubu’s atrocities in the amoral world of Punch and Judy. Starting with the sight of Pa Ubu sucking himself off, followed by an exclamation of “Ah shitters!”, the story tumbles along, peppered with references to the punishment of bankers, delightfully coarse sex jokes and lots of farting noises. There’s a childlike joy in these excesses.

Suddenly, the puppets vanish. We are now in Trial Room 2 of the International Criminal Tribunal in The Hague. The dictator Ubu has been arrested and has to stand trial for crimes against humanity. The court procedures — elaborate readings of long indictments, meticulous cross-examination of witnesses and the recording of their testimony — is the formal frame which, just like the pantomime puppets, distances the audience from the horror of a megalomaniac’s atrocities. Mitchell’s stroke of genius is to distance us still further by playing the whole of the dialogues of the trial through the mouths of two interpreters (Kate Duchêne and Nikki Amuka-Bird). Because the trial lasts 436 days, these scenes are occasionally speeded up as a clock ticks furiously, and the passage of time is indicated by subtle changes in lighting, which show the passing of the seasons, and rapid costume changes. Likewise, we see how the relationship between the two women develops, and the various gestures of help they give each other in what is clearly a high-powered, but demanding and repetitive job.

The court testimony in this 90-minute piece is a multiple parody of Jarry’s play, or tribunal theatre and of the workings of the International Criminal Tribunal. Dreadful events are coolly discussed and the cross examinations are alternatively factual, disturbing, boring, unconsciously ludicrous and chillingly exact. As the interpreters fuss around with their throat sprays, glasses of water and handbags, a distinct image of the banality of evil pervades the room. At one point, one of them is so busy with her magazine that she ignores the court.

Less successful is the scene which shows a dialogue between the prosecuting attorney and the defence lawyer, and which glancingly explores the ethics of the legal system. Equally brief and equally unsatisfying is a scene in which Pa Ubu (Paul McCleary) chats to his jailer. Sadly, we never really get inside his head, and that seems to be a missed opportunity. For while the production faithfully mimics the form of an extended judicial procedure, it never really illuminates it. For all of its theatrical brilliance, and some of Stephens’s writing has a strong metaphorical resonance, the content remains as inert as a pile of dusty court testimonies. Neither the horror, nor the politics, is fully explored.

Still, there is a Continental tautness to this production, designed by Lizzie Clachan, and, from Duchêne and Amuka-Bird, some of the most precise, convincing and committed acting you’re ever likely to see on the London stage. Stephens’s text is clear and his parody of court procedure is well judged, while his short evocation of Jarry’s original is sheer fun. Although The Trial of Ubu doesn’t give the audience enough to get its teeth into, its bizarre and macabre nature is dressed up to look and sound very good.