This Beautiful Future, The Yard Theatre 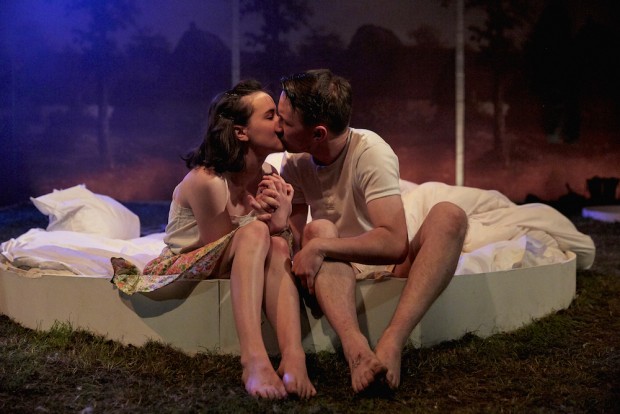 What is theatrical magic? I must admit that I don’t really know, but I can tell you what it’s not. It’s not bog-standard naturalistic plays with predictable plots in one-room sets with standard characters and everyday language. These kinds of plays are okay in their way, but they don’t often make you sweat with pleasure. No, real theatrical magic is something else, something plus, something beyond what you’d expect. Something new. Something more. Something better. You know it when you experience it.

In the case of Rita Kalnejais’s This Beautiful Future the magic is there from the start. As two young actors appear on stage, two older actors follow and occupy the twin karaoke booths on either side of the set. Here the magic of music will enhance the love story played out by the youngsters. But where are we? It is August 1944 in Chartres, and Elodie, a French country girl, is meeting Otto, a young German soldier. She is 17; he is 16. Despite the fact that they are on opposite sides of the war, tonight is a special night. Although they have bumped into each other before, they now plan to consummate their attraction. Yes, it is an exciting night of teen love. An underwear picnic.

But the play also has that rare quality: the unexpected. Into this story of sleeping with the enemy Kalnejais throws a bouquet of surprises: Otto believes that tomorrow the German army will at last be invading England, which suggests that this will be a play about alternative reality, a kind of prelude to Len Deighton’s recently televised SS-GB or to Robert Harris’s Fatherland. Or, is Otto just deluded, a teen victim of Nazi propaganda who is gullible enough to believe anything the Führer says. Likewise, Elodie is looking after a small warm egg she has salvaged from a ruined hen coop; she thinks she can hatch it. Is she deluded, and isn’t it a bit risky to spend the night with the enemy? Isn’t this collaboration? A crime.

As the two older actors, Alwyne Taylor and Paul Haley, sing parts of love songs — from Charles Trenet’s “Boum” to Adele’s “Hello” — Otto and Elodie get to know each other better. It is the first time that either of them has experienced the feeling of love, and this encounter is beautifully written by Kalnejais, and acted by Bradley Hall and Hannah Millward. The scene is so lovely in its conception, being full of tenderness, full of tact and full of tactile affection. Above all, the scene is full of feeling, of the confused feelings of typical teens. When Elodie shows Otto the egg it’s clear that this is such an apt symbol: doesn’t first love feel so strong that it can generate life?

Otto and Elodie’s story is delicate and loving, but it takes place in the context of hatred and brutality. Although Otto is awkward and fresh-faced, he knows about firing squads and about ethnic cleansing. Although Elodie is energetic and bright, she has seen the effects of bomb blasts and the deportation of Jews. But, as they splash water on each other or have a pillow fight, the larger world seems far away. Until it crashes in on them. Kalnejais explores this contrast between the sense of small lives being lived within the actions of large lives, Hitler’s, Churchill’s, Stalin’s, by suggesting that no one ever knows how the mess of history will turn out, how no one knows whether the future will be beautiful or not. After all, argues Otto at one point, “Mr Hitler started out as nobody. I mean… like you or me.”

Jay Miller’s excellent production maintains a perfect balance between the innocent naivety of the youngsters and the bigger historical realities, with Hall lending Otto an appealing gaucheness while Millward’s excited Elodie is full of life and imagination. Designer Cécile Trémolières’s set mixes the grass of village life with the bed in which the kids will lose their virginity, and the background has a picture of rural France, an image repeated three times on the back wall. The playwriting is adventurous and touching, the acting is great, and the overall spirit of the production is simply magical. For buffs, there are echoes of Sarah Kane’s Blasted, of Forced Entertainment and even of Frantic Assembly, but for everyone else there’s just pleasure. By the end, there is a moment in which the truth of death is matched by a breathtaking image of life. It’s so wonderful that you just know that new writing can sometimes promise a beautiful future. Yeah. Magic.