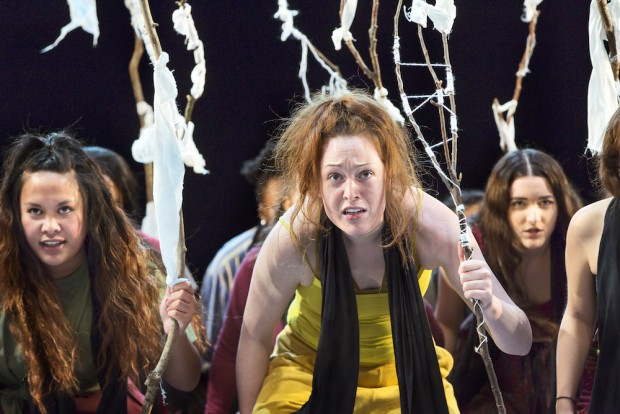 Asylum is one of the most emotive words in the English language. It evokes vallies of pain, agonizing journeys and arrivals that are watered by tears. It means human misery, and political and social issues of huge magnitude. It also suggests the possibility of change, and of kindness and of hope. At the time of the European migrant crisis of 2015–16, David Greig, playwright and newly appointed head of the Lyceum Theatre in Edinburgh, wrote a contemporary version of a 2500-year-old play which speaks directly to us about refugees, refuges and democracy. It also demonstrates Greig’s ambition to create a theatre that is a “democratic space” where people can “gather and encounter each other”.

Aeschylus’s ancient verse drama is a simple story of a group of women who have fled Egypt because they were about to be married off by force. Crossing the Mediterranean Sea, they land in their ancestral homelands of Argos, where they request sanctuary. King Pelasgos, the leader of Argos, is at first reluctant to grant them asylum. If he does, the Egyptians might declare war. So he decides to give his people a vote on the subject: a referendum on whether to allow the women to stay. (The play includes one of the earliest uses of the word democracy.)

Being a Greek tragedy, the world of the play is mythological as well as mundane. The women see themselves as the descendants of Io, a handmaiden at the temple of Argos, where the play takes place. Years before, she attracted the attention of the randy Zeus, king of the gods, but Hera, his wife, transformed Io into a cow and used a gadfly to drive her out of town. When she settled on the banks of the Nile, she gave birth to the generations of women who eventually decide to return to Argos, their homeland. In their refusal to submit to forced marriage, the suppliant women take a stand against the sexual violence of men, and assert their right to self-determination.

Aeschylus’s play foregrounds a large chorus of young women, and Ramin Gray’s fabulous production for ATC uses some 30 young women who are selected from the local community where the touring production visits. At the Young Vic, they come from the London boroughs of Southwark and Lambeth, and have been rehearsing since September. The result is a piece of choral community theatre that feels fresh and exciting. Each performance begins with a recreation of the ancient Athenean libation ceremony, in which a local dignitary pays respect to those who have made it possible. On the night I saw the show, Harriet Harman, a local MP and campaigner for women’s rights, poured out a bottle of red wine along the front of designer Lizzie Clachan’s open breeze-block stage.

At the start of the show, a line of women slowly arrive on stage, forming a phalanx of need, holding sticks of white rags in their left hands. This is a signal that they are seeking asylum, and their choral chanting and ritualistic movements evoke a kind of total theatre that stems as much from Artaud as from Aeschylus. The stamping, the swaying and the dancing create a stage world that seems both strangely other, and immediately familiar. When they intone, sing or chant Greig’s insistently rhythmic and poetic text you feel that you are witnessing mysterious incantation as well as group storytelling. Vocal leader Mary King and choreographer Sasha Milavic Davies create a visceral and vibrant experience. Music by John Browne uses drums and the twin-pipe aulos, an ancient wind instrument which drones and sighs with a Middle Eastern accent.

Although it is the whole chorus of women that imprints its music and movement on your memory, mention must be made of their warmhearted leader, Gemma May, as well as Omar Ebrahim as Danaos, their fatherly captain, and Oscar Batterham as the youthful King Pelasgos. The joy of the play’s opening mutates into scenes that tingle themselves onto your retinas and eardrums: the women use ash to draw the shape of their ancestral mother, Io; then of her calf; in the darkness they hold up lights as the Egyptians arrive to take them back; the citizens of Argos arrive to help them, and debate their fate. Moments of rhythmic clapping alternate with wails of regret and echoes of remembrance. The final image, of raised fists, radiates female power.

It would be heartless to dislike this show, but there are some aspects that won’t appeal to everyone. Despite its feminist flavour, The Suppliant Women is an ancient play from a time of traditional gender relations. The women express strong sentiments, but they do depend on men, on Danaos and on Pelasgos. Their vow of virginity is understandable, but hardly recommends itself to young women today. And their refusal to assimilate to Argos society raises troubling issues about contemporary migration. Although this is a proto-feminist and proto-political play, its messages are, to put it mildly, mixed.

If this production is both powerful and pertinent, and has heart as well as head, it also has the familiar taste of what middle-class audiences expect from total theatre: the music, movement and vocals are all overtly theatrical. In an evening that is sadly lacking in laughter this stage style invites parody and a touch of ridicule. It’s all too clean, and neat, and tidy. All too self-consciously theatrical with a big T. At the same time, The Suppliant Women offers strong reasons to open your arms to strangers in need, and to resist the abuse of women by unruly men. And that must be a good thing.