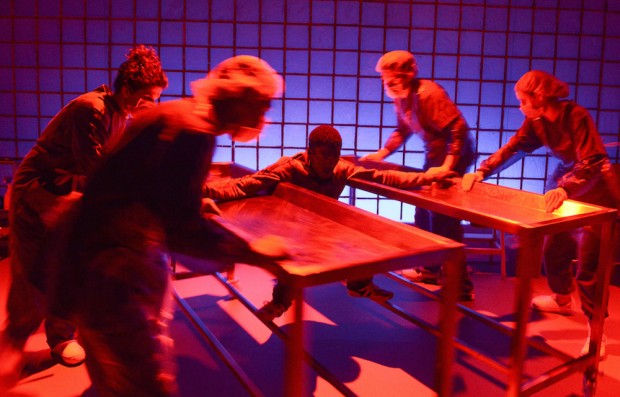 Regular air travel is a hassle. All that queuing, all that security, all those hot halls, and then the endless waiting, the bawling kids and the limited legroom. Basically air travel sucks. But at least it’s reasonably safe. The same cannot be said for irregular air travel: stowaways who slip into the wheel wells of planes. Some 96 people have tried this way of avoiding border checks — and most have died. This new play by the upcoming Fiona Doyle, who won the playwriting Papatango Prize in 2014, was inspired by one such case, that of Jose Matada, who died in 2012. Her play was shortlisted for the Susan Blackburn Prize and is now directed by Edward Hall, the artistic director of the Hampstead Theatre.

In The Strange Death of John Doe, Ximo, a young Mozambican man, falls to his death from an airplane while trying to make the perilous journey from Africa to Europe. Because he has no ID on him, he is classified as a John Doe by Ger, the Consultant Forensic Pathologist whose job it is to work out if he died in the air of oxygen starvation and hypothermia or on impact with the ground. On the other side of London, John Kavura, a detective investigating the body’s identity, is taken off the case because of his drink problem, and decides to go freelance. He persuades Anna, an inexperienced trainee pathologist, to hand over the SIM card that she has found stitched into Ximo’s clothing.

As the story of Ximo unfolds in a series of flashbacks, we travel from a London mortuary and police station to Cape Town, where the young man worked as a gardener for Rae, who is half South African and half German, and married to a nasty and abusive husband. The mutual attraction of female employer and male worker rapidly leads to an incident which forces both to flee the country — and the play expands into an epic account of restless humanity, tender affection and its tragic consequences. Along the way, we meet a Detective Chief Inspector of the Met, a white South African big shot, a corrupt Mozambican police official, an Angolan security man, a Nigerian sage and Felipe, Ximo’s brother. As well as a talkative Canadian traveler and a judicious coroner.

At its best, Doyle’s text is an ambitious, theatrically exciting and fast-moving panorama which conveys something of the breath-taking scope of contemporary migration, as well as details of its horrors. At its heart this is a play about humanity in all its truthful feelings, with flashes of perception about racism, injustice, violence, masculinity, memory and the irrepressible desire to follow one’s dreams. With its imaginative insights, and the occasional vivid image (butterflies, birds), the text brings the dead back to life so that they communicate again with the living. Dead souls. It also has some wonderfully eccentric passages, such as Felipe’s suggestion that the brothers should offer tourists guided tours to Maputo slums. Never sentimental, always grounded in emotional truth, it is nevertheless a broad-brush experience: we rarely linger for long enough to delve deep into any one character.

Hall’s rather busy production has turned his theatre’s Downstairs studio space into a mortuary, realistically designed by Michael Pavelka to be full of gurneys and smelling of disinfectant, and echoing with clinical pain. As we enter the space, the cast put dollops of antiseptic gel on our hands. The powerful autopsy scenes (lots of blood and guts) are played with a mixture of realism and symbolism (at one point a crunched plastic water bottle represents a sawn-through bone) which is sometimes excruciating, and those of a nervous disposition should brace themselves for some physically gross detail. With movement developed by choreographer Scott Ambler (before his death at the age of 57 in March), most of the large cast play several roles and are a constant on-stage presence, bearing silent witness, breaking into dance or simply filling the space with their suited-up presence. Several humorous sequences, such as one involving a buzzing fly, lighten the rather sombre atmosphere. Death is in the air.

One positive point is the uniformly good acting. Benjamin Cawley’s excellent Ximo is convincingly affectionate, baffled, desperate and pained. Likewise, Rhashan Stone conveys Kavura’s disatisfactions and his dogged desire to know the truth of the mysterious body that has landed in his in-tray. Callie Cooke switches well between the roles of Anna and Rae, while Charlotte Bradley lends pathologist Ger a grim professional humour. They are ably supported by Damola Adelaja, Maynard Eziashi, Nick Hendrix and Abigail Thaw (as the police chief).

Hall’s respect for Doyle’s vision is both the strength of this staging (he brings out the sweep and humanity of the story) and at the same time its weakness (some of her storytelling is a bit pedestrian and some of the writing is unnecessarily explicit — I mean, do we really need to have the corruption of the Mozambican police explained to us?). Similarly, although it feels right to have the dead communing with the living, there is surely a limit on how often you can have a character gasp in wonder or start with fright at seeing a hallucination. Too many ghosts spoil the haunting. And I do wonder if the opening sequence of Ximo’s death is really the best place to start his story. Such defects apart, this is a fine drama by a young writer who will go far.