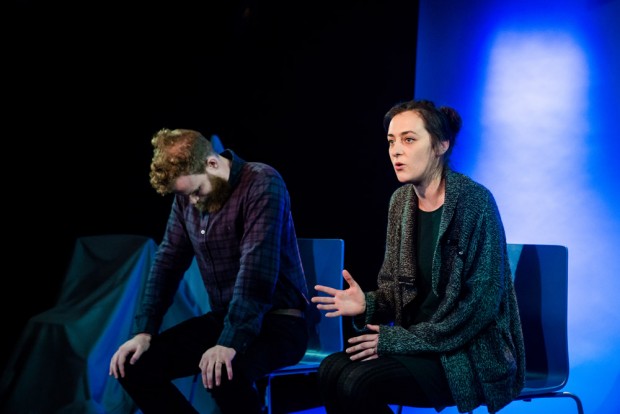 One of the quiet joys of contemporary British theatre is the small play. You know the kind of thing: a boy-meets-girl story, told with sharp dialogue and quirky humour. Usually with a cast of two, this type of play is fast-moving, full of small incidents, but with larger themes thrown up like shadows on the wall behind the action. Staged in small studio theatres, they are usually short adventures in new writing, with a bittersweet twist. At first, it looks like Andrew Muir’s The Session fits this bill like a woolly sock on a cold foot.

After an unnecessarily coy start, which plays with the idea that this couple is seeking help from a relationship therapist (hence the play’s title), the story starts like a rom-com, with the meeting of Bournemouth-born Robbie and Polish-born Lena in The Lively Elk pub during a soccer international in 2002. Lena has just arrived in the UK and doesn’t speak the language, while Robbie is working as a temporary barman. Needless to say, they are attracted to each other, and their first attempts at communication involve some sweet miming by him, and some sweet smiling by her.

Robbie and Lena rapidly fall in love; she learns English and gets pregnant; they marry; he fails to learn any Polish; their son grows up bi-lingual. Predictably enough, the strains start to show in their relationship, and then an accident happens that puts an intolerable strain on them both. At the start, the relationship between two young professionals — he becomes a teacher and aspiring novelist; she plays piano — from two different cultures is very promising, and Muir delivers some good lines. Talking of language, she says “In Polish I am not afraid to be alone”, while he says “The fact that my wife is foreign excites me.”

But not enough is made of potential linguistic misunderstandings, except for a joke about a three-barreled rifle, and the play soon swerves into a likewise underdeveloped study of the couple’s family life. Their son Freddy speaks Polish with his mother and English with his father, but Robbie becomes increasingly jealous of his son’s relationship with Lena, at one point descending into paranoid imaginings. Although much of this material is interesting, the 60-minute drama feels rather undercooked and definitely undernourishing. This couple seem to have no friends, their other family members are scarcely mentioned, and the big world outside their home is rarely explored.

Years fly by, but the play’s focus remains stubbornly small-scale, with the bigger issues of national identity and personal identity remaining on the periphery. The symbolism of the map in the bedroom feels a bit obscure, and the jagged and fragmentary style of some of the writing is similarly more frustrating than illuminating. While Robbie is a fair-enough portrait of a bit of a Little-Englander, I didn’t really feel that I got to know Lena very well. So although the climax of the story is quite emotionally strong, I was left wanting so much more. It was too small, when what I wanted was bigger.

Nevertheless, it’s hard to fault the acting in Debbie Hannan’s production, which on a bare stage with a bunch of everyday props is designed by Ruta Irbite (although I would have preferred some projections to illustrate aspects of the story more effectively). Izabella Urbanowicz’s Lena has a lean charm and conveys a sense of determination that suits her character perfectly, while Tom Shepherd’s Robbie exudes a convincing mixture of English bonhomie and confusion. But good acting can only take you so far, and despite a couple of moments when the sparks really fly, this is too small a small play, and its joy is too quiet.