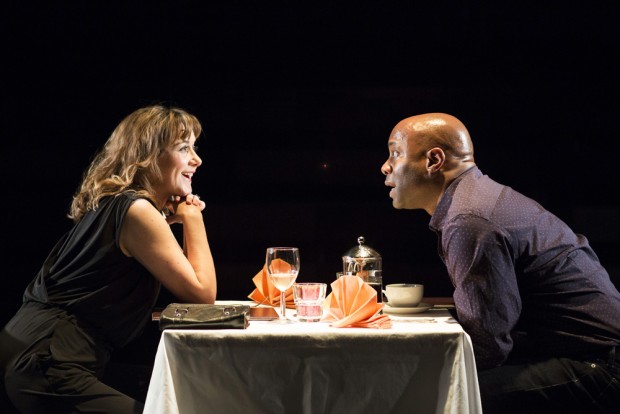 In the age of austerity, it’s getting harder and harder to avoid cliché. Especially well-meaning cliché. For example, all cuts to welfare are bad; we must defend government support of the needy at all costs. But clichéd ideas, however true, rarely make good drama so when I first heard about Oscar-winner Rebecca Lenkiewicz’s new play, whose theme is the cuts in the legal aid budget, I must confess that my spirits dropped. Was this going to be another case of theatrical journalism?

Things didn’t really improve when I read the programme note: in this, Andrew Caplen, President of the Law Society, attacks the Legal Aid, Sentencing and Punishment of Offenders Act of 2012 because it “severely curtailed” legal aid. This new law has condemned those who have few resources to great difficulties if they have a claim under clinical negligence cases, employment matters, family law cases, housing disputes, debt cases, immigration — well, the list goes on. It’s easy to agree that these are truly distressing cuts, but how do you dramatise them?

Lenkiewicz’s play, which is proudly sponsored by the Law Society, begins by introducing us to fortysomething Gail, a bright but harrassed lawyer who runs a small and underfunded firm whose cases are concerned with those most in need: the victims of abuse, those threatened with eviction and those who might lose their children. In a nice quirky touch, Gail is on a blind date with Ken, a separated man who is trying to get access to his kids. They have met via a dating site. So while Gail thinks she is having a night off, Ken is trying to get free legal advice.

Gradually, the play shows us Gail’s office life, with her sole colleague Laura, and one of her regular clients: the wonderfully eccentric Shaun, whose mother has died and who is about to lose his tenancy. At the same time, we watch Aisha, a young Pakistani woman whose new marriage to Riz slowly turns sour as he virtually imprisons her in his mother’s home, and then starts beating her. Shaun, Aisha and Ken are all invisible victims, whose personal problems have, suggests Lenkiewicz, been shunted into the background by changes to the law, which now makes redress and justice so much more difficult.

In the second half of the evening these invisibles take centre stage, and the power of their testimonies pushes the lives of Gail and Laura into the shadows. But while it is good to be reminded that not all is rosy in the Tory garden, The Invisible really is not a good play: it lacks drama, it lacks a compelling story, and it lacks focus. This is a play of vignettes, of often amusing scenes — especially the two blind-date episodes — with little coherence or debate.

At its worst, the lively writing becomes declamatory and declaratory. There are lots of well-meaning declarations, but little in the way of contested ideas. As a piece of political theatre, the news is even worse: there is a depressing ending that implies that we can do nothing to actually fight the system (offering instead a compensatory fantasy with the image of an indomitable bag lady). Very little indicates a way forward or a chance for change. The main relief from this pessimism is Lenkiewicz’s quirky humour, and there are lovely individual passages about diverse subjects, such as the travails of using public transport, the thrill of being Spiderman or the attraction of television’s Dr Kildare. Some of these moments are set to music, which while theatrical seem awkward here.

Michael Oakley’s efficient production is designed by Ruth Sutcliffe and has solid performances by Alexandra Gilbreath (a luminously sincere Gail) and Nicholas Bailey (an uncontrollable Ken), supported by Sirine Saba (Laura/Aisha) and Scott Karim (Riz and Laura’s boyfriend), with lovely cameos by an attractively hilarious Niall Buggy (Shaun and another of Gail’s dates). But despite the fun of individual episodes, the evening is characterised by a thinness of relationships, an absence of drama and a lack of ideas. Worst of all is the fact that none of the terrible cases presented here would be solved by getting more legal aid. Neither Shaun’s mourning for his dead mum nor the fraught marriages of Ken and Aisha would have benefited from more lawyers — surely their pain is more existential than that. And this is the visible hole at the centre of The Invisible.