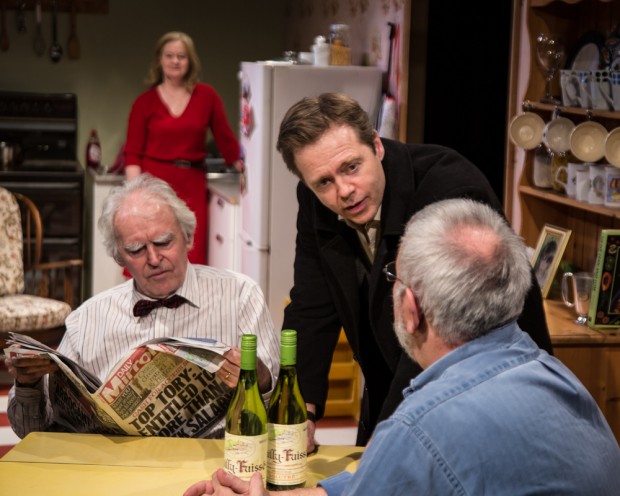 Some theatre genres, such as the family reunion play, are essentially conservative. Yet sometimes they can spring some great surprises. Currently, for example, the National Theatre is staging Sam Holcroft’s excellent Rules for Living, which is a Christmas family reunion play, with added theatrical devices. The result is a story that feels as if it’s liberated, at least partially, from its genre constraints. But some plays seem to get bogged down in their own craftsmanship.

The Heart of Things is also a family reunion play, this time by Giles Cole, and it lies fairly and squarely within the great British tradition of plays which show the clash between a regional backwater, in this case Norfolk, and the nation’s metropolis. At one point, there’s even a joke about how people speak in this rural area. One character, who lives locally, says, “All goes on down London, don’ it?” To which the metropolitan replies, mockingly, “Oh yes, Bob. It do.”

Those last words come from Peter, a mid-40s sexually confused teacher, who moved to London from his Norfolk seaside home many years ago. Now back to grudgingly celebrate the birthday of his father, Brian, a curmudgeonly 75-year-old who is in a wheelchair since the car crash that killed his wife some 20 years previously. Living with Brian is his fortysomething daughter Ros, who has had a son — now grown up — with local man Bob, a harmless kind of chap with a slow-burning passion for building balsawood model boats. The couple never married and are now separated.

After a first scene that outlines these relationships, and locates the tension between Brian and Peter in the fact that the younger man is gay, the rest of the play is set in May 2010. Initially, this is very promising. The inconclusive general election of that year, and its resulting Coalition government, could be a good metaphor for shifting family alliances. The problem is that Cole never really develops this insight, so these scenes could actually be set at almost any time in the past decade.

As Peter returns home on this second visit, he has a surprise up his sleeve. He is bringing a guest, Jacqui, who is not only a woman, but black too. While his family take the race issue in their stride, they are bewildered by the fact that their gay son is coming out as straight. And they are not too pleased by Jacqui’s politics: she’s “a Maggie Thatcher in the making.” The best scene of the play is when Peter and Jacqui discuss his sexuality: it’s fraught; it’s awkward; but it’s emotionally truthful. He is very confused. But, like most of us, he craves love. But what is love? Is it care and protection or sexual desire? And how does sexual identity impact on personal identity? Peter’s clichéd statement that “family is what matters” is put neatly through the wringer.

Despite Cole’s skill at the formal craft of playwriting, much of this story is poorly imagined, being old-fashioned, melodramatic and more than a bit implausible. Not enough is made of the fact that, for Peter, London has always been “the heart of things”, and too much is made of his reactionary attitudes to the school kids he teaches. Between Peter and Ros, brother and sister, there is secret that lies deeply buried in the past and its emergence into the open provides the climax of the evening. Both are fairly good portraits of lonely adults who share mixed feelings about their authoritarian and opinionated father. And Cole succeeds in making Peter a convincing study in personal and professional failure. He is not only a failed teacher, but a failed writer to boot.

Director Knight Mantell’s production suffers from some poor casting: while Nick Waring is good as Peter, Patience Tomlinson is too old to be his sister (a fact that clearly puzzles the audience). Ralph Watson plays curmudgeonly Brian, while Amy Rockson is solid as Jacqui. But the play is curiously dated, and says nothing about contemporary sexual politics or, despite the date of its setting, about the upcoming general election. Sadly, it fails to overcome the limitations of its genre.