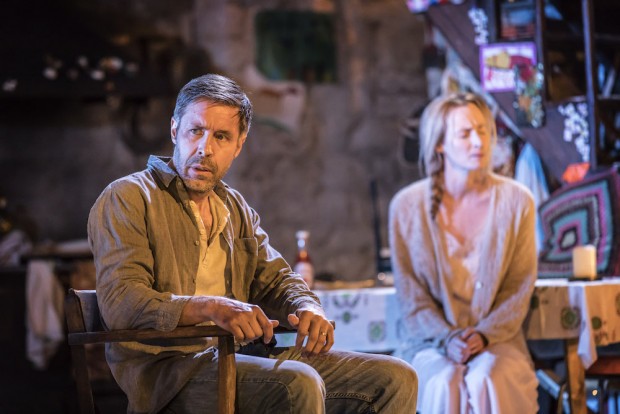 I hate the kind of hype that sells out a new play within minutes of tickets becoming available. The kind of super hype that feels dictatorial, as if it is daring the audience to disagree. I mean, isn’t there something hideously lemming-like about this type of stampede for tickets? It almost makes me want to hate the show — before a word has been spoken on stage. On the other hand, there is also something delicious about the prospect of another Jez Butterworth play. After his triumphs with Jerusalem in 2009, and The River in 2012, it’s fascinating to see what he does next. And, as a plus, this new one stars Paddy Considine. And it’s directed by Sam Mendes, whose film cv includes two Bond movies (Skyfall and Spectre). And, as a move that already worships its sure-fire success, it transfers to the West End next month.

Set in rural County Armagh, Northern Ireland, in August 1981, the play takes place in the Carney home. This is a farming family, who grow cereals for export, and the head of the household is Quinn Carney (Considine), a former IRA man. He is married to Mary, a hypochondriac who spends most of her days in bed. The couple’s seven children range in age from 16 to nine months. The older generation is Uncle Patrick, a studious drunk, Aunt Patricia, a fierce Republican, and Aunt Maggie, whose nickname “Faraway” suggests her demented stupor, from which she occasionally surfaces to make clairvoyant utterances. The other members of this crowded house include Caitlin, the wife of Quinn’s long-absent brother Seamus, and her 14-year-old son Oisin, as well as Tom Kettle, an English orphan brought up by the Carneys.

The action of the play begins when Seamus’s body is found. Instead of being simply missing, presumed living in England, he was actually executed by the IRA some 10 years previously. When Father Horrigan, the local priest, arrives to inform Quinn and Caitlin of this discovery, he finds the Carneys in the middle of the annual harvest, hours of hard work followed by hours of eating, drinking, singing and dancing. Yes, this is a one-family harvest fayre: and as the Carneys are joined by their nephews, the teenage Corcorans, the stage is soon bulging with people and with talk and with action.

In The Ferryman, Butterworth’s triumph is that he has managed to shrug off the static quality of all of his previous plays, and has poured a whopping dose of stage action into the mix. This is a breathtakingly ample hot ticket, a story that heaves with characters, with narratives and with incidents, with jokes and with surreal moments. There are poems and songs, and a festive atmosphere that gradually sours into teenage rivalries and a dangerous confrontation. Perhaps predictably, bookish Uncle Patrick introduces Virgil’s Aeneid, with its image of Charon the ferryman, and explains who is and who isn’t allowed to cross the River Styx.

Exciting moments include The Undertones’ classic “Teenage Kicks” blasting away the nostalgic tones of traditional tunes, the arrival of a remarkably placid baby, a pecking goose and a ruffled rabbit, Aunt Patricia’s stern Republican dictats, Tom Kettle’s larger-than-life eccentric characterization, a generous family meal, a rebel song, Aunt Maggie’s visions of the future and her intuition that banshees are gathering, and even a poem from Sir Walter Raleigh. There’s a lovely baggy, outlandish quality to the writing. In the background are the great IRA hunger strikes of 1981 and Margaret Thatcher’s intransigence. This fuels the grim determination of the older IRA members, and the ideological fury of the teens.

As the story lurches towards its tragic ending, sprawling a bit over its more than three hours of running time, you have plenty of opportunity to pick holes in the fabric of this magnificent edifice. You might wonder about why Butterworth spends so much time first talking up, and then subverting, the image of the stereotypical Irish countryside drama, setting his play in a large kitchen and constantly whipping the carpet from beneath any clichés that arrive for tea. You might consider whether the world of the play is meretricious, like Martin McDonagh’s Hangmen, pandering to all our worst ideas about terrorists, glorifying violence and quaint rural communities. At its worst, it’s as false as feck. Although the portrait of Quinn, Mary and Caitlin is deeply sympathetic, as are the pictures of the youngest children, who are full of laughter, there’s a cruel streak in the play and its ending offers a counsel of despair. Its politics are nihilistic, and women play second fiddle to the men.

Typically, Butterworth plays up the community element of rural life: here the Carney family is attractively eccentric, lovable even, and — despite modernity — they maintain a link with past rituals and past political beliefs. A mild glow of nostalgia hangs over their life, although at the centre of things there is a canker, a juicy worm in the bud. The triangle of Quinn, Mary and Caitlin introduces an emotional darkness into this appealing world, with guilt, almost a parody of Catholic guilt, gnawing away at the main characters. And, as with so many of Butterworth’s plays, the man of the moment turns out to be self-destructive, his masculinity in crisis and his reaction to adversity suicidal. The message of the play is, in the end, hardly life affirming.

As you’d expect, Mendes orchestrates this domestic epic, on Rob Howell’s set, with enormous clarity and control. He splashes about in the joyous moments and then chills us with apprehension and with foreboding. Considine has a pent-up energy, like a bomb ready to go off, that explodes in a well-focused fury, and he positively smoulders with desire and guilt. He is well matched by Laura Donnelly and Genevieve O’Reilly as Caitlin and Mary. Of the rest of enormous cast, which fills the stage during the great set pieces, I particularly enjoyed the performances of Dearbhla Molloy’s Aunt Patricia, Des McAleer’s Uncle Patrick, John Hodgkinson’s Tom Kettle and Tom Glynn-Carney’s ferocious young Corcoran. With acting like this, it’s really an amazing experience, if a rather heartless one. But Butterworth’s storytelling finesse carries all before it.