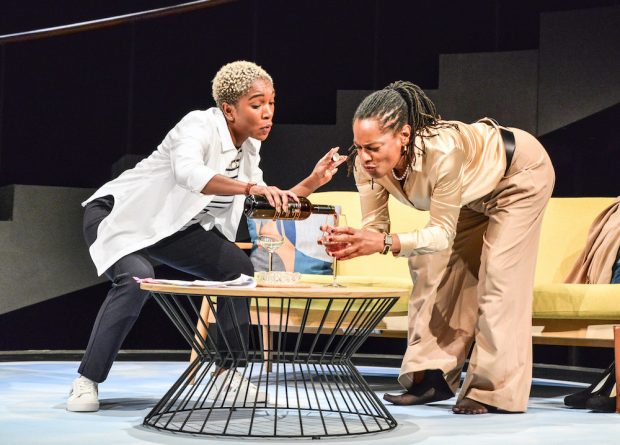 I live in Brixton, south London. A few days ago, the borough’s aptly named Windrush Square hosted events which celebrated the contribution of the Windrush Generation and their descendants. With Windrush Day being 22 June, last week was originally going to be the opening night of Roy Williams’s new Hampstead Theatre play, The Fellowship, until plans had to be changed because Lucy Vandi, who was to play the main character, fell sick and performances were postponed. Cherrelle Skeete bravely takes on this major role and her dynamic stage presence, partly with script in hand on press night, is one of the evening’s highlights.

Dawn (Skeete) and Marcia are the fiftysomething daughters of Sylvia, who arrived from Jamaica decades ago, but is now bedridden. She lives with Dawn, who looks after her, and has other problems. She lost one son to racist violence and is worried about what might happen to her other boy, Jermaine, a teenager at college. Her partner Tony plays sax in a two-tone tribute band, but is often away. By contrast, Marcia is a successful lawyer who is currently having an affair with a white MP, Giles, who has a drink problem. Likewise, Jermaine is hooking up with Simone, a white teen who is also at college. It soon becomes apparent that their friendship has a grim history, while Marcia’s lover Giles is about to involve her in an unpleasant ethical dilemma.

The relationship between Dawn and Marcia, who were activists in the 1980s (a time of riots, marches and Rock Against Racism) but have now settled down, is vividly portrayed. At first, it seems like they are opposites: Marcia has listened to the advice of the parental Windrush Generation to work twice as hard as her white colleagues, and in one of her best speeches she passes on this advice to a young black policewoman. By contrast, Dawn is vigorously sceptical of the whole white establishment, conscious of how their mother was almost deported in the mid-2010s, and militantly mouthy about white privilege. One of the good things about the play is that Williams shows how these characteristics are not only more fluid than we might initially think, but also inflected by class.

The menfolk add a complication. Masculinity. Tony is even more antagonistic to white society than Dawn, but he is also a freedom-loving bloke, which means that he enjoys touring with his band and has an eye for other women. He also likes his spliff. Although his macho bravado gets firm putdowns from Dawn, he is a passionate individual with a good strong line in common sense. Although not his biological son, Jermaine has mixed feelings about this father figure, and certainly does not share the anti-white sentiments of his family elders. In a rather overlong play, which fills two hours and 45 minutes, Williams includes a scene in which Dawn and Marcia’s mother, Sylvia, gives us a glimpse of her experience.

The playwright evokes the sibling connections between Dawn and Marcia with great insight and some energetic language which makes their arguments initially thrilling to hear. The opening scene, as well as the first dance sequence, are both exciting and joyful. However, the plotting is predictable, and by the second half the arguments soon begin to feel repetitive: dialogues just go round and round. It feels to me as if Williams has lost control of the material, and that no one has been brave enough to suggest an edit of his work. The result is that a great idea for a play, structured by means of successive duologues, is buried in a frustratingly verbose and baggy script, which has some great clashes of attitude, but very little dramatic development.

Paulette Randall’s sympathetic production, on designer Libby Watson’s oddly posh and coldly symbolic set, brings out some of the story’s most angry and more tender moments, but fails to create a coherent experience. The first joke about Alexa is funny, the repeats not so much; in fact, the repetitive nature of some of the writing is cumulatively exasperating. The cast, led by Skeete, who gives Dawn some convincing maternal anxiety as well as fiery opinions, is better in the quieter passages than in the shouting matches. Suzette Llewellyn (Marcia) and Trevor Laird (Tony) are good, especially in the more humorous moments, while Ethan Hazzard, making his stage debut, and Rosie Day as Jermaine and Simone make the most of the rather underwritten subplot. This is a heartfelt epic play, but its second half badly needs a rewrite.