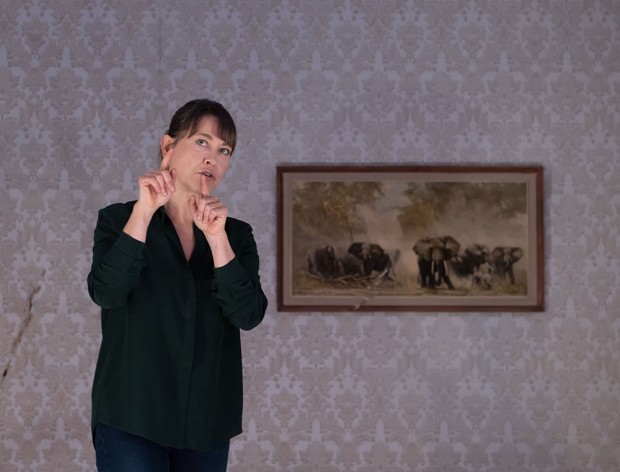 Playwright Mark Ravenhill, who shot to fame in 1996 with his in-yer-face shocker Shopping and Fucking, has been more or less absent from our stages for about a decade. The last play of his that I saw at the Royal Court was the Cold-War fantasy Over There — that was back in 2009. So his current show, called with brutal directness The Cane and about a teacher who used to administer corporal punishment, is something of a comeback. And it’s got a cast that’s hard to beat (sorry): Alun Armstrong, Maggie Steed and Nicola Walker. They are directed by Vicky Featherstone, artistic director of the venue and a staunch believer in theatre’s political mission.

For this is a play with a message: although caning was abolished in schools in 1986, Ravenhill draws on his own memories of kids being beaten — he says that he managed to escape the birch — to argue that this practice was, and is, an example of child abuse. Beating children is wrong. But is it that simple? His finely, and maturely, written three-hander adds some complications. Set in the rather nondescript living room of grey-haired teacher Edward (Armstrong) and his wife Maureen (Steed), the play shows how his expectation of being able to celebrate his retirement after 45 years at the chalk-face in the same school is challenged by a group of angry students, who are demonstrating outside his house in ever increasing numbers.

For some six days, Edward and Maureen, who was once also a teacher, have been besieged by this demo, unable to safely leave the house. Slogans have been shouted; a window has been broken by a brick. Edward, it emerges, is the deputy head of the local comprehensive. In this role, he was in the distant past responsible for chastising children with a cane. As the school prepares to give him a glorious public send-off, a large number of the pupils have discovered the fact that he was once a beater of boys. Hence the protests, which have rapidly swelled to more than a hundred rowdy kids. And now, as the couple’s daughter Anna (Walker) arrives home, the ground is ready for a full-on family confrontation because she has her own political agenda.

Anna has been estranged from her parents for years, and currently works, like her father, in education. Her role is that of a highly paid consultant to academy schools and she is aware that her father’s comp has failed its Ofsted inspection. In the eyes of her parents, who have a loyalty to the principles of the welfare state, her support of academies is a case of treason — she is the enemy. As well as being a bad daughter. But when Edward reluctantly shows her a report that he is putting together which challenges Ofsted’s conclusions, Anna offers to help translate his passionate defence into the new language of school inspection, with its “pupil voice” and “transparency”. Early on, however, this seems like a quixotic project. More alarmingly, Edward has kept damning evidence of his role as chastiser in chief at home. And Anna sure is going to use this against him.

Ravenhill’s play is sharply penned, and beautifully constructed. It is compelling in its plotting and its picture of power relations in the family and school is hearteningly even-handed. As we get to know him, Edward is more and more creepy, a tinpot sadist who bullies kids and browbeats his wife. But he is also shown as having a strong sense of duty, to his family and to his colleagues and place of work. He accepted the post of deputy head because he wanted to provide for his nearest and dearest. Like the archetypal concentration camp guard, Edward is a study in the banality of evil, a very human-sized tyrant, a man with a blemished past. But the toxic qualities of his masculinity are becoming more and more evident to the women in his life.

Maureen is at first loyal to her husband, and she sees their daughter as a traitor. But, very gradually, she understands that Anna has a number of very good points, and that Edward has some secrets that even she wasn’t aware of. For a start, he hoards things in the attic, and who knows what stuff he has kept from his murky past? When she reveals an innocent act of support, he misinterprets it in a paranoid and angry way. By contrast, Anna starts off as a calculating antagonist, full of hateful memories of her own childhood, and her offer to help her father comes with some barbs. This is a play in which the women challenge male power — and the balance between the sexes tilts this way and that in a thrilling see-saw.

As the family conflict ebbs and flows, Ravenhill’s characters take the time to meditate on the symbolism of the cane, describing how one of these implements used to hang in Edward’s office, a visible threat to the disobedient and a totem of order. Also, of course, a phallic symbol. The sadism and humiliation of corporal punishment is contrasted with the skill needed to apply the rod to naked hands without breaking the skin, leaving a temporary welt but no permanent injury. It sounds arcane (sorry again), but it has a perverse fascination. And, as the playwright makes clear, Anna has her own ideas and language of control. Each generation finds new ways of dominating school kids.

Featherstone directs this clear-sighted yet complex political play with precision and sharp-elbowed effect. The Cane begins as a Pinteresque study of domestic banalities, but soon morphs into a masterly and fascinating account of power, masculine control and female resistance. Despite Chloe Lamford’s rather ugly if suitably claustrophobic set, perhaps the least beautiful aspect of an otherwise exciting production, this intellectually satisfying and emotionally powerful show features some excellent acting. Armstrong dominates as a man teetering on the verge of volcanic rage, while Steed is the long-married wife whose eyes snap open and who eventually finds her own voice. Walker remains cool, calm and relentlessly controlled, a cold angel of vengeance. Great writing, great production, great stuff.