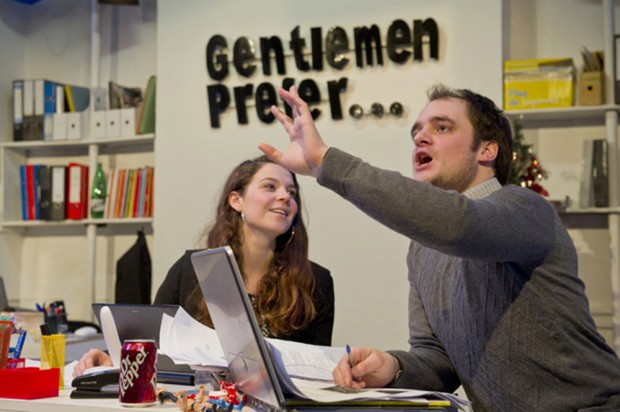 The world of the media offers plenty of opportunities for satire, but the idea of a comedy about sub-editors at first glance seems odd. After all, the sub-editors, or subs, are hardly journalism’s most glamorous beings: these office-bound nerds spend their working days correcting the spellings of other journalists and cutting their copy, while penning pun-heavy headlines and writing captions to pictures. Yet, as RJ Purdey’s play — which was a sellout hit at this venue last year and now returns for another run — makes clear, there is some comic juice to be squeezed out of the dreams and tribulations of these worker ants.

We begin the day in the cramped offices of Gentlemen Prefer… magazine, a lad’s mag with upmarket pretentions. The sub-editing team of Derek (chief), Finch (deputy) and James (junior) are busy dotting the “i”s and crossing the “t”s of articles submitted by their more glamorous contributors. At the same time, they dream of becoming writers themselves, or editors, or anything other than what they actually are. When a young woman, the freelancer Anna, arrives to work at the office, their cosy little environment of testosterone-fuelled banter is seriously challenged.

Much of the action centres on Finch. He is a very attractive character — if you like life’s losers, that is. He’s also an arrogant Welsh know-all, a bigmouth with all the tact of a bull in a porcelain exhibition. With no girlfriend, no taste and no prospects, he’s a wanker in almost every sense. Unsurprisingly, his ambition to be a novelist is clearly doomed, although we are mercifully spared any evidence of his creative side. As he falls for Anna, we just know that her ambition will triumph over his love.

Although Finch is a pain, and in pain, his boss Derek is in scarcely better shape. Married with two kids and a wife always on the phone, he aspires to better himself, going for the job of the magazine’s deputy editor, but we just know that he’s never going to make it. Of the junior staff, James is young and efficient while Anna is young and attractive — yet both parts are underwritten.

Talking of writing, Purdey writes the male banter of his characters as if he, and they, are still stuck in a 1990s crisis-of-masculinity play. It’s all so 1995. As this men’s mag tries to relaunch itself, and become more touchy-feely, more family-friendly, the old-style formula of nudes and innuendo gets a thorough going-over. But although Purdey’s lame attempt at geezer chic is sprinkled with cheerful vulgarity, most of the dialogue is not so much pedestrian as dead on its feet, with only the odd glimmer of wit amid the verbal dross. So although Purdey has a nicely sceptical attitude to current platitudes about the digital age — his characters bemoan the fact that most bloggers don’t care about spelling — the play’s ideas about journalism and celebrity are underdeveloped and uninspiring. Nor has it anything contemporary or new to say about sexism, office politics or individual loneliness. Its view of work is conventional; its jokes predictable.

As directed by Hamish MacDougall, Subs is dominated by Michael Cusick’s noisy and gesticulating Finch, whose loud exclamations and passionate diatribes are the meat of the show. By contrast, Steve Hay’s performance as Derek is a bit too quiet and too laid-back. He lacks the authority needed for the role, but, to be fair, he does grow as the evening progresses. Naomi Waring’s Anna is convincing enough and Max Krupski’s James is calmly effective. Disappointingly, however, Purdey’s script is several proofs short of the genuine article.