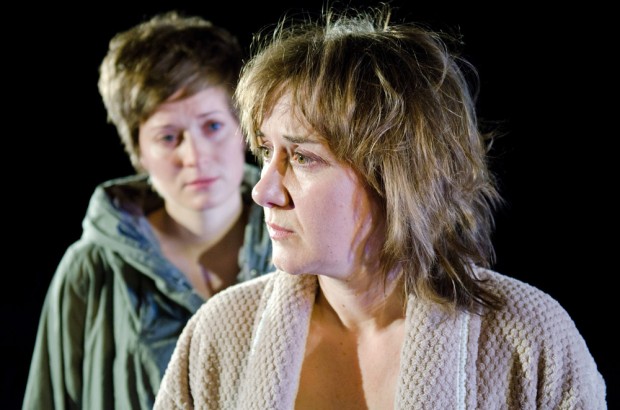 Write what you know, the cliché goes, and in his new drama the playwright Chris Lee draws on his day job as a social worker to create a tense two-hander about a middle-class social worker and her client, a working-class single mother who kills her baby. Inspired by the notorious case of Baby P, the piece adopts an intriguing form in order to examine the realities behind the tabloid headlines about evil mums and monstrous sinners.

Moira, the social worker, visits Dawn, the single mother, and discovers to her horror that she has abused her baby. As a consequence of the case, Dawn is imprisoned and Moira loses her job. Years later, after being released, Dawn seeks out Moira to ask for help. The older woman’s response is blunt: “You ruined my life.”

Lee tells this story in reverse order, starting with Dawn’s release, then moving onto a scene in which Moira visits her in jail, before concluding with the meeting during which the social worker discovers the dead baby. With two additional monologues which enable us to see the fresh aspirations of a youthful Moira as well as the better side of troubled Dawn, this structure turns up the tension as the story moves relentlessly to its horrific conclusion.

At its strongest, this is a depressing but compassionate study of different kinds of guilt. Dawn is a perceptive and manipulative individual who perfectly understands and pinpoints Moira’s do-gooder attitudes with a mixture of irony and contempt. Yet her mouthy aggression also clearly masks a scared, vulnerable and damaged young woman. Unlike the case of Baby P, there’s no sense here that Moira has acted unprofessionally, but she still feels responsible for the tragedy.

I have mixed feelings about Shallow Slumber: it’s certainly a powerful piece of writing, only occasionally marred by a bit too much self-awareness on Dawn’s part and a bit too much parody of social work in Moira’s lines. But Lee’s refusal to provide an explanation for Dawn’s horrible actions, while understandable, feels dramatically unsatisfying, a bit of a cop out. Here the social worker has tripped up the playwright. Yet the show remains strong, troubling and tense.

What carries the evening is the acting in Mary Nighy’s compelling and taut production, which is staged in the Soho Theatre’s claustrophobic upstairs studio space. Alexandra Gilbreath’s Moira has an idealistic intensity and certainty which contrasts well with her more bitter and older self, while Amy Cudden’s Dawn offers a mix of punky forcefulness and frightening self-hatred, convincingly suggesting the rage beneath her outward front. These excellent performances not only articulate the class antagonism at the centre of the play, but together convey an unusual quality of mercy that runs through Lee’s writing. Of course, the final account of the child murder is heart-stoppingly awful, but the psychological interplay between social worker and client is well crafted. At the same time, I wish that Lee had left his social worker’s knowledge in the office and opted for a more dramatic explanation of the horror.