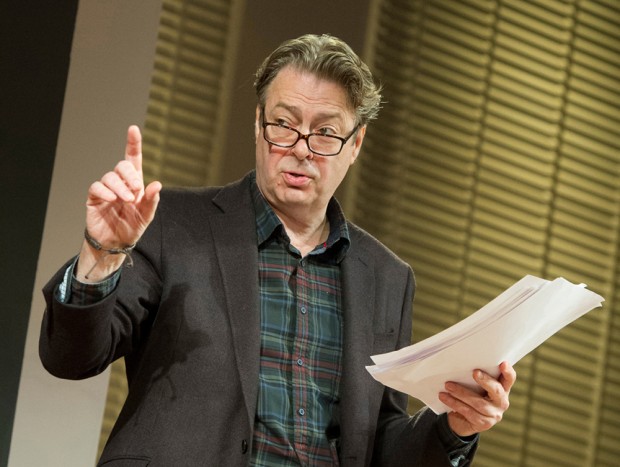 Writing is a tedious activity, usually requiring a great deal of time spent alone at a desk with a pen, typewriter or laptop. It gives you bad breath and piles. Since a literal representation of this would be death on any stage, plays about writers need a dash of spice. In Pulitzer-Prize nominee Theresa Rebeck’s 2011 comedy, Seminar, this comes from seeing a quartet of budding writers being humiliated by their teacher. Luckily, there’s no writing on show, but there is rather a lot of silent reading — which is second to writing as a soporific activity. But cheer up, the comedy is a vehicle for the ever-watchable Roger Allam.

The seminar involves four young hopefuls paying $5000 dollars each for sessions with Leonard, a washed-up novelist who visits Somalia in search of “the truth” (yes, really), and who works as a shit-hot editor as well. His students are Kate, a rich New Yorker in whose plush apartment (designed by Lez Brotherston) the seminars are held; Martin, a poor young man with a burning ambition; Douglas, the pretentious one who nevertheless has good contacts; and Izzy, a mini-skirted anti-feminist with talent for barbed remarks.

As each of the four presents a piece of fiction to the group, Leonard rips it apart with devastating accuracy. He exposes the aspirations and dreams of the youngsters to the scorching heat of experience. He’s a dreadful teacher, but a great stage character, a monster who fascinates as much as he repels. While this is happening, the love lives of the scribblers get hopelessly entangled, with predictable jealousies and a fair bit of bed hopping. Needless to say, Leonard is not immune to the sexual charms of his students.

There’s a real vitality in Rebeck’s writing, and the jokes elicit laughs either because of their satirical truth or because of the audience’s sheer discomfort. That said, the first part of the drama feels like a television sit-com, complete with wise-cracks and one-liners, rather than a story which has any real depth. By the time the interval came, I was thinking that only the sudden death of at least two of the characters could save this show. But I was wrong to be too dismissive.

In the second half, the plot cranks up a gear, with some more subtle writing, although I could have done with less of Rebeck’s more declamatory passages, and some more emotionally truthful moments stumble into view. Seminar is not entirely free of cliché, and at least two characters are rather underwritten, but there is enough sharpness and insight here to keep somnolence at bay. A lot of the jokes are belly laughs, although the questions of genius versus talent, and nature versus nurture, which the play raises, remain tantalizingly unresolved.

In the end, Rebeck seems to be arguing that writers are feral beasts who are born rather than made, and that the only function of writing classes is to weed out the less talented. Success, she suggests, is as much a function of networking as of talent, and the most necessary quality in a writer is sheer bloody-mindedness. In the programme, she says that the worst advice she ever got was to give up — so I suppose that provided the emotional fuel behind the play.

Terry Johnson directs with his usual competence and the cast delivers when it matters: of course, it’s Roger Allam’s Leonard who grabs all the attention, and I found myself wishing that he was less attractive, more provocative, a bigger shit. Smellier. Our very own Simon Gray might have given him more depth. Likewise, the youngsters are a bit too likable for my taste: Charity Wakefield’s shrill but intelligent Kate; Bryan Dick’s quietly sincere Martin; Oliver Hembrough’s pretentious Douglas and Rebecca Grant’s effortlessly sexy Izzy. They all contribute to making an enjoyable evening out of this rather small comedy.