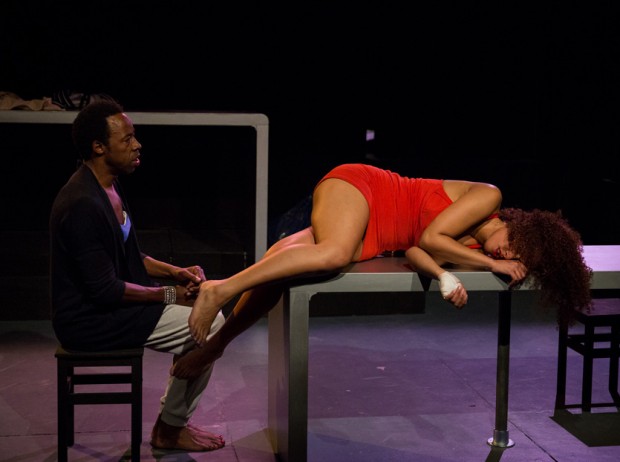 One of my most vivid theatre memories is the opening scene of Stella Feehily’s 2003 play Duck, which is set in Dublin and features two young women on the lash, wildly drunk and fabulously mouthy. More than a decade later, little has changed for youthful female friendship. In Kathryn O’Reilly’s debut play, Screwed, a pair of slightly older young women, Luce and Charlene, are first seen on the factory floor, working in their deadeningly repetitive job, screwing fittings into braided flexible metal hosing (yeah, it’s as boring as it sounds — although the word screw does raise a smile). Both women are characteristically mouthy so we’re off on a roller-coaster.

Luce and Charlene are in their early 30s, and their aim is to live it large, live in the moment, live for themselves, live. But their manic clubbing and binge-drinking lifestyle is called into question by the two most important men in their lives: Paulo, their half-Russian factory supervisor, who is Charlene’s on-and-off boyfriend, and Doris, a fiftysomething black tranny who is the mixed-race Luce’s dad, or rather mum (it’s complicated). The conflicts of the situation arise when Paulo announces his intention to move to Russia, and take Charlene with him, and when Doris says that she is so annoyed with her daughter’s lifestyle that she wants her to leave home.

As a picture of female friendship, Screwed has a lusty vitality that feels both hectically excitable and, so far as it goes, emotionally truthful. Luce and Charlene egg each on, watch each other’s back, and get on each other’s nerves. They have a feisty independence alright, but they just don’t really know what to do with it. Although they are best mates, their love can — in a drink-and-drug fuelled micro-second — turn into hate, and an enthusiastic roar can morph into jealous anger.

The openness of their sexuality and their lust for life contrasts with their loneliness and poor self-esteem. It’s almost a textbook case. All their verbal and physical bravado is obviously just a front — underneath, they are a pair of badly damaged, aching little girls who have no idea of how to heal themselves. When, at the end of yet another binge-massive night, they quarrel with Paulo, who also runs a kebab and hamburger van, the consequences are devastating to all involved.

But as well as offering a lurid snapshot of two contemporary working-class women, the play also suggests a sharp contrast between a couple of very different ways of life. At one point, Paulo asks Charlene what her life plan is, and she stares at him with incomprehension. He has an aim, a mission, a project; she has nothing. Her poverty is as much about a lack of aspiration as a shortage of cash. Luce, meanwhile, hopes to be promoted at work by offering sexual favours to her managers, a strategy that isn’t very reliable. Both help Doris with her webcam sex performances. Sadly, the play offers precious little future, or consolation, to these impoverished and troubled women.

With its punchy dialogue, and alcohol-inflected hilarity, Screwed has a vulgar vigour and an emotional energy that throbs like an inflamed sex organ. O’Reilly writes convincing dialogue and has added variety and pace to the storytelling by using monologues and choral passages. But if the piece has a naive joy of life, what it lacks is a compelling narrative, and by the end of 90 minutes the outcome is depressingly predictable. (And some bits are awkward: at one point Doris also tells Charlene a bit of backstory that she must surely already know.) So despite the shards of insight — from Paulo’s realisation that life is “too hard” in the UK to the violence and self-hatred of the two women — this is an unenlightening story.

On the other hand, Sarah Meadows’s production conveys the rawness and desperation of the characters, who work and binge on Catherine Morgan’s aptly abstract set, with its attractive silver metal and mirror ambiance, which contrasts nicely with the primary reds and blues of their glad-rags. Eloise Joseph’s spitfire Luce and Samantha Robinson’s more introvert Charlene dominate the stage space, while the men — Stephen Myott-Meadows (Paulo) and Derek Elroy (Doris) — provide islands of stillness in a tempest of sex and violence. But while this is an energetic slice of in-yer-face theatre, and a vivid illustration of self-destructiveness, the absence of a compelling plot feels like a bit of a comedown.