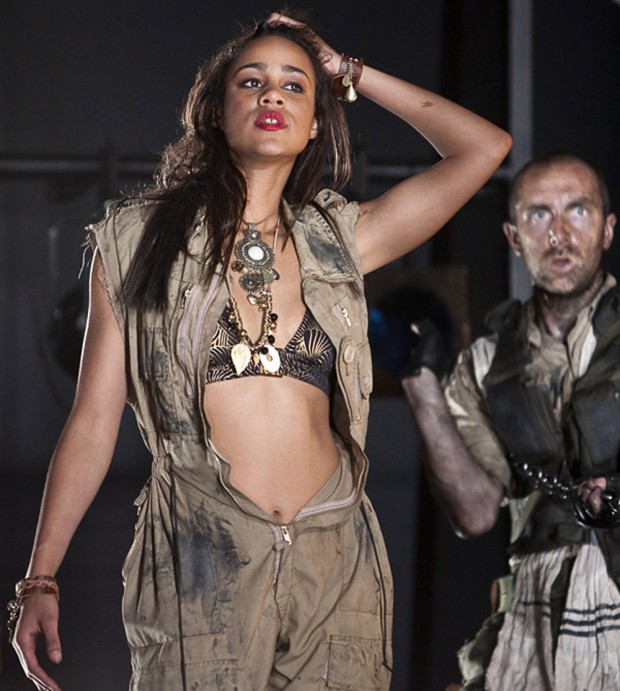 The last time I saw Oscar Wilde’s biblical tale it was performed by dancer Lindsay Kemp at the Roundhouse in London, back in the 1970s, in a production that was high on dope, incense, strange vocal drawling — and which transported you very quickly to hippie heaven. Choked by clouds of fragrant perfume, weird in its singsong language and thrilling in its strangeness, this seemed like an ideal way of realising the crazy vision of this odd piece. But theatre is not about being faithful to fond memories, it’s about the constant restaging of classic plays, so this new version of Wilde’s 1892 play offers a welcome chance to reassess it.

Originally written in French, Salome was translated by Wilde and his lover Lord Alfred Douglas, a process that soon degenerated into acrimonious arguments between the two. But however odd the resulting language, the plot is clear enough. Salome, the cock-teasing and wilful child of Herodias (who is now married to Herod, King of the Jews), becomes fascinated by Iokanaan (aka John the Baptist). Spurned by the holy man, she makes a deal with her frisky step-father: Okay, I’ll dance for you, perv that you are, if you give me the prophet’s head on a platter.

If this sounds vulgar then it catches perfectly the tone of Jamie Lloyd’s updated version, for Headlong theatre company, which comes at you shrouded in mist, with a thumping soundtrack and its pants right down at its ankles, and dragging in the dirt. Dressed by offcuts from the Israeli Defence Force and Mad Max, the ambience smells strongly of foul pitch, and the play is performed on a black and metallic set — brilliantly designed by Soutra Gilmour — that suggests a dystopic world hit by environmental disaster.

In Salome, Wilde’s language is not the expected witty and glittering society chat, but rather an elaborate symbolist creation, dripping with chiselled gems, soaked with carefully wrought verbal images, and all hung with heavy apocalyptic imaginings. For a playtext, it is often bogged down by its own literary self-consciousness, full of thees, thous and doths, evoking a lost world populated with Caldeans and Judeans. The King James Authorised Version of the Bible has a lot to answer for.

In this futuristic production, Salome is less a princess and more a chavette. Played with feisty raucousness by Zawe Ashton, she cannot mention desire without pitching up her rump or rubbing her thighs together. When she tempts Seun Shote’s forceful Iokanaan, she dips her hand into her knickers and holds it in front of his nose. Well, at least you can’t accuse her of being too discreet. But her “I will kiss thy mouth” is more petulant than sinister: all in all, a case of pimp my Bible.

Equally contemporary is Con O’Neill’s Herod, with his high-pitched squeals, wild gyrations and frantic crotch-grabbing (his own more often than anyone else’s). Fielding a repertoire that swings from rasping spits to campy huskiness, he is royalty as druggy party-goer. Unsurprisingly, his consort, Herodias (memorably pronounced as Herodi-arse), is a drunken lady slightly past her sell-by date, an old clubber who takes her wine from a jerry can.

Most of Lloyd’s energy has gone into creating striking visual set-pieces, and Salome’s climactic dance — a strip rather lacking in tease which is played in front of a ghetto-blaster and flashing lights — is undoubtedly well realised, as is her final scene with the head of Iokanaan, an image of cruelty as powerful as you are ever likely to see. Although the actors fail to connect convincingly with each other, the freeze-frame compositions are vivid, etching themselves on your eyeballs. Yet the show’s decadence is off-the-peg, and after about half an hour you long for the real thing. On the press night, there was one surprise: the fire alarm went off by accident, but its flashing lights just seemed to be part of the show. An unsubtle, but vivid night.