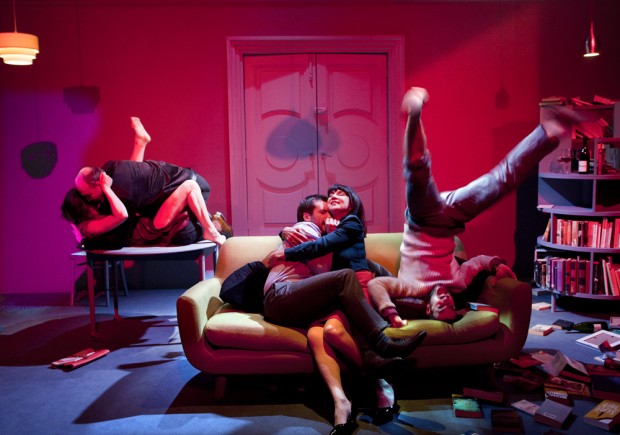 Poor Alice. She’s alone all day, with a six-month baby boy, while her husband Ben — a doctor — is out at work. Working all hours. She sleeps at odd times of the day, and at first seems to have just suffered some kind of catastrophic loss. Ben seems to be working too much, so the couple never see each other. I say “seems” because it is very soon apparent that things are really not what they seem in Québecoise actress and playwright Catherine-Anne Toupin’s brilliant 2008 play about one woman’s sense of self, and her conflicting emotions about motherhood. Oh, poor Alice.

After a brief introduction to thirtysomething professionals Alice and Ben, who live in a trendy flat in the middle of the city, we are quickly introduced to their neighbours, the aptly-named Gauche family: sixty- and fiftysomethings Gilles and Juliette, and their grown-up son François. The atmosphere is that of a nervous, creepy farce, and in a certain light the neighbours look a bit like the Addams Family, or even refugees from Rosemary’s Baby. Colours are heightened, and Juliette is a bit too intrusive, Gilles a bit too seductive, François a bit too odd.

The dreamlike atmosphere has its own vivid logic, and everything makes sense while not really making any sense at all. Gradually, it begins to feel as if the story is all happening in Alice’s mind; it’s all a nightmare; it’s all a fantasy; it’s all a disturbance of normal psychology. Perhaps all of the above. Toupin’s skill lies in conveying this with great subtlety and playing with the ambiguous possibilities of her main theme of female selfhood, female loss and female attitudes to mothering. She also thrillingly explores the rich territory that exists in the gap between what we really feel and what other people expect us to feel. And applies this to the male characters as well as the female ones.

As the evening advances, Toupin shows us the forbidden thoughts of all the members of the two families, and escalates the scenarios through a series of power games, in which desire and suggestions of desire snake through the conversations like some weird yet familiar subcutaneous serpents. Sex, seduction and sensuality soak through the action like liquid seeping deep into a paper napkin. Then, by contrast, there are moments of freezing rejection and episodes of awkward tepid non-communication. It’s like watching Pinter drunk and dizzy on red wine. Lots of red wine.

Toupin’s writing, attractively and powerfully rendered into English by translator Chris Campbell, is not a medical description of a psychological condition (although there is plenty here about male and female psychology), but rather an imaginative evocation of the strangeness of experience and the fugitive nature of feelings. It is poetic, dreamlike but also strongly realistic. The writing is bright, occasionally fiendishly sinister, with a provocative frankness that sidles up to explicit eroticism, while the form of the 80-minute play is tricksy, yet finally immensely satisfying.

The senses of lust and longing, sexual and maternal, rise up like a sickly sweet smell in director Michael Boyd’s very capable hands, in what is a co-production between the Bush, the Traverse Theatre in Edinburgh and Theatre Royal Bath Ustinov Studio. The cast is excellent, with Lindsay Campbell terrific as Alice, and similarly fine work from Sean Biggerstaff (Ben), Dyfan Dwyfor (François), Maureen Beattie (Juliette) and Guy Williams (Gilles). On designer Madeleine Girling’s versatile set the result is a psychological thriller whose twists and turns mirror the instability of personal identity under stress. Yes, this is a beautifully dark gem.