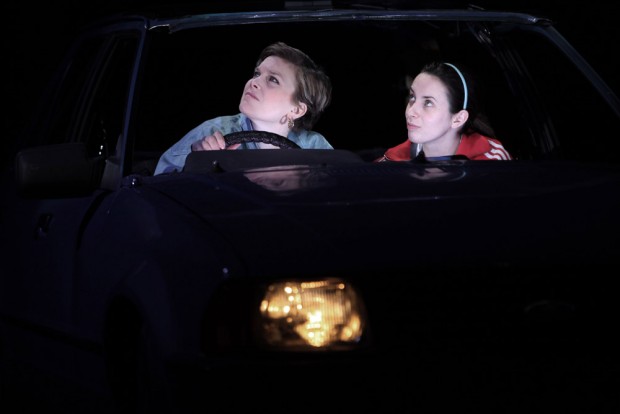 Over the past decade or so, Simon Stephens has emerged as one of Britain’s premier playwrights. As well as being a prolific penman, with three volumes of collected plays already in print, he has been tutor on the Royal Court’s Young Writers Programme and a regular at the National Theatre. He has also enjoyed collaborating with the best directors, one of whom is Marianne Elliott — their excellent version of The Curious Incident of the Dog in the Night-Time transfers to the West End next month. Now they revisit his 2002 play, which they staged together originally at the Royal Exchange in Manchester.

Set in Stockport, Elliott and Stephens’s hometown and a location he once called “one of the most hopelessly boring places in the north of England”, the story is a mini-epic of working-class life. The main character is Racheal Keats, who is only occasionally almost as poetic as her name implies, and we follow her from age 11 to age 24. She is the child of a deprived family, and we watch her pass the signposts of chav life: parental arguments, domestic violence, death of a grandparent, teenage sexual attraction, raising the deposit on a rented flat, young love and then disastrous marriage.

At first, her younger brother Billy is merely annoying. But gradually he grows into a crazy tearaway, one of those feral kids so beloved of the tabloids. He steals; he runs amok; he gets caught; he is sent away. Yet the bond between the two holds firm, and each sibling helps the other. But the same can’t be said of their parents. As early as the first scene, when Racheal naively suggests to her mum that they run away — just mum and the two kids — mum responds by saying that if she leaves, it will be on her own. It’s grim.

Like an upended bag of stolen goods, out come tumbling all the themes and issues of the play. Almost immediately Port offers a sociology of bad parenting. The older generation is either absent or out of it; there’s neglect; there’s incomprehension; there’s incommunicability. Then threats, violence and abandonment. It’s a “what not to do” manual of parenthood. This urban jungle is a place of lost souls, and misery is handed down through the generations. The only solution is to get away. If you can.

Yet, at the same time, the character of Racheal, who is on stage for almost all of the evening, gradually grows on you. She has an appealing pluck and the way her mind works constantly surprises us. From the start, she is interested in the world. Despite the aches of the losses she experiences, her heart is steady and her eyes shine bright. And she admits her mistakes and is aware of her failings. Self-reliant, sometimes funny, and often grounded in a strong sense of right and wrong, she is the jewel that can occasionally be found in the gutter.

And Stockport has a bleak awfulness in this acidic-neon portrait of urban deprivation and hopelessness, designed by Lizzie Clachan. The literal poverty of the underprivileged is matched by the poverty of their aspirations. It’s a dark vision of contemporary Britain and as relevant today as when it was first staged. Yet despite the horrors that spatter the text — perverts in the park, casual viciousness, drug and drink abuse, thieving and betrayal — this is also a strangely moving account of a resilient human spirit.

Stephens’s style mixes a cool British noir sensibility with a redemptive humanism. His writing is always exact, and he writes lyrically about hope, honesty and humour, as well as brutality and despair. His dialogues are based firmly on emotional truth. If Elliott’s production sometimes feels as if it doesn’t quite fit on the huge Lyttelton stage, there are excellent performances from the really impressive Kate O’Flynn as Racheal, partly sassy and partly vulnerable, well supported by Jack Deam as Jonathan and Mike Noble as Billy, as well as Calum Callaghan as boyfriend Danny and Liz White as mum. Deam and White also double as two other characters. But be warned: this is a gruelling and sad evening only occasionally enlightened by the weak rays of humour, or indeed hope.