In the Penal Colony, Young Vic 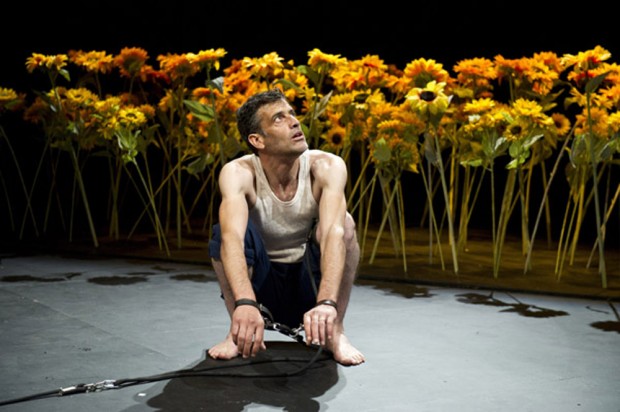 Kafka is a bit of a stranger to British stages at the moment, but elsewhere he remains a strong presence. In his short parables, as well as in his classic novels such as The Trial, he conveys a deep understanding of the human condition. But while European postmodern culture might shrug off his insights, he is still close to the heart of some Middle Eastern theatre-makers. In this production, an adaptation of one of Kafka’s most famous short stories, the Palestinian ShiberHur theatre company prove his abiding relevance.

Set in an almost deserted punishment camp, the story is as taut and spare as an emaciated prisoner. Here, in these gloomy surroundings, the Executioner is about to strap the Prisoner into a devilish torture machine called the Harrow, where a series of needles will engrave the words of his sentence onto his naked skin in a process that takes hours and inevitably results in a slow and ghastly death. But, before the execution can begin, a Visitor arrives.

Who is he? A government inspector? A human rights lawyer? Whatever his identity, he is treated by the Executioner as a new arrival who needs induction into the various processes of the penal colony. As he explains the whys and wherefores of the torture machine, Kafka’s unique voice comes across loud and clear. The mixture of ancient parable and bureaucratic nightmare is here, as well as the psychology of the master and slave relationship. It is no surprise that the perpetrator is destined to take the place of the victim.

Since ShiberHur theatre company is resident in Haifa it is likewise unsurprising that, in this version, there are glimpses of the conflict between Israel and the Palestinians. There is mention of a Military Zone and a distant general supervises the whole incarceration process. But the main themes are wider and more universal. As the Visitor is drawn into witnessing the execution, he becomes fascinated by, and complicit in, the violence. Similarly, it is typical of human nature that the Executioner bemoans the present and keeps saying how much better were the killings of the past.

Over all this the long shadow of the Holocaust and the Arab-Israeli conflict passes lightly, but noticeably. Also in evidence is some unsettlingly religious music and the fact that the writhings of the Prisoner occasionally seem like the ecstasies of martyrdom. Above everything, the torture machine symbolises the cold and calculating elimination of human beings so characteristic of the past century. By contrast, in this production — which is directed and adapted by Amir Nizar Zuabi — a long stretch of sunflowers offers a feeling of nature on the edge of the killing fields. Lovely design by Ashraf Hana.

Performed in Arabic, with English surtitles, In the Penal Colony is an hour-long adaptation that boasts three excellent performances. Amer Hlehel conveys the Executioner’s slow but sure transition from confident, cool sadism to a desperation that infuses his whole spirit, while Taher Najib’s Prisoner is rooted in his suffering body, semi-naked, angular and tortured. As the Visitor, Makram Khoury — who is familiar from Steven Spielberg’s Munich or from The West Wing — is a calm, authoritative presence. Like the production of Jon Fosse’s I Am the Wind, which was at this venue in May, this is a powerful piece of Modernist theatre.