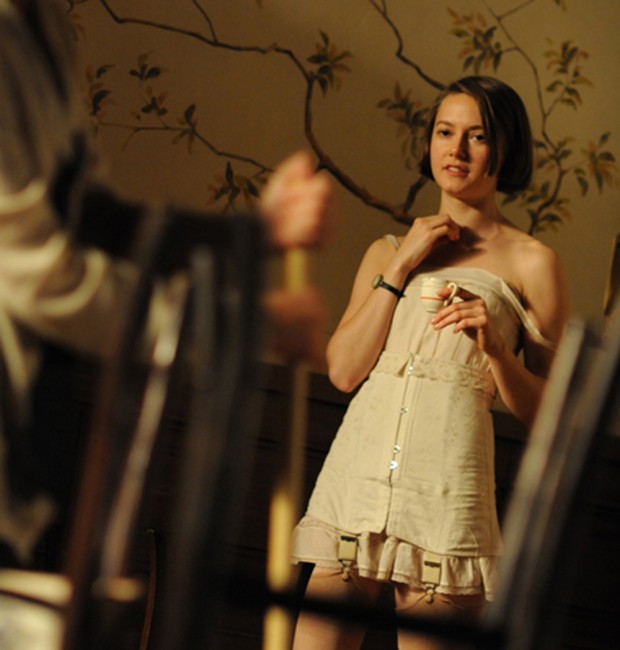 The dusty history book falls open and behold: a chapter about Vienna in 1923. In a boarding house, seven young people — most of whom are medical students — find that the air of the former Austro-Hungarian Empire’s capital city is a heady mix of the sexually invigorating and the morally asphyxiating. At the opening tonight of Ferdinand Bruckner’s rarely performed play, Pains of Youth, there were moments when the event felt as if Egon Schiele was meeting Sigmund Freud at a madhouse performance of La Ronde.

Any plot summary risks becoming bathetic, high art reduced to the status of soap opera, but here goes anyway: Marie is about to graduate from medical school when she finds out that her boyfriend Petrell has fallen for another student, the lower-class Irene. So she turns for consolation to her neighbour, the aristocratic Desiree. Meanwhile, young Freder is busy seducing the housemaid Lucy. Add Marie’s mentor Alt, and this tale of disillusionment and decadence soon begins to bubble and fizz.

Written by Austrian playwright Bruckner (pseudonym of Theodor Tagger) in 1926, this is a masterpiece of European theatre. Like a laboratory experiment, the play heats up an alembic of desire, creating an enchanting atmosphere where deranged fantasies, suicidal inclinations, easy blasphemy and sadistic acts start to spurt and splutter. Here at the high noon of modernism, before the Nazis threw cold water over the fires of creativity, are the familiar elements of progressive culture, with plenty of artistic sensibility, naïve orientalism and industrial aesthetics. As the dialogues of these young people ring with contempt for the bourgeois life of their parents and express a lust for revolt, there’s a sense of life lived at fever pitch, hectic, almost nightmarish.

Martin Crimp’s elegant English version — which originally had the more resonant title The Discontented (although a literal translation of the original would be Sickness of Youth) — perfectly evokes the existence of bohemia, with its erratic emotional swings, late-night conversations and attraction towards sexual experiment. As these medics dissect their lives, you feel a real yearning for truth and a true urge towards cruelty, especially with Freder and Irene, as well as tenderness, especially with Marie and Desiree.

As directed by Katie Mitchell, the play throbs with a heightened sense of life, an unbearable lightness of being. Instead of giving us a dull costume drama, she has created a style of movement and talk that suggests a lost world, yet without losing any emotional truth. The effect is a bit like peering at a faded silent film, although designer Vicki Mortimer’s colour palette is richly warm, with its autumnal browns, lamplit glows and ochre shadows. The acting, by a young ensemble which includes Laura Elphinstone (Marie), Geoffrey Streatfeild (Freder), Lydia Wilson (Desiree) and Sian Clifford (Lucy), builds up to that rare experience, a coherent sense of a highly stylised world. Even when they are still, an electric current runs through the group. Committed, convincing and a little bit uncanny, the cast inhabit a hectic mindspace where the yearning for excitement clashes with the violence of truth. Like a wild mix of hash oil and velvety claret, the result is young, young, young.