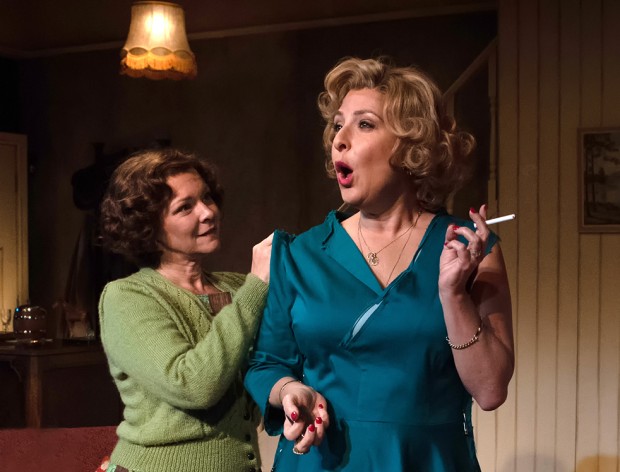 We do love our spy stories, don’t we? The idea of betrayal, both political and personal, seems to be a strong part of our national identity. And so is telling stories based on real events. Playwright Hugh Whitemore, who died in July, based his Pack of Lies on the Portland spy ring, a secret Soviet operation which was active from the late 1950s until 1961. This new production at Menier Chocolate Factory is the first London revival since it premiered at the West End’s Lyric Theatre in 1983, starring husband and wife team Judi Dench and Michael Williams, and for which Dench got an Olivier Award. Intriguingly, this revival stars their daughter Finty Williams, alongside Jasper Britton and Tracy-Ann Oberman, as well as Maggie Smith’s oldest son, Chris Larkin.

Whitemore adapted Pack of Lies from his own Act of Betrayal, part of the BBC’s Play for Today series in 1971. That was yesterday, but today the story has a renewed contemporary feel after recent revelations about the agents behind the Salisbury nerve-agent attack, and has a similarly quintessentially English location: suburban Ruislip in winter 1960. Set in the cosy lower-middle-class home of the Jackson family, the opening introduces us to Bob (Larkin), the unexciting head of the family, his stay-at-home wife Barbara (Williams), and their teenage daughter Julie. One day, a mysterious and unexpected visitor (Britton) calls — and turns their mundane lives upside down.

Calling himself Stewart, he says he’s a civil servant with connections to Scotland Yard (yes, he’s a British spy), and he has an important favour to ask the Jacksons. Could his agents use their house as a base for surveillance of their neighbours? It wouldn’t take long. It wouldn’t be an inconvenience. It would be a great help. Although they are both law-abiding, neither Bob nor Barbara are particularly keen on this. Barbara is particularly upset: the Canadian neighbours in question, Helen (Oberman) and Peter Kroger, are her friends so how could they possibly be foreign spies? And, anyway, isn’t spying inherently sneaky, somehow unEnglish? Unfair even? Gradually more complexity comes into focus. Helen is particularly close to Barbara’s daughter Julie, and this schoolgirl has her own secret life: she likes a particularly unsuitable motorbike-riding boy, who is disapproved of by her parents.

Whitemore tells this fictionalised version of the Gordon Lonsdale spy story with immense fairness and humane empathy. As well as sympathetic conversations, with traditional British awkwardness and understatement, he includes several moments when the characters directly address the audience, allowing us to have a brief look into their hearts. This gives a fair and even-handed character to a play that is slow to warm up, and only gradually reveals its emotional force. It is down to Barbara to articulate the ethical and psychological issues at the centre of the drama. She sees her betrayal of her friendship with her best friend, the suspect Helen, as an act of treachery on a par with the Soviet menace. And she finds the passionate energy to give voice to this.

In this atmosphere of Cold War conflict, both Helen and Peter explain the other side of the affair, showing us two attractive individuals who retain some of the idealism of their youth and their hatred of the violence used by capitalist societies against their most defenceless members. In reply, Stewart, the coolly calculating representative of the British secret service, suggestively and subtly sketches out the atrocities and dangers of Soviet totalitarianism, and the damage done by Russian infiltrators. None of this matters much to Barbara, whose traditional values are appealingly simple. She perceives, as most of the others do not, that one lie is as bad as another, and that the main victim of deceit is trust, which, once compromised, is hard to rebuild. And this applies as much to her own daughter as to her neighbours.

The chief pleasure of this rather old-fashioned piece of theatre is the quiet sense of recognition of a past age, when suburban life was a safe place, a mental terrain of somnolent calm, peopled by hard-working, honest and conformist citizens whose domestic arrangements preferred water bottles to sex, tea to whisky and security to excitement. Whitemore calmly and coherently evokes this now distant world, and shows how its quiet surface is violated by the brutal realities of Cold War conflict. Today, the effect of this kind of playwriting is what used to be called workmanlike, competent enough, but not particularly invigorating.

Hannah Chissick’s production is likewise reassuringly slow and solid, with Paul Farnsworth’s detailed set evoking the late 1950s perfectly. And the atmosphere of suburban reality is heightened by meticulous performances from the cast: Williams is particularly impressive as the moral core of the story, a performance that rises to a moving pitch of emotional intensity, and she gets excellent support from Larkin as her husband, Oberman as her neighbour and Britton as the cool-headed and mansplaining Stewart. Alastair Harvey is Peter and Macy Nyman plays Julie. In the second half there are a couple of raw moments of hot feeling, but boy you really do have to wait for them.