Out of Water, Orange Tree Theatre 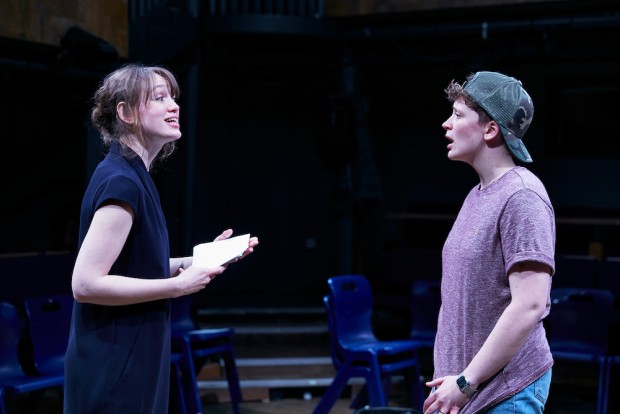 Most new writing for the British stage is timid in subject matter, predictable in plotting and sadly unambitious in its range of emotions. But then there are playwrights who manage to buck this trend, to be intellectually and theatrically exciting as well as emotionally profound. One of these is Zoe Cooper, whose previous play at this venue was the very impressive Jess and Joe Forever in 2016, and whose new play, created in association with the Royal Shakespeare Company, is that rare delight: a small play that radiates with a wider resonance.

Set in South Shields, a coastal town near Newcastle, the play tells the story of Claire, a middle-class London teacher, and her wife Kit, a police officer who is a native of this place. She has persuaded her spouse to return with her to her home town, because the air is fresher, she has family networks there, and it’s a good place to bring up the couple’s baby. So when Claire manages to get a new job as Inclusion Manager at the same secondary school that Kit once attended, she doesn’t tell the Head that she is pregnant. Starting her work with some of the school’s less well integrated pupils, Claire meets Fish, a non-binary student who has a keen interest in swimming in the sea.

As the interaction between teacher and pupil develops, amid the hurly-burly of normal school activities, three actors play all of the characters, from the over-friendly Head to Brendan the sports science teacher, as well as Kit’s mother, assorted pupils, relatives and townsfolk. In this lively panorama of everyday life, Claire becomes interested in Fish, who lives in care and has a fascination with Elaine Morgan’s 1970s feminist theory about our evolutionary origins as “the aquatic ape”, the idea that our species spent some eons not just on the savannah but in the sea. For Fish, this idea — which has recently also been explored by David Attenborough no less — offers an exciting sense of personal freedom in an imaginary world where they are not bothered by other people’s preconceptions and prejudice.

Things get complicated when, on top of all the usual difficulties of moving to another part of the country, Claire eventually has to tell the Head, and her class, that she is pregnant, and when her project of getting her students to present their ideas on stage during a whole-school assembly runs into problems. She has to confront the disappointments of her students, and her own uncertainties about her life choices. One of the strengths of Cooper’s writing is its effortless mixture of narration, with Claire and Kit occasionally disagreeing about how to tell their story, and dialogue, with assorted characters that pop smoothly in and out of the narrative. She also sketches out the natural beauty of the North East, while also emphasizing the hostility of the cold, windy and grey weather.

The effect is theatrically exciting, with Cooper’s lightness of touch, eye for quirky detail and humorous satirical pokes at, for example, the bureaucratic language of contemporary education, combining to create a subtle but great tidal pull on the emotions. The play’s title suggests the image of people feeling as if they are fish out of water, and the theme of belonging floats its way through the entire piece. Kit is glad to be back in a place she knows is home, but both women find it hard to be openly lesbian at work and in public. Their awkwardness and insecurity are mirrored by Fish’s suspicions of authority, secretiveness and resignation to the fact that she will always be an outsider.

Using the metaphor of putting a toe in the water, Cooper argues that each individual needs courage to take the plunge into affirming their own identity, whatever that is, and she suggests that this bravery will be rewarded. This might seem like wishful thinking, but the thrill of her writing and the feelgood and affirmative beauty of the piece’s ending gives these ideas an emotional depth beyond mere words. Although the writing occasionally veers dangerously close to the didactic, there is a core of tenderness and warmth to this story that wraps the audience in a loving embrace.

Guy Jones’s production is designed by Camilla Clarke, whose battered floor set evokes cash-strapped school buildings, and the front row of the seating is blue plastic chairs. In the second half, the floor fractures and if this visual illustration of the strains in Claire and Kit’s relationship is not strictly necessary, all three actors are so skillful that you can easily forgive this overt signaling. Lucy Briggs-Owen (Claire) and Zoe West (Kit) make a convincing and contrasting couple, the one so perfectly metropolitan, the other more subtly northern, while Tilda Wickham suggests both the anger and the uncertainty of Fish. This sensitive exploration of gender identity is fluidly performed, richly resonant and quietly inspiring.