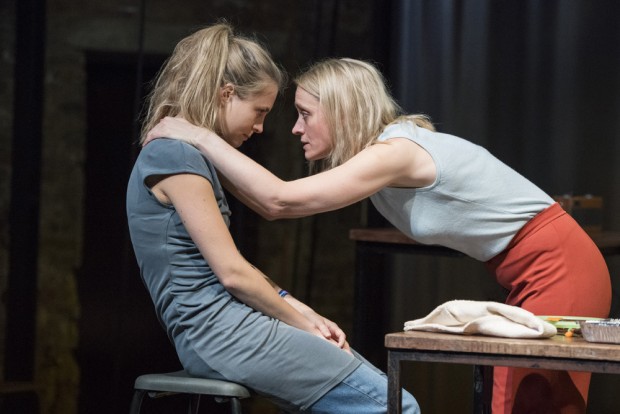 Oil is so precious that it has been called black gold. It is buried deep in often inhospitable places yet it has the power to transform all of our lives. The brilliant thing about Ella Hickson’s new play is that it aspires to use the metaphor of oil to explore other buried and precious things: such as our emotions about children, parents and love. But although her initial ideas are great, the detail of her writing and of her imagination, and especially her sense of history, are a bit disappointing.

In Oil, the age of the black stuff is also the age of women’s gradual liberation. Hickson has created five scenarios which are all about a gutsy woman named May (played with forceful feeling by Anne-Marie Duff). In each, she appears in a different incarnation, giving us a glimpse at five possible lives. In the first, May is a Cornish farmer’s wife in 1889, oppressed by masculinist society in general, and by her mother-in-law, Ma Singer, in particular. Although she is passionately in love with Joss, the young man who owns and runs the farm, she doesn’t agree with everything that he does. She is pregnant with her daughter, and the catalyst for her emancipation is the arrival of William Whitcomb, an American who is selling kerosene, an oil that will transform many lives.

In the second scenario, the setting is Tehran in 1908. Here May is a servant, with an eight-year-old daughter, Amy, working at the British colonial residence. Her position is precarious, and she’s looking for a way out. In the course of a party, which we see from the point of view of the servants, she gets two chances to escape: one is an offer from Thomas, another servant, and the other is a far less respectable proposition from Officer Samuel, a navy aviator and, like May, an outsider. He brings news of how the teenage Persian Shah is being courted by the British, who want the oil on his land.

The third episode of this female journey sees May transformed into a Hampstead businesswoman in 1970. In her 40s, she is an oil executive and Amy is her 15-year-old daughter. But while she is trying to discourage Nate, Amy’s 16-year-old boyfriend, from forming too close an attachment to her offspring, an international crisis barges into her kitchen. There’s been a revolution in Libya, led by Colonel Gaddafi, and very soon Farouk, a representative of the Revolutionary Command Council, is in the room, negotiating with May and Tom, a timid work colleague, about the nationalisation of the oil wells in north Africa.

The fourth and fifth scenarios are both set in the future. In 2021 Baghdad, May, now an MP, arrives in the desert to find Amy, now an aid worker, to persuade her to return home to England. Finally, we’re back in Cornwall, in 2051, when the age of oil is over, and May and Amy are much older, sitting in the cold because fuel stocks are now low. Outside the winds of ecological disaster howl, and inside the two women grumble about the shortages of power. Into this misery comes Fan, a Chinese salesperson who is promoting the energy source of the future — cold fusion.

There is no doubt that this is a hugely ambitious and fascinating epic of five female-centred stories. Not only do May and Amy share the same letters in their names, so mother and daughter blend into one person, but every scene shows how the influence of men on their lives is getting smaller and smaller. Each scenario has links to the others, usually with the image of a dream of a burning man, or, more broadly, with mentions of the importance of oil to the lives of the participants. Oil here is variously an exotic import, an imperial prize, a source of work and wealth, a bargaining tool and the cause of ecological disaster. It is also a powerful metaphor for our emotional lives — a buried force that bursts out and changes everything.

But while I welcome the breathtaking scope of these stories, clearly influenced by Caryl Churchill, I’m also conscious of how unsatisfactory the play is. While oil does play its part in all of the scenes, this is much more about mothers and daughters than it is about politics or history. (It’s a bad sign that the programme is full of essays about the global themes of the play, which should ideally speak for itself.) And the main problem is that the mother-daughter relationship stays the same in the first four scenarios: mum is nagging and controlling, daughter is antagonistic and rebellious. This repetition of the same feels as if Hickson is arguing that this is the only kind of mother-daughter relationship that exists. I also found the ending of the play to be hopelessly didactic, and much of the story simply proves that when women behave as badly as men they will get rewarded. There is no socialist feminism in this tale.

I was also unconvinced by the playwright’s sense of history: while the Victorian scene was credible, the Empire and Hampstead scenarios felt all wrong. In the former, Hickson imagines servants criticising their betters without hesitation, while in the 1970 one she seems to believe that, at this time, young teenagers were already sexually precocious and demonstrative, while also being ecologically aware to an amazing degree. Both of these ideas are just plain wrong. To be successful, historical drama should give you the feeling of the past as a foreign country: Hickson doesn’t, and isn’t.

Although Carrie Cracknell’s production, which owes a lot to Katie Mitchell’s work, is sometimes magical and exciting, it is also sometimes poorly lit and inaudible. Still, Duff is a great actress to watch, by turns punky and fragile, powerful and pole-axed. When she reaches into her guts for the core emotion of the scenes, you feel with her. Likewise, Yolanda Kettle does a good job as Amy, developing from a child into an adult over the course of the evening. For the rest, Ellie Haddington is an impressive Ma Singer, Patrick Kennedy a sinister Officer Samuel, Tom Mothersdale a passionate Joss and Sam Swann a solid Whitcomb. Lara Sawalha and Christina Tam provide a much-needed multicultural angle to these tales of Empire. In addition, Kennedy and Swann play several other parts — it is an epic after all. As you’d expect, Vicki Mortimer’s design is elegant and functional, while Luke Halls’s videos captures the sweep of history. Some audience members will love the ironic use of Justin Bieber’s “Love Yourself”, but others might wonder what exactly is the dramatic point of the whole enterprise?