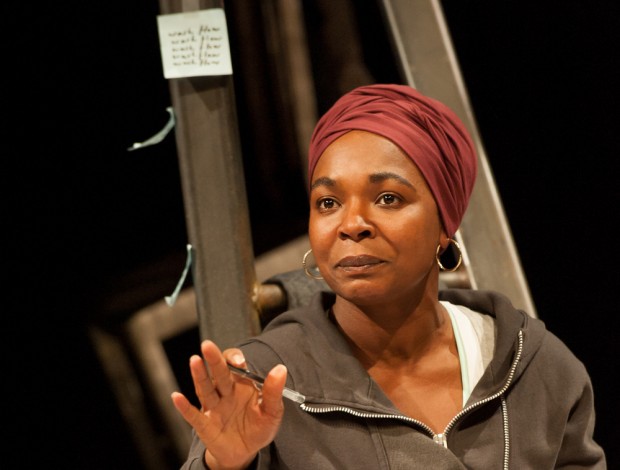 One of the best kept secrets about contemporary theatre is that audiences rather like short plays. Of course, there’s nothing wrong with epic classics, but sometimes it makes a change to witness a playwright who has something to say and manages to say it with economy in 90 minutes or less. New writing’s master of this trend is debbie tucker green, whose plays don’t linger too long on stage, nor do they burden you with an interval. Her latest, Nut, is typically short, just 70 minutes — but is it any good?

Elayne, a young black woman, is depressed. When the plays starts she is discussing her funeral with her white friend Aimee. It’s an exchange full of light banter and deep undertones; Aimee thinks she will die of natural causes, but she also expects that Elayne will kill herself at some point. They evidently know each other well, as far as anyone can be said to know another person. But their robust communication, you feel, might break down at some point. Then they are joined by Devon, a young man of a similar age. Like a piece of music the two-part harmonies of the first scene become a triangle of voices, but the themes are more or less the same: hints of depression, thoughts about suicide. And that annoying habit that some people have of speaking on your behalf. A little boy sings; there are jokes about the fact that Elayne’s front door bell doesn’t work. Well, that’s understandable — she doesn’t like visitors.

The third scene crosses town to the house of Elayne’s younger sister, called the Ex-Wife. It’s Wednesday, the day when her Ex-Husband has custody of their young daughter for the day, for 12 hours to be exact. The tangled feelings of this couple are still raw, and each tries to score points. Each accuses the other of being a poor parent. As in the previous scenes, cigarettes are produced, potent symbols of addiction and death. They prompt the thought that emotional tangles are also addictive — we are drawn to people who are bad for us.

When the Ex-Wife finds time to visit her older sister Elayne, we see some of the scars that both women bear. If Elayne is the more obviously damaged one, her sister is not exactly well. There are hints of post-natal depression; once again, both women share cigarettes, a moment that suggests a complicity in enjoying things that are bad for you. Here the metaphors come at you with a spark, and then disappear in a puff of smoke.

In this play, tucker green’s writing is as insistent as ever, but quieter, more controlled. Sharp. Spiky. Subtle. As usual, there is a joy in the language, which sometimes dances, sometimes drills into your ears — or is rammed angrily down your throat. Sometimes serious, sometimes even skittish. Under the surface exchanges throbs the subtext, suggesting a world of anguish, a universe of pain. The laughter is acidic; it sticks in the gullet. Gradually, questions arise: is this a play that happens inside the head of one woman, or of several? Which bits are real, and which imagined? Who can you trust?

In the National Theatre’s excellent Shed space, Nut is directed by the playwright, on designer Lisa Marie Hall’s modernistic set, which evokes domestic spaces above which hover a swaying mobile and huge rusty girders which threaten to crush the characters beneath. Menacing. As Elayne, Nadine Marshall finely conveys the idea of a friendless and insecure individual, whose sense of self-confidence is dangerously fragile. As Aimee, Sophie Stanton comes across as stronger, more rooted. Gershwyn Eustache Jr and Sharlene Whyte are the Exes, while Anthony Welsh is Devon. Although this play is not long, you leave the heat of the theatre certain that it has delved deeply into a well of indescribable sadness.