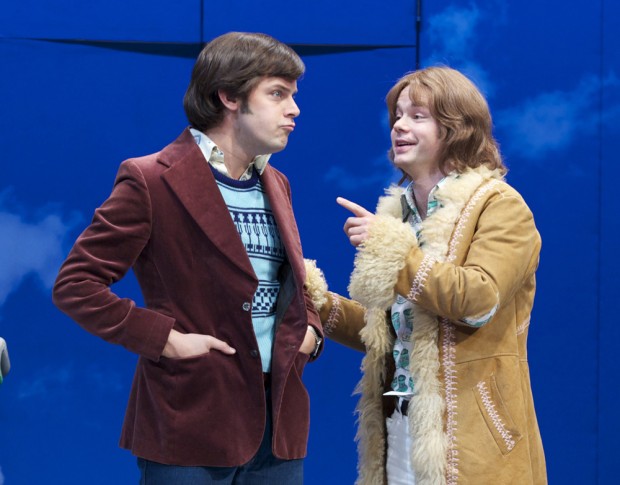 You could call it the BBC Four effect. It’s fact-based fictions set in the past, more often than not about the absurdities of sexual mores or other changing customs. In the latest theatrical example, Steve Thompson’s new play — which opened tonight — we time travel back to December 1975, when the surreal BBC comedy series Monty Python’s Flying Circus was due to be broadcast all across the United States. But wait a minute, here’s the snag: about one in four of the show’s jokes have been cut. Why?

Pythons Michael Palin and Terry Gilliam go to the States to find out. At first they are told by the ABC broadcasters that the cuts have been made in order to make room for adverts, but they soon discover the real reason. All of the programme’s naughty bits have been axed. Any mention of penises, vaginas, sex, bisexuality, nudity or any bodily functions have been censored. Jokes about sexuality have been chopped. A sketch about the torture of an Asian man in a turban goes the same way.

Okay, so this is a battle between English artistic integrity and Middle American morality. The teams are as follows: Pythons Michael and Terry are joined by their American agent Nancy and their corporate lawyer Osterberg. The ABC network is represented by television executives Franklin and Myers, plus lawyer Fried. At first, the argument between the financial exigencies of commercial television — articulated most clearly by Myers — seems to prevail. After all, the Pythons are getting a load of money from the American broadcast, and commercial telly is quite different from the cosy, licence-fee subsidised BBC.

But, spurred on by Nancy and Osterberg, the Pythons gradually bite back. Terry, who was born in America, doesn’t need much persuading, but Michael the diffident Brit is unwilling to fight, and is scared by the idea of a court appearance. The play charts his transformation from worm to lion. Slowly, the sheer silliness of the ABC’s censorship proposals provokes Michael to take on the prudes. But a strong point in Thompson’s play is that these conflicts are never as simple as they at first seem.

The central trial scene, when the Pythons apply for an 11th-hour injunction to prevent ABC from screening their programme, is a joy, mainly because the judge, one Lasker, is almost as eccentric as the Pythons. With his motto of “I love to laugh”, this larger-than-life character presides over a surreal extravaganza in which the laughs come fast and furious. It’s a masterclass of character writing and comic fiction.

In general, Thompson’s larger themes often appear in their underpants, being suggestive, allusive and funny. For example, the Pythons argue that censorship actually perpetuates the vulgarity it aims to stamp out. Bleeping out naughty words on television simply draws attention to those words: “The bleep is what makes it obscene — it’s the effort to conceal a thing that makes it vulgar.”

No Naughty Bits also plays humorous games with national stereotypes. The Americans come across as litigious, censorious, po-faced (very), money-minded and efficient. By contrast, the Brits are easygoing, tolerant, eccentric, funny (very), arty and bumbling. One of the stimulating things about the play is that these contrasts are heightened, and then questioned by the author. You can’t fault Thompson’s research: by amazing coincidence, he was reading Palin’s published diaries when the Hampstead offered him a commission. And he’d just got to the chapter about this 1975 court case. Also, he has worked a lot in television recently (Sherlock, Silk), and felt that Palin’s 1970s experiences were pretty much par for the course for this medium. Then, Palin phoned him up, they met and talked, and Palin also introduced him to Terry and Nancy.

Edward Hall’s production nods towards this authenticity while playing little games with the play’s fictional character. Inside a television frame, Francis O’Connor’s set has an aptly Pythonesque feel, with a blue cloud-flecked sky which occasionally hosts the iconic Python foot and other models which refer to the original series, and the visual gags are good. On the press night, the gales of laughter were punctuated by the approving applause of recognition. As the pliable, self-doubting Palin, Harry Hadden-Paton portrays a man finding his way to humour, truth and the right way to behave. Sam Alexander’s Terry is appealingly zany, while Matthew Marsh’s hilarious Lasker and Clive Rowe’s majestic Osterberg contrast nicely with Izzy van Randwyck’s corporate Franklin. Like much of his previous work, Thompson’s play is well plotted, and has a small sting in its tail. It’s an extremely enjoyable account of a forgotten episode in the history of humour, a lovely example of the BBC Four effect.