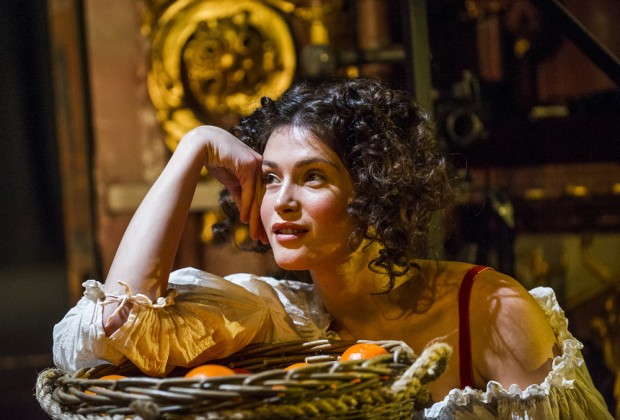 As a subject for drama, theatre history is always popular in the West End. Squeezed between Mr Foote’s Other Leg, which has recently closed at the Theatre Royal Haymarket, and Mrs Henderson Presents, which opens soon at the Noël Coward Theatre, comes Nell Gwynn, a West End transfer of the popular show from Shakespeare’s Globe, with rising star Gemma Arterton as the eponymous heroine. But is this rowdy Restoration romp deserving of the lavish praise it has already garnered?

The story of Nell, which begins in the 1660s once the anti-theatrical Puritans have been sent packing, is well known. Her rise from orange-selling tart in the venues of Restoration London to starring in some choice roles herself, and finishing up as King Charles II’s mistress and mother of a couple of his many children, is told by playwright Jessica Swale briskly enough, with a real comic flair and a bawdy sensibility that winks and smirks its way across the stage. Part Carry On, part sing-a-long (with much good-natured music), it’s most engaging when it’s most silly.

And yes, there are some nods to contemporary relevance: at one point, Charles cries “Down with austerity!” A real crowd-pleaser that. Does it matter that this is blatant anachronism? Not a bit! But as well as telling the story of the successful career of a former whore turned actress, and royal companion, Swale also delights her audiences by satirising the highly artificial conventions of the theatre of the time, so we get to see the old cavalier Thomas Killigrew rehearsing plays by John Dryden for the King’s Company, one of whom is Edward Kynaston, an actor who specialised in women’s parts. There are bits about the gestural language of fans, about the nature of tragedy and about a new attitude to naturalism.

The advent of women like Nell, who were the first actresses in British theatre (the female roles in Shakespeare having been played by boys), thus created conflict with old hands like Kynaston, just as the king’s new mistress came into conflict with Lady Castlemaine, a former royal mistress, and Louise de Keroualle, his French mistress. The scene in which Nell gets the better of her French rival is a joyful demonstration of Gemma Arterton’s performance skills — but probably won’t do much good to bolster the pro-EU campaign.

In general, Nell Gwynn is a sunny portrait of the court of the Merry Monarch and works best when it is most populist: there’s even a scene-stealing appearance from a King Charles spaniel. Of course, Nell’s real story had darker shadows (she was probably a child prostitute) and her life was both harder and less charming than that shown here, but who cares? This is an out-and-out celebration of the fun of theatre and a warm-hearted comedy about performing and pretending. If you’re looking for laughs, and a romping brash show, this is great. If you want subtlety or a more serious blend of feminism, then avoid this like, ahem, the plague.

Arterton shines in the lead role, radiating an appealing pertness and broad knowingness that powers the show. Her energy and command are very attractive. Although her Cockney accent drops off as often as her shawl leaves her shoulders, and she struggles a bit in the more sober scenes, she is delightful when most raucous and riotous and spitfire-ish. In Christopher Luscombe’s happy production, which is designed by Hugh Durrant as a visual extravaganza, all baroque drapes and tassles, the supporting cast is great: David Sturzaker (Charles), Greg Haiste (Kynaston) and Nicholas Shaw (Dryden), to single out but three. Michele Dotrice is hilarious as Nell’s dresser. The whole ensemble sings lustily and merrily. Excelling when it is most shameless, this is a joyous example of populist theatre.