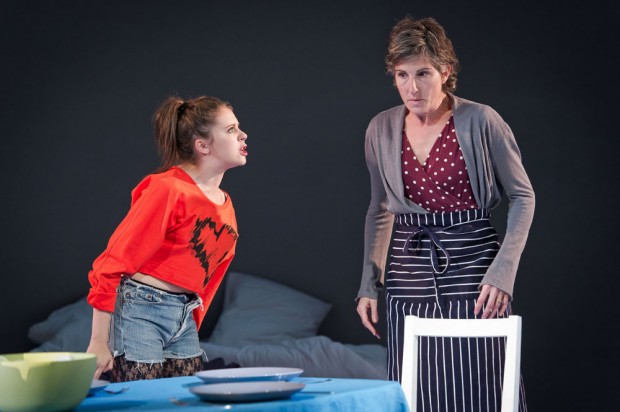 “Why does anyone ever have kids?” By the time a character in April De Angelis’s bright new comedy utters this exasperated exclamation, there are many in the audience — whether parents or children, or both — who must have had the same thought. And more than once in the evening. For this exceptionally hilarious and perceptive play, which opened tonight, not only tickles the insides of your arm, but also lights up the senses and then gives you a quick cuddle, too.

Hilary is 50; she lives with her husband Mark and 15-year-old daughter Tilly. It’s a nice middle-class family. So when Tilly brings home an equally underage boyfriend, Josh, and it emerges that they are having sex, Hilary and Mark (well, Hilary mainly) decide to discuss the situation with Josh’s parents, Roland, an actor, and his wife Bea. Also on hand to help Hilary cope with her precocious daughter is Frances, her best friend, and a survivor of the sex wars who has managed to remain child-free.

In this domestic drama, events and jokes come tumbling out as if a cupboard door has been swung open and the contents poured out in a minor earthquake: puppy love, marital tensions, job insecurity, sexual desire, underage sex, teenage pregnancy, trial separation, female friendship, parental anxiety and ironic post-feminism. Phew! The pace of the writing is fast and febrile, and the jokes are really funny.

This is one of those plays about family life that immediately touches a chord with the audience. The parents laugh in recognition; their children giggle in disbelief. It helps to be a bit tipsy so that the one-liners zing off the intoxicated brain cells on the underside of your cranium. But it really doesn’t matter. If you happen to be sober, De Angelis’s writing will soon make you helpless with laughter or dizzy with delight. Yes, it’s that good.

But just as at every party there’s always a serious guest, so here the question of what the play is saying must eventually be addressed. I think that De Angelis is showing how parents, and especially liberal middle-class parents, misjudge their offspring, and how, in their turn, the children don’t understand their parents. Within this symmetry, the playwright’s sympathies lie slightly more with the mother than the daughter, although in the surprisingly warmhearted and emotional ending, Tilly is allowed the last word.

As you’d expect from a playwright who emerged as a powerful feminist in the 1980s, with plays such as Ironmistress, the women’s point of view is sharp and acerbic. Like her other recent plays, such as Wild East and Amongst Friends, there is a strong vein of politics although the play’s account of Hilary’s feminism and liberal sympathies, which are more or less irrelevant to Tilly, seems to duck the more serious question of women’s rights today.

Amid all the humour, De Angelis deftly sidesteps the serious issues she herself raises, and because this is a comedy no one seems to mind. Some moments, such as when the parents can hear their daughter having sex through the walls or when a gun is waved around, seem to trouble the easy laughter of the audience, but it is De Angelis’s great skill that she can lift us out of seriousness with a rapid scene change, or in the space of a quick gag.

Smartly directed by Nina Raine, Jumpy has a smashing cast led by the superb Tamsin Greig as Hilary and the wonderful Doon Mackichan as Frances. Bel Powley’s Tilly is a convincing mix of sulky indifference and passionate anger, while Ewan Stewart’s Mark and Richard Lintern’s Roland do their bit. The play has a great soundtrack and features the most hilarious striptease in recent theatre history. Whatever your family life is like, you’re bound to find plenty to make you smile in this excellent show.