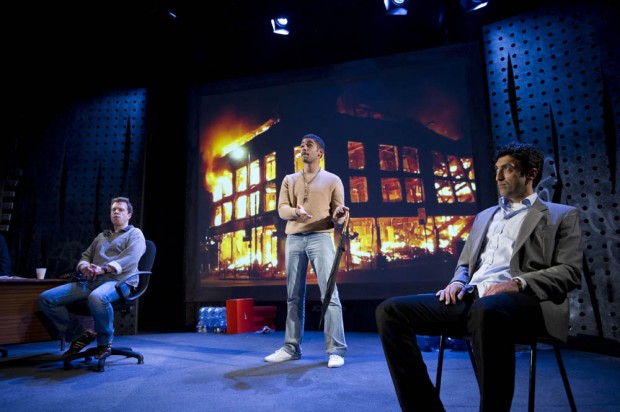 Ever since 9/11, political theatre has mobilised the techniques of verbatim drama, and the Tricycle Theatre in Kilburn, north London, has an impressive reputation for its tribunal plays, often staging the proceedings of judicial enquiries. Earlier this year, they bought us Tactical Questioning: Scenes from the Baha Mousa Inquiry. Now, as an instant response to this summer’s disturbances and apparently provoked by outrage at the government’s unwillingness to hold a public enquiry, comes The Riots, which opened tonight.

Written by journalist Gillian Slovo, who was part of the team responsible for Guantanamo: Honor Bound to Defend Freedom (a big hit on both sides of the Atlantic), the play offers a bold panorama of civil disaffection. Following the shooting by the police of Mark Duggan, there were riots in Tottenham, north London, which in subsequent days spread all over the capital, and to some other parts of the country. The looting, arson and disorder during 6-10 August this year was so bad that it quite spoilt David Cameron’s holiday (he had to fly back home).

The first half of The Riots — which is based on Slovo’s extensive interviews with many participants and observers — gives the story of the initial Tottenham protest at Duggan’s death, a small demonstration which was mishandled by the police, and its gradual escalation into widespread disorder. Amid the testimony, cars burst into flame and video images of looting and arson are projected on the back wall of the stage. Useful maps help to make sense of confused events.

There is a density of detail that is compelling: members of the community recognise youngsters they’d last seen in school, Muslims break their Ramadan fast and then go out, youth spoil for a fight, and there’s a feeling of heat and war. A mother tests looted kids shoes on her child, looters cook hamburgers in McDonald’s. Police drafted in from other areas have to use an A-Z map to find their way around London. A former Olympic Ambassador makes her point. There’s plenty of evidence of emotion: adrenaline highs and the stomach-churning fears of the police and victims of arson. The carnival atmosphere is neatly conveyed, as well as the joys of shopping without money.

In the second half, the play offers a wider perspective of the riots in the context of police stop-and-search practices, and their attitude to youth. Popular anger against the boys in blue gets an airing, the issue of youth unemployment is discussed and the reasons for the violence and looting are once again kicked around. Community leaders such as Stafford Scott and Martin Sylvester Brown mix with anonymous rioters, while politicians such as Michael Gove and Iain Duncan Smith confidently show how out of touch they are. Familiar London faces such as Diane Abbott MP (played by Dona Croll) and Camila Batmanghelidjh get a laugh of recognition.

Slovo has done a fine editing job and her assembled evidence tells a good story which has the smoky smell of truth. Director Nicolas Kent uses a large cast to present the fascinating material in a cool, restrained way, with powerful sound effects and dramatic video clips. The acting is uniformly solid, with everyone adopting the interviewee’s fallback position of calm explication. Luckily, the material is interesting enough to survive dead-pan delivery. The Riots is both an enthralling discussion and a powerful reminder of the anger boiling up in society today.