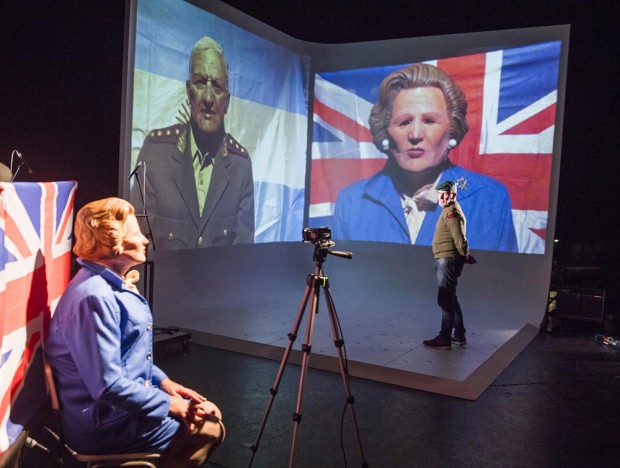 Like the 1956 Suez Crisis for a previous generation, the 1982 Falklands War (or should that be Islas Malvinas War?) was a turning point for all those who lived through the Thatcher decade. Such was the hysteria at the time that to protest against the conflict was to attract accusations of treason — I remember one anti-war march in central London where the police outnumbered the demonstrators, and filmed us all. Some 900 British and Argentinian soldiers died in the fighting, but what happened to the veterans that survived?

In Minefield (Campo Minado), which is being staged as part of the London International Festival of Theatre (LIFT) and has already been seen at the Brighton Festival, Argentinian theatre-maker Lola Arias brings veterans, three British and three Argentinian, of both sides together to explore the conflict and its aftermath. The play has been created collaboratively so the ex-soldiers have both contributed to the text (in both English and Spanish) and act in the production, which means that their memories are the battleground across which they still trudge. And it’s hard to deny the inherent interest of their experiences, many of which were traumatic. At the same time, the idea that witnesses have something more authentic to say about war than those who use fiction and imagination is, to me at least, deeply suspect.

The veterans are poignantly awkward when they take to the stage. Lou Armour, now a special needs teacher, shows a projected clip of himself breaking down during the filming of a 1987 documentary about the war. Marcello Vallejo, who became an athlete (“Ironman,” he says ironically) after the conflict, confesses that the experience of war led to a period of drink and drug abuse because he wanted to blot out the memory. Ruben Otero, now a member of a Beatles tribute band, survived the sinking of the General Belgrano battleship, in which more than 300 of his fellow soldiers and sailors died. Gabriel Sagastume, an unwilling conscript, tried to shoot, but his gun jammed. David Jackson enjoyed cross-dressing during army shows, while Sukrim Rai — a Gurkha — was more humane than the cannibalistic reputation of these fearsome fighters might lead you to expect.

Minefield lasts 100 minutes and tells the personal stories of these six men using a battery of theatre techniques. Written and directed by Arias, the piece is in two langauges and has a documentary feel, and many memorable moments: Marcello revisits the islands and finds the remains of his abandoned blankets, which he now handles like religious relics; Sukrim sings a magical Gurkha song; David performs a striptease while the rock band plays; one raid is shown using toy soldiers and a model house; old photographs enable us to see the performers when they were young. One encounter is staged as a chatshow, another as a therapy session. The main difference between the protagonists is that while the Brits were professional soldiers, the Argentinians were conscripts, and therefore their morale was lower.

Of course, the minefield of the play’s title is a metaphor for memory: treacherous territory that needs to be crossed with care and might prove explosive. And the costs of war — trauma, trauma and more trauma — are not ignored, but in general the message is one of reconciliation and redemption. All these men have survived, have got better and have confronted their most damaging prejudices against each other. They meet again in a spirit of what looks like camaraderie. If there is very little new in their accounts of war, the piece does give off the tang of truth. So what’s missing?

Passion, maybe. It is a curiously cool, almost ultra-cool, piece of theatre. Because the fiftysomething men are not trained actors, their performances are touchingly laidback. There are no histrionics, except during the climactic song, but no emotional sharing either. The effect is a kind of super-Brechtianism, except that there is little in the end to discuss. There’s a wry and friendly vibe, but little to engage the audience’s feelings. Although the play illustrates the conflicting views of who should possess the islands, nothing much seems to be at stake anymore. In style, Arias uses some of the techniques pioneered by director Katie Mitchell (especially onstage filming), with an additional dollop of ironic humour. The design, by Mariana Tirantte, is visually beautiful and the pace is fast-moving, but I did miss some emotional heat. It’s very enjoyable, but in a coolly detached way that not everyone will like.