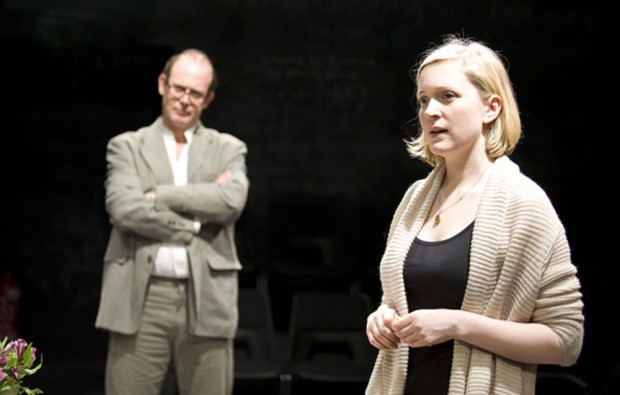 The second play in this venue’s ambitious Schools mini-season is the first drama to tackle the currently contentious subject of Free Schools. While the earlier play, John Donnelly’s The Knowledge, was a powerful account of how a young teacher is blooded in her encounters with a group of unruly kids, the second, by Steve Waters, focuses more on parents, and shows how a fortysomething teacher, Rachel, joins a group of middle-class west Londoners in order to set up a Free School.

Rachel is under stress. Martin, her ex, has a new lover, and so he wants to leave London and move into the countryside. Of course one of the attractions would be a good school for their son Sam. But the idealistic Rachel, who works in a local bog-standard dump called Mandela, wants to stay in Shepherd’s Bush. Instead of fleeing the metropolis, she would rather change the school system from within. That is, until she meets Nick, an energetic and persuasive leader of a group of parents who want to set up their own Free School.

Rachel’s awakening to the idea of creating a Free School occurs with all the suddenness and fervour of a religious conversion. She positively shines with her new-found belief. But the other members of the group, namely Nick’s wife Lara, and Parvez, a local web designer, have more mundane motives. Thus the question arises: can parents really do it for themselves? As the group meets Polly, a Whitehall civil servant, the personal and the political become a potentially explosive mixture.

At its best, Waters’s play is a witty and well-observed account of middle-class ambition, hypocrisy and naivety. He confidently delivers a couple of excellent scenes, in which ideas about Free Schools are debated within the context of David Cameron’s Big Society, and there is plenty of satirical humour to be squeezed from the parents’ encounters with Polly. At the same time, it gradually becomes apparent that there is an unreconciled tension between two strands of the drama: Rachel’s personal problems with Martin and her involvement with Nick and the rest. The result is that the play is overcomplicated and lacks a satisfying dramatic conclusion.

Politically, Waters is clearly sceptical about all sides of the argument. The Free School activists are presented as hard-working but a bit eccentric, fractious and ultimately unable to agree among themselves. On the other side of the argument, the supporters of the status quo in schooling, such as Martin, are shown to be old-fashioned and reliant on the unions and health and safety regulations. In the middle, the young schoolboy Sam is clearly having a bad time.

In his research for this story, Waters consulted journalist Toby Young, the media-savvy poster boy for the Free School movement, and parts of the play have the aura of authenticity. But other parts don’t. It surely strains credulity that this group would have no one with an educational background in its original set-up, and how could they possibly have a fevered discussion about private investment and their own admissions policy on the eve of getting government funding? Likewise, surely no Free School group would bring in a bunch of local kids just when a civil servant is inspecting their new premises.

Still, there is much pleasure to be derived from Nathan Curry’s production, which is designed by Signe Beckmann, and especially from Claire Price’s sterling central performance as Rachel. Price is good at being radiant, she is good at breakdown, she is good at steely determination. It’s her evening. At the same time, Nick and Lara are convincingly played by Andrew Woodall and Susannah Harker, while Joanne Froggatt’s Polly is hilariously entertaining. Little Sam is played by Otto Farrant. Despite its flaws, Little Platoons is an engrossing state-of-the-nation play about a contemporary issue that is unlikely to go away.