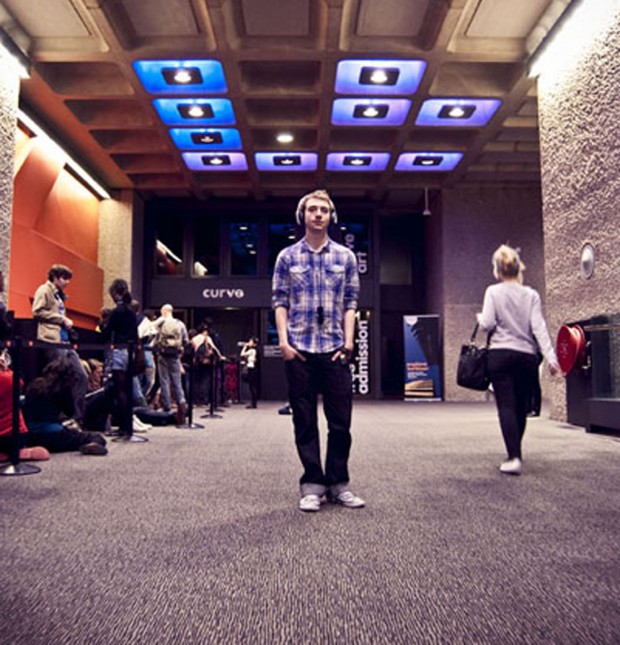 Is there such a thing as iPod theatre for a new digital generation? Given the enormous boom in site-specific performances and the growing use of electronic gadgets, the answer seems like yes, and this new show by non zero one — a group of recent graduates from Royal Holloway, University of London — is billed as an interrogation of the “new methods of communication that are designed to connect us over huge distances and in all scenarios”. An example of participant theatre, the 50-minute piece, which opened today, is a good illustration of both the highs and lows of experimental performance.

At the start of the show, the audience of six participants is fitted out with headphones which are connected to a small iPod individually pinned to your clothing. After a quick briefing, we set off along individual paths into the vast open spaces of the Barbican Centre’s foyers, bar, stairwells, and finally — in my case — into the welcoming sunshine of a bright spring afternoon in the outside seating area. Over the headphones, a voice — in my case a young woman — tells you where to go, and suggests some fleeting thoughts about how we long to connect with strangers — only to find that they are too busy listening to their iPods to pay us any attention (I’m paraphrasing here, but I’m sure you get the drift).

Although being invited to be part of BITE is a great opportunity for such a new theatre group, it has to be said that the Barbican Centre is not the most interesting environment in the world to explore. Led by the silky voice, we make the most of the long expansive foyer, the occasionally curious architectural features, and the orange signage. But fear not, it’s not all gazing: you are given several tasks to do. At one point, while in a phone booth, I have to scribble down brief notes about who I am on a post-it note and communicate these to another participant who is in an adjacent booth. Written down, it sounds much sillier than it is.

At another point, I was part of a brief scene with an actor who played a member of the bar staff. I was prompted to order a drink, he deliberately brought the wrong one, and then I was prompted again to conduct a short conversation with him. Those shrinking spirits who don’t like to participate should give this show a miss. Things also went wrong, which of course only underlines the liveness of live art. I passed a message to a mysterious stranger who remained mysterious because he or she failed to turn up. It’s possible to get muddled by the instructions, and to lose your way.

At one point, I was asked to shout “hello!” at a woman, played by one of the actors, who was standing across one of the Barbican’s open spaces. Bearing in mind that, with headphones on, it’s quite hard to control the volume of your voice, and that there were several people milling around between me and her, this was the moment when I bottled it. Instead of shouting out, I crept nearer and whispered… Not quite the same thing. (I also bottled out of sliding down one of the Barbican’s wide chrome staircase handrails.)

This show is a clever mix of mildly daring tasks (like being asked to sit with your eyes closed in a public space) and richly evocative and pleasurable music (by Robert Logan). Some moments are quite beautiful, simple, and these serve to awaken a sense of wonder in our mundane surroundings; others are a bit more anarchic and silly. I tripped over once, and later on a random member of the public asked me where the Exit was — what should I expect, given that I was just hanging around, listening to my headphones?

Would Like To Meet will appeal more to idealistic youngsters than to hardened cynics. At its heart, it is an attempt to make the boring spaces of everyday life shine a little more brightly with thoughts of meeting beautiful strangers and, just when you might actually succeed in doing this, make you feel a slight twinge of loss. But it is slight. A chance meeting that never happens. A story that never gets beyond the opening sentence. For a few minutes, the show gives you the quiet leisure to think about your own identity and your own desires. It may not be the future of theatre, but it does have its tantalisingly pleasurable moments.