Home » Reviews » The Last of the Haussmans, National Theatre

The Last of the Haussmans, National Theatre 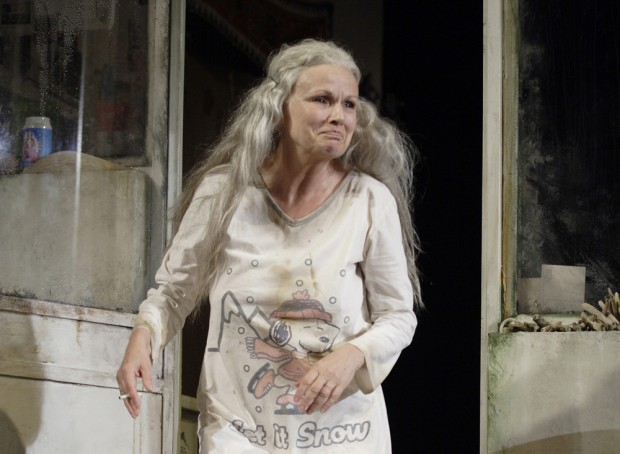 When does an urgent new trend become a theatre cliché? Over the past couple of years, the idea of generational conflict between the have-it-all baby boomers and the have-nothing-but-debts youngsters has appeared in plays such as James Graham’s The Whisky Taster and Mike Bartlett’s Love, Love, Love. Now the South Bank flagship, in a production starring national treasure Julie Walters, enters the fray with actor Stephen Beresford’s first play, which opened tonight.

This time, we are on the Devon coast. High-society dropout Judy (Walters looking like a cross between Mystic Meg and a white witch) was a 1960s hippie who explored her inner self and wanted to change society; now she lives in the crumbling family home. Coming back from hospital after a cancer operation, she is joined by her children: the practical but lonely Libby and Nick, a damaged, gay ex-junkie. Also in attendance is Libby’s teenage daughter Summer, and Peter, a local doctor and family friend. Daniel, a young man with problems of his own, pops in to use the pool and is an object of attraction.

Over several summer months, the plot creeps forward. The decaying house must be tidied up, the arguing siblings must be reconciled, and Judy will have to say bye, bye to life. Over drink after drink, and fag after fag, various questions pop up: who is Peter pursuing? And who will get to snog Daniel? Wait a minute, what’s this about the house? Yes, it appears that there’s going to be a struggle over the ownership of this prime asset. That’s better — don’t we English love conflicts about property? But, no, sadly this dispute remains in the background. What a shame; what a drag.

As well as being a rather traditional family reunion play, The Last of the Haussmans also explores the generational conflict between Judy, and to a lesser extent Peter, who were once hippie revolutionaries, and the more conservative siblings. In the best scene of the play, this catches fire and the idealism of the oldies clashes with the cynicism of Libby and — especially — Nick. For a moment, the ideas blaze and the stage lights up, but then, like a camp fire made of paper, it all dies down again.

Beresford’s vision of the 1968 generation, of spiritual hippies and angry radicals, seems sadly lacking in guts. According to this play, the followers of Bhagwan Shree Rajneesh were all misguided, and all hippies were irresponsible drug-takers and foolish dreamers. Like Judy, they were deluded and out of touch. Of course, this attitude is conducive to easy comedy, and there was some raucous laughter on press night. But to me it feels as if a complacent and cynical audience is simply being encouraged to mock the very idea of social change — as if society today was the best of all possible worlds.

The closer you look at Beresford’s text, the more full of holes it appears. This is family drama lite, with a predictable smattering of dull jokes and clichés. It is weak, trite and unengaging. And all too often the actors seem to agree. At first, Walters comes across less like an antiquated hippie and more like a fine actor incredulous at having to say such poor lines. Where am I, and what am I doing? Rory Kinnear as the helpless Nick starts out looking equally lost. We know his character is troubled, but it’s his performance that appears uncertain. Although Helen McCrory’s Libby and Matthew Marsh’s Peter are noticeably more grounded, the unevenness of the performances is still evident.

Howard Davies, normally a powerful director, here proceeds at a funereal pace and the story plods along in all its linear predictability and domestic naturalism for a full two hours and 45 minutes. To while away the time, you can always savour Vicki Mortimer’s set, an appealingly ramshackle affair, and — all right — some of the jokes are mildly amusing. Visually, Walters looks like a wonderfully monstrous creation and McCrory occasionally does touch the heart. But there’s too much shouting, too little conviction and too many barbituates in the mix (well, that’s how it feels anyway). Ab Fab it certainly ain’t.