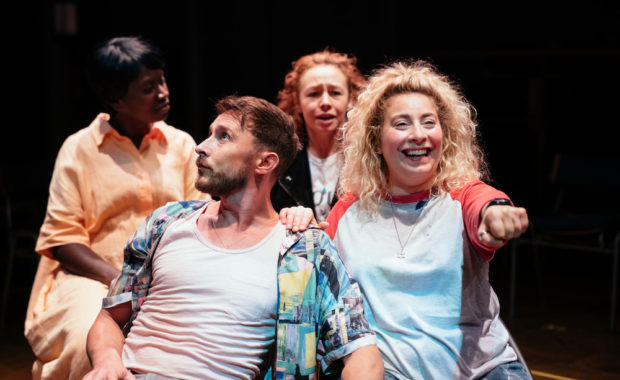 It is typical of the times we are living in that it took me two attempts to see this energetic revival of Bryony Lavery’s 2004 play, Last Easter, at the Orange Tree Theatre. (My first go was scuppered when one of the cast had COVID-like symptoms and the performance was cancelled — they tested negative so the run quickly resumed.) This was also compounded by South-Western trains, which almost failed to deliver me to Richmond in time. I arrived in a big sweat. As usual, the socially distanced production, with almost everyone in mandatory face masks (which makes me feel safer), produces an atmosphere in which the themes of disease, death and the miraculous come across strongly in Lavery’s story, which, after premiering in New York, was previously also staged at the Birmingham Rep in 2007.

This two-part drama, with each half taking place at Easter (highlighting its Christian symbolism of redemption and resurrection), explores the relationship between four friends. When June, a successful lighting designer, discovers that her breast cancer has spread throughout her body, and that she is terminally ill, Gash and Leah decide to take her to Lourdes in an attempt to get a miracle cure. They are a lively duo, Gash being a compulsively joke-telling female impersonator with a love for Judy Garland, and Leah a Jewish American prop maker. To keep costs down they also invite Joy, an actor with a drink problem exacerbated by the suicide of her lover, Howie, whose memory continues to haunt her. Together they hire a car for a road trip that is partly a comedy of modern sensibilities, with plenty of queer notes, and partly an exploration of the notion of hope in the face of personal disaster.

As June’s condition gets worse, the idea of a miracle, whether religious or scientific, is clutched at, thrown about, and finally — as you would expect — evaporates into thin air. But while it is present, Lavery shows how this friendship group is open-minded to the notion of prayer: Gash, who is a Roman Catholic leads Leah, who chants in Hebrew, and Joy, who goes for the Buddhist option. In vain. If they have to acknowledge that God is not listening to them, at least they have tried, however comically, to combat June’s disease. At the same time, the play is both enthralled by, and satirically sceptical of, the whole Lourdes experience. While there is something so human, and so moving, about the huge queues of hopefuls at the shrine of Saint Bernadette, it is also true that everyone will be disappointed. Terminal illness needs medical miracles, not spiritual ones.

And yet. In the second half, in the last Easter of the play’s structure, June has to confront not only the fear of a painful death, but also the possibility of assisted dying, a theme which incidentally Nick Payne’s Constellations also touches on. Perhaps both should be renamed Consolations. The different reactions of June’s friends are charted by Lavery with an appealing mixture of humour, sometimes taboo-busting, often bleak, and perceptive emotional intelligence. She writes in a light but deeply felt way that draws you into the situation, helps you empathize with the feelings of the characters, and makes relevant political points about the right to die with dignity. At the same time, she is also aware of the stresses and strains that life-changing events can have on everyone involved — with death there are no bystanders.

Last Easter is packed with contrasts and comic tensions. The fact that the characters are theatre people gives the storytelling a self-conscious zing as well as allowing for lots of in-jokes, but Lavery also brings in other material. At one point, June talks beautifully about Caravaggio’s use of light in his painting of The Taking of Christ. Although she is an atheist — and certainly not very enthusiastic about the Lourdes option — she can, and does, appreciate the beauty of holiness. Her cool, dry personality, turned inward by her experiences of terminal disease, contrasts well with the flamboyant, all-singing and all-joking Gash, with Leah being more down-to-earth and Joy both loudly inebriated and often stricken. The show has a fast pace, which enables it to jump from silliness to seriousness in the mid-sentence — a great feat.

Tinuke Craig’s spirited revival, on designer Hannah Wolfe’s bare stage, makes good use of Elliot Griggs’s lighting to convey the metaphorical sense that light is life, whether in Caravaggio’s depiction of heavenly rays, or in the sunlight of a spring day. With four office chairs as the main props, plus a small plastic madonna, electric candles, shining lightbulb moment, green jungle vines, and a croaking tree frog, the focus is nevertheless, as it should be, on the four actors. Naana Agyei-Ampadu is really impressive as June, a controlled and emotionally intelligent presence who can move you to tears. By contrast her friends, Peter Caulfield (Gash), Jodie Jacobs (Leah) and Ellie Piercy (Joy) are, in turn, exuberant, irrepressibly silly and occasionally, but only occasionally, level-headed. By the end, Lavery’s certainty that friendship and love are life’s true miracles is quietly and effectively realized.