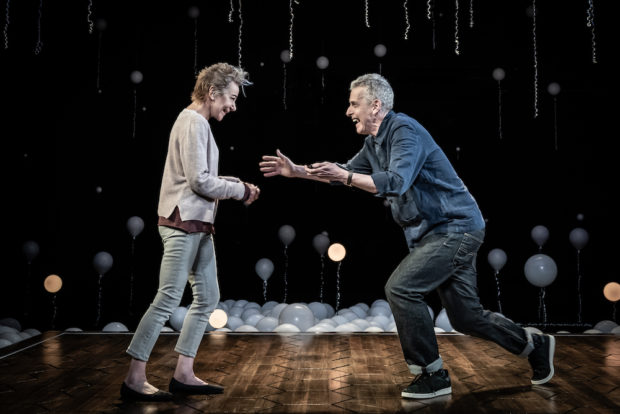 On Friday, I finally caught up with Michael Longhurst’s restaging of his 2012 Royal Court production of Nick Payne’s Constellations, a gem of a two-hander. Produced this time by the Donmar Warehouse, where Longhurst is artistic director, the performances are split between four casts — Sheila Atim and Ivanno Jeremiah, Peter Capaldi and Zoë Wanamaker, Omari Douglas and Russell Tovey, and Anna Maxwell Martin and Chris O’Dowd — a gesture which in itself exemplifies the central theme of the play: that life has infinite possibilities. Roland, a beekeeper, and Marianne, a theoretical physicist, meet at a barbecue; they go home together; they move in together; one of them has sex with somebody else; they separate and meet again at a dance class; he proposes marriage. Each of these episodes is presented in different variations. In the present, she is diagnosed with a brain tumour, and the couple face stark choices. Not only does Payne write scenarios that cover about four or so different realities — the multiverse of advanced theoretical physics — but he also presents this through an engagingly fragmentary time structure. If in the now of the present there are infinite possibilities, only our free will determines the future. Or is this a delusion? In the current pandemic the material about death and dying comes across particularly strongly. I saw the Capaldi and Wanamaker pairing and the performances are superb. As a senior cit myself, I strongly felt the playfulness, frustrated anger and bleak sadness of their characters. These older people carry inside themselves their younger selves, which peek out very now and then to often humorous effect. The bit in the playtext about a 24-year-old lover made the whole audience laugh. Longhurst’s direction, on a balloon-covered universe-suggesting set designed once again by Tom Scutt, has a clarity and vividness which uses lighting effects to guide us through the shifting time jumps. This version, staged at the Vaudeville Theatre, is a sad, beautifully crafted and slightly melancholic reading of a story that is both devastating and life-affirming,