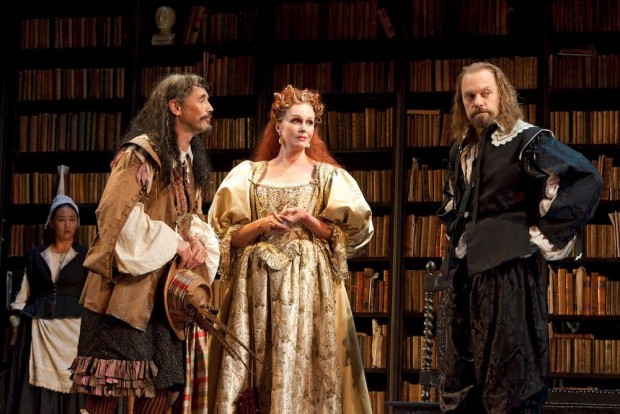 The Comedy Theatre in central London’s West End has reinvented itself as the home of verse drama. Last year, it was the venue for a revival of Martin Crimp’s The Misanthrope, in which Keira Knightley got her slim jaws around some highly sophisticated lines. This summer, it is the turn of American Broadway playwright David Hirson’s pastiche La Bête, originally staged in 1992, which gets a revival aided and abetted by actors Mark Rylance and Joanna Lumley. This time, although the verse is worse, the acting is better.

Although Crimp’s The Misanthrope was a thrilling contemporary updating of Molière’s 17th-century original, La Bête is a piss-take of the French playwright. We are in Deep France (Languedoc to be precise) in 1650-something, and the action kicks off when Elomire, an elite playwright and leader of a troupe of actors, is asked by his patron to accept Valere (Rylance), a vulgar crowd-pleaser, into his company. He has doubts — and it’s easy to see why.

When Valere arrives, with his crazy pirate-like garb contrasting nicely with the black, puritanical attire of Elomire and his companions, it soon becomes clear why no one can stand him. Valere is a total bore: he has logorrhea, and talks nonsense incessantly. In Hirson’s tour de force of frantic writing, he first monologues for more than half an hour, exasperating the serious Elomire, and driving the audience almost crazy: please stop, I found myself praying.

At the same time, especially in Rylance’s eye-opening performance, he is a great entertainer, a comic Falstaffian figure whose huge appetite for life is constantly compromised by his own inabilities. When he threatens to recite the Old Testament, he doesn’t get very far: his memory completely fails him. What he’s really good at is drinking, farting and rambling — his huge opinion of himself is a bubble that is constantly pricked, and usually by himself.

But when the Princess, played by Lumley, arrives, Valere performs his street-theatre act — and its raw energy and constant inventiveness is a joy to watch. To Elomire’s dismay, he is a wonderful joker, a marvelous populist. And, despite being a buffoon, he can still defend his art. By contrast, Elomire argues that this kind of entertainment is vulgar and worthless. His own plays, which we never see, are high art, refined and elegant.

This clash between two visions of theatre, high culture and low art, reminds me in its simple-mindedness of the work of Peter Shaffer, who also contrasts such stark opposites. Hirson skews the debate by showing Valere’s work in action but not Elomire’s — we simply have to accept that the latter is the great artist he claims to be. But although the debate is not exactly compelling, the play has many moments of great fun.

Not only is Rylance excellent in his manic energy and sheer excess, but he handles his lines with enormous clarity and punch. Similarly, Lumley’s speeches are always comprehensible and strong statements of a patron’s power. After all, she who pays the piper calls the tune. I was less taken by Elomire, played by David Hyde Pierce of Frazier fame, whose characteristic monotone soon makes his lines soporific.

But although La Bête is not a patch on Molière, it does offer some incidental pleasures: I particularly enjoyed the Princess’s realisation that her first impression of Valere as a marvelous magician of the theatre is not right. Yes, how transient are the pleasures of live performance. In general, Matthew Warchus’s well-considered production, beautifully designed by Mark Thompson, and Rylance’s vivid stage presence do more than justice to a moderately good play.