Home » Reviews » How To Date a Feminist, Arcola Theatre

How To Date a Feminist, Arcola Theatre 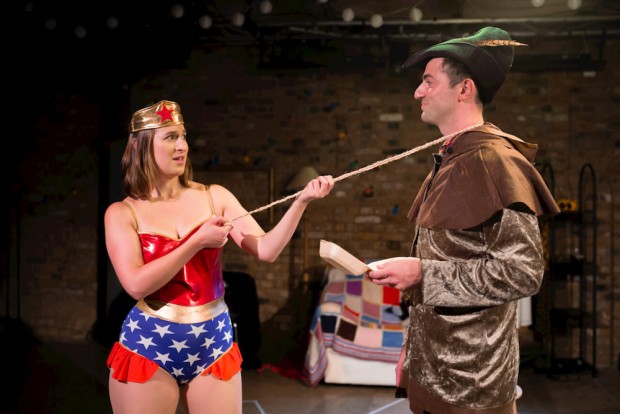 How To Date a Feminist is a great title, and you can see why this feelgood show by Samantha Ellis has returned after a first outing at this venue as recently as September. On the night that I saw this entertaining look at gender stereotypes the audience was hooting with joyous laughter. The playwright, who also works as a journalist and reviewer, has also written How To Be a Heroine (published a couple of years ago), a memoir of her life as a reader of great romantic books such as Pride and Prejudice and Wuthering Heights, and it is full of her witty observations on what happens in them. So she’s ideally placed to pen this theatrical rom-com, which cleverly inverts the clichés of the genre, and thereby heightens the comedy of love, marriage and breaking up.

The play starts in the middle of the story, with Steve, a thirtysomething baker, pulling one of those surprise marriage proposals on his new girlfriend Kate, a thirtysomething journalist. There he is, on one knee, but instead of an ardent speech, he starts apologizing for the patriarchy. So the twist is that Steve is more of feminist than Kate, and you can soon see why. His mother Morag, a Scottish activist, spent six years protesting against American missiles at Greenham Common, and this is where Steve grew up. And now he wants, more than anything, to be a New Man. He tries so hard to be gentle, considerate and not at all macho. He is also a veggie and doesn’t dance.

But Kate is the opposite. Despite the fact that she is one of a handful of women in her office, and therefore used to sticking up for herself, she is also very attracted to bad boys. She loves Heathcliff, and wants to be rushed off her feet sometimes. But Steve, attractive as he is, doesn’t do grand romantic gestures. And his seduction technique is a series of “May I”s that sounds like a real turn off. Kate’s previous lover was Ross, her editor and a bit of a sexist bastard. So, as Ellis jumps back in time to show how Steve and Kate met, we can see the debate taking a clear line: can men really be feminists? Why are some nice girls attracted to bad boys? How do you balance the head and the heart?

At the same time, Ellis also smuggles in another, potentially profounder point, about whether people are able to change, and how much control we have over our ability to alter our characters. Kate’s father, the Israeli businessman Joe, thinks that humans don’t really change, while Morag seems to have proved that it is possible for a single woman to bring up a loving, and feminist, boy. But can Steve change his behavior to suit Kate’s desires, or can Kate change her feelings to suit Steve’s sensibility? Well, as the jokes fly around the studio theatre, there’s everything to play for.

The best thing about How To Date a Feminist is that the first half an hour or so of this 90-minute two-hander is extremely funny. It’s enjoyably humorous because Ellis is exploring the thoughts and feelings that most contemporary couples have had, and her rapid portraits of the parents tell us all we need to know. It’s a very warm show, without a streak of cruelty and with plenty of recognizable quirks of psychology. If the pace slackens in the second half, there are still plenty of telling moments.

Matthew Lloyd’s production starts off with a splatter of one-liners well delivered, with Sarah Daykin and Tom Berish both excellent at the multiples roles they embrace: She is not only Kate but Morag and Carina, Steve’s ex, as well, while he plays Steve, Ross and Joe all convincingly. Designer Carla Goodman has come up with some good ideas for the set-piece fancy dress party and wedding scenes, while Lloyd’s decision to keep all the props in view and have the two actors swap costume in full view means that the pace remains bright and jolly throughout. Because this is a rom-com, the plot is nice and predictable, and if the play doesn’t really trouble any taboos, that doesn’t detract from its ability to deliver a fun evening.