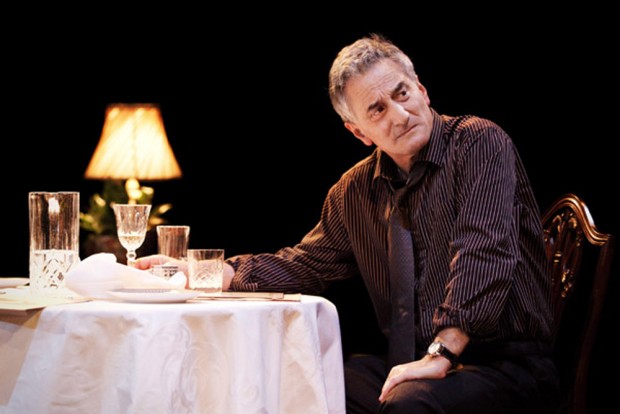 Home truths have a unique power to grab at your entrails and tear at your peace of mind. But so often, in so many families, the truth remains too painful to acknowledge, and togetherness is bought by means of keeping secrets. And, of course, in any family drama worth its salt, those secrets will inevitably come tumbling out. On stage, the effect can be both thrilling and emotionally powerful, as evidenced by Ryan Craig’s excellent new play, which opened tonight at the National Theatre.

Set entirely in the Rosenberg home in Edgware, lovingly designed by Jessica Curtis, the story begins with a visit from the local rabbi on the eve of a family funeral. We soon gather that one of the sons, Danny, has been killed fighting on the Israeli side against Hamas, and that his sister Ruth — who works as a human rights lawyer in Geneva — is regarded as a traitor by the Jewish community because she’s working on a report into war crimes in Gaza. Meanwhile, another son, Jonny, is completely different: he just likes to have fun. But how come he keeps getting into fights?

Now it’s time for the family patriarch, David, to appear. Once a successful kosher caterer, and now the head of a failing business which has still not recovered from a dreadful scandal, he is hoping to bounce back by finalising a deal to cater for the wedding of the daughter of a childhood friend, Saul. Yet, predictably enough, salvation is not so simple, and by the end of the evening, all the main characters have had a taste of the bitter bile of truth.

Craig is a writer who loves ideas, and this play buzzes with discussion and debate. But the politics are always personal. David’s desire to be respected, and supported, by his local community, is sharply questioned by his wife Lesley, who points out that the family name has been tarnished not only by the catering scandal, but also by the politics of their daughter Ruth. Likewise, Jonny’s desire to set up a gambling website runs counter to his father’s hope that he will join the family business.

All the characters are eloquent in putting their points across, and Craig is immensely fair-minded in giving room for every shade of opinion. The question of whether a Londoner like Danny should have gone to fight for a homeland that isn’t really his own is raised, and Ruth’s role as a lawyer — who speaks up for the Palestinians — is attacked and defended. The nature of the Israeli state is debated, with representatives of the local community, who defend it in the face of what they see as a terrorist threat, clashing with more liberal shades of opinion. I found this immensely absorbing and anyone who admires the work of Henrik Ibsen or Arthur Miller will find much to enjoy here.

As the arguments go to and fro, a picture emerges of the north-west London Jewish community that is both nuanced and critical. Moments of solidarity are mentioned, then revealed to be misremembered; tough times are recalled, and the weight of history acknowledged. There’s also a strong sense of a social group that is highly intolerant of any member who doesn’t conform. The Rosenbergs are openly told that if they don’t keep Ruth under control, then the whole family will suffer.

The most fully developed character, of course, is David, the head of the family. Craig’s portrait of him shows a man at the very end of his tether. Plainly, on a good day, he can be great fun, an amusing storyteller and a passionate and generous individual. He’s both full of bubbling life, and also — because of his son Danny’s death — is definitely suicidal. Gradually, the real reason for his manic behaviour becomes clear, as the plot screws are turned tighter and tighter.

The Holy Rosenbergs is a traditional play in that it clearly sets out the main moral questions in the first half, and then delivers the answers in the second. In doing so, it gradually but relentlessly deepens its emotional hold on the audience and finally creates an almost unbearable sense of tragedy. Much of this is due to Laurie Sansom’s well-paced and intelligent directing, and the strong performances of his cast. Henry Goodman clearly shows the contrast between David’s windy bluster and his sudden collapses of confidence, while Tilly Tremayne’s Lesley is perfect as the hectic mother, constantly using food to buy affection. Similarly well played, and well matched, are Susannah Wise’s coolly intellectual Ruth and Alex Waldmann’s wild and erratic Jonny. In the clarity of its construction, the tension of its climax and the slow unveiling of its emotional core, this is a very fine play indeed.