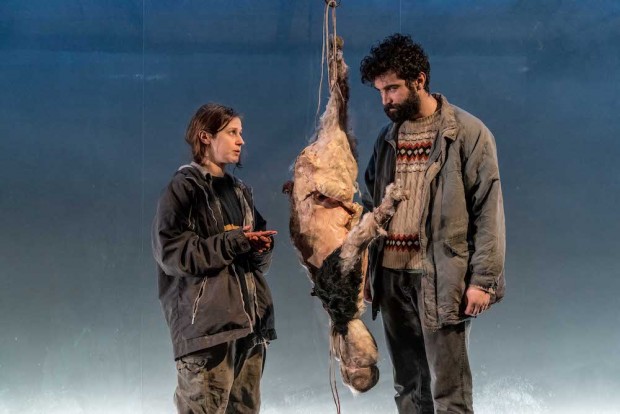 First the goats, and now the sheep — has this venue become an urban farm? Rural life, which was once so central to our English pastoral culture, is now largely absent from metropolitan stages. And from our culture. Apart from The Archers or the village gothic of shows like The League of Gentlemen, the countryside has become a lost world, a blank space on which any playwright can project their imaginary stories. So Gundog, Simon Longman’s Royal Court debut, comes across not as a real account of farming folk, but as a highly symbolic rural no-space of shepherds and sheep in a forgotten corner of these isles, a place of depressing decay and desolation.

In the middle of this muddy nowhere, two sisters — chatty Becky and sulky Anna — eke out a desperately poor living, with a herd of sheep and a family business that barely supports them. Their living conditions are appalling, their sheepdog is dying and Becky has dropped out of school — it’s a picture of no-hopers on the edge of subsistence. Hard, hard work and no play. To make matters worse, their brother Ben is a useless individual and their grandfather Mick is slipping into dementia. The only optimistic ray of sunshine is Guy Tree, the improbably named migrant worker who stumbles across the farm, which lies beyond the edge of hope. This sturdy foreigner agrees to help out — and for a moment things look like they might take a turn for the better.

But only for a moment. Soon disease infects the sheep, and Ben and Anna argue about who is to blame. Guilt spreads like an infection through the whole family. Mick’s dementia gets worse, and the situation calls for desperate measures. Sheep rustling provides the improbable solution. Hard, hard work and no play. Longman’s play starts off promisingly with a mixture of comic exchanges and flinty dialogue vaguely reminiscent of an Edward Bond or a David Harrower, but it soon runs out of pace. Despite the grim humour, and boy is it grim, the text settles into a repetitive litany of misery and muddled inconsequentiality. Symbolic plays are okay, but they have to mean something; they have to have resonance and relevance. Gundog has neither, and it also lacks both drama and plot.

One of the problems is that this symbolic farm in a symbolic no place has no social context. Although the characters have mobile phones, there is no contact with the outside world. The place seems to exist in a post-apocalytic isolation that is unexplained and simply unconvincing. Worse still, the characters — despite the solitude of their situation — say precious little about the specificity of their lives and feelings. They have no back story. Their emotions seem generalised and opaque. And not in a good way either.

So although there are some magic realist ideas in the folds of this depressing tale, with bone-splinter insights into the slowness of rural time, the way time stops in silence, and the feeling of still points in a turning world, these are lost in the frustrating repeats of the talk. Not even the passages about the cruelty of animal husbandry, and an excruciating lambing scene, can relieve the tedium for long. It’s all just hard, hard work and no play. Despite Becky’s dolphin dreams, the comedy of Mick’s silly stories and the family antagonisms, the effect is one of barely relieved dreariness. Barren of laughter. Hard, hard work. Although the 100-minute play has a sophisticated time structure, in general it feels both cold and comfortless.

Even the conflict between the English lout Ben and the foreign migrant Guy — so symbolic of the tensions that have brought us Brexit — is too casual and unfocused. Nor does Vicky Featherstone’s rather slack production, on Chloe Lamford’s mud heap of a set, deliver any tension or theatrical pleasure. Only the weird bundle of fur, feet and wool that represents the sheep and the dog is memorable (this will go down in history as “the play with the dead sheep thingy”). Sadly, Ria Zmitrowicz (Becky) and Rochenda Sandall (Anna) fail to bring the sisters to life, and Alex Austin’s Ben is only occasionally gripping. It is left to Alec Secareanu as the sympathetic Guy and Alan Williams as the aged Mick to give us a reason to keep watching. But that really is not enough. After Goats in December and now Gundog, surely it’s time for this venue to head back to the city.