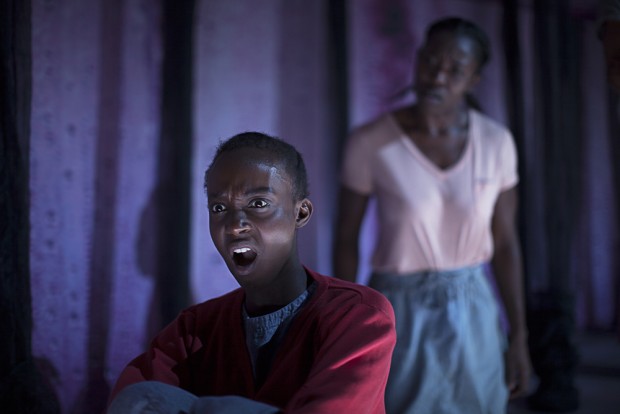 Hostage dramas can be very tense, but they are also very predictable. Once the victims have been abducted, they have only two choices: they can either escape physically, or escape into the world of fantasy. In Theresa Ikoko’s debut full-length play, Girls, the imprisoned teens also discover another possible choice: they can embrace the world of their captors — the so-called Stockholm Syndrome. Based on the kidnap in 2014 of more than 200 schoolgirls in the Nigerian town of Chibok by the Islamic terrorist group Boko Haram, this play examines the fate of three of the victims.

The play, which won the Alfred Fagon Award and was joint-winner of the George Devine Award, looks at the life in captivity of Haleema, Ruhab and Tisana, three young teens who have been abducted and are now living in a camp deep in the north Nigerian countryside. They have been friends since childhood, and each is clearly characterised: Haleema is practical, worldly wise and sexually knowledgeable. She makes a knife and plots to escape. Ruhab is less independent and gradually begins a relationship with one of their captors, accepting some of his Islamist doctrines and her role as a secondary wife. Tisana, the youngest, is the most naive and childish, but also determined. She refuses to renounce her Christianity, despite the daily beatings that she is subjected to.

Ikoko begins the play by showing that the three girls are both giggly teens and, due to their kidnap, mature beyond their years. To keep some “silver lining on the storm clouds” they play various games, humorous fantasies, with spirited parodies of American television shows and memories of church services back home in their village. Although they have only been abducted for a month, their past life already seems to be moving out of sight. One fears that her parents have been burnt alive, another hopes that some family members have survived and might come and rescue them.

Although most of the dialogues are brightly naturalistic, the central situation is more symbolic than realistic. Ikoko focuses solely on the three girls, with no other characters intruding, and she gives them a degree of privacy that the real victims probably haven’t enjoyed. While it is clear that they are victims, these are very spirited portraits of lively teenagers. Meanwhile, events in the outside world — from Boko Haram’s filming of hostage videos to the need to keep moving on — are conveyed by a sharp, loud, even painful, percussive soundscape that is chilling in its brutality.

Within the confines of her chosen situation, and for most of the play’s 80 minutes of running time, Ikoko portrays female friendship in difficult times. The girls begin to argue over who is in charge, and ask what is the price of survival? Haleema wants to plan an escape, while Ruhab believes that co-operation will give them the best chance of staying alive. What is interesting is the idea that deep trauma has put the moral sense of the three youngsters under immense stress. And the danger of their situation is forcefully conveyed. They are victims not only of religious fanaticism, but also of male domination. As Tisana says at one point, “This world is not for girls.”

Written with imaginative empathy, and with an understanding that in the globalised media world every part of the globe is familiar with Beyoncé and the Olympics, Girls is directed by Elayce Ismail in a co-production for HighTide, Talawa and Soho Theatre. On Rosanna Vize’s simple set, whose colour palette of pinks, purples and mauves suggests the youthfulness of the girls, the acting is uniformly good. Anita-Joy Uwajeh’s Haleema has the strongest stage presence, and she sugggest touches of vulnerability behind her character’s apparent certainty. Similarly, Yvette Boakye’s Ruhab and Abiola Ogunbiyi’s Tisana offer contrasting responses to the events that have beset them. The female friendship of the story is mirrored in the actors’ sympathetic interactions. But although this short drama helps to humanise the situation behind the headlines, its ending is as hard and as intractable as the subject it is concerned with.