Home » Reviews » The Girl in the Yellow Dress, Theatre 503

The Girl in the Yellow Dress, Theatre 503 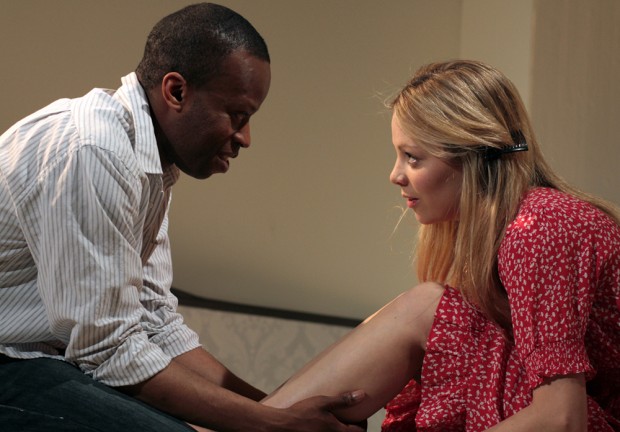 Ethnic tensions in France have been in the news this week, with the siege of the gunman Mohammed Merah, so award-winning South-African penman Craig Higginson’s new play seems really timely. First seen in this country at the Salisbury Playhouse, and opening tonight at Theatre 503 in south London, this story about the relationship between a French-Congolese student and an English teacher during a hot Parisian summer is full of emotion, and ideas.

Set in the chic flat of Celia, an attractive young teacher of English, this two-hander is a story about her encounter with Pierre, an equally young student who wants to learn this global language. At first this seems like a play about racial politics, but very soon it develops into something much more ambiguous and, in the end, disturbing. The warning signs are there early on: Pierre says that he has admired Celia from afar, and admits to following her. Is he a sinister stalker? Or is that just our racial stereotyping? And is she really so innocent? As their relationship grows, both of them start telling each other stories from their different pasts. Once again, at first these seem to be the usual experiences of African horror and English dissatisfaction, but gradually such banal initial impressions are modified by fresh and very surprising revelations. As Celia says early on: “The actual facts are not always important. It’s how we present the facts that matters more. It’s not important that my story is half fantasy.”

Celia is, after all, a language teacher, and this is a play about language, communication and the relationship between truth and lies. Truth and fiction. Truth and fantasy. Throbbing through the dialogues is the idea of sexual desire as a disruptive force, an uncanny pulsation that upsets expectations and tugs us to go down dark alleys and up crazy pathways. Higginson’s conception of the story contains a strong sexual charge, and more than just a hint of perversity. But who is really lying to whom?

This is a drama about racial power relations, with a white teacher and black student, but it is also a play of ideas in which a proud and touchy black man confronts a neurotic and insecure white woman. There is a lot of psychological material about incestuous attraction, kleptomaniac tendencies and voyeuristic fixation. Metaphors are constantly being formed and then obscured by the grammar of the rather charming language lessons that make up the 90-minute play’s five scenes, each of which is named after a part of speech: the passive, narrative tenses, the conditional.

This interest in language gives the play text a French sensibility, with its frank discussion of verbal meaning, its philosophical asides and its accounts of disappointments in desire. In this rendezvous, Anglo-Saxon politeness is a sheet of blank paper that is ripped up, scrunched up and thrown into a wastepaper bin. At times, it’s as if the text has taken a sip of very strong coffee, and it zips along with impressive zest and intelligence. At once an exploration of our darker sides and an acknowledgement that some experiences defy words, this is a thrilling, humorous and endlessly surprising piece.

Directed by Tim Roseman, one of the two artistic directors of this venue, on James Perkins’s evocative Eiffel Tower set, the drama is played with restraint, perhaps too much at times, and the literary formality of some of the text pulls the characters from the edge of madness. Fiona Button (from the BBC’s Lip Service) and Clifford Samuel are well matched, she rather petite and at first gently glowing while he is strong and seductive. But slowly his confidence is drained and her nerves are shredded. It’s erotic, exciting and thought-provoking. The Girl in the Yellow Dress might originally have been written as a metaphor for the state of today’s South Africa, but it is also a metaphor in a much more universal sense: it’s about how we dare, or not, to face our darkest sides, and it’s as much about mutual guilt in relationships as it is about race relations. Either way, it’s brilliantly written and very well played. Once again, Theatre 503 has discovered a winning playwright, and a winner of a play.